Dark Matter Trailer Blasts Off Into the Unknown

So what if you suddenly woke up in the middle of freakin' outer space with no memory of how you got there ... or who you are at all?

That's the central mystery of Dark Matter, Syfy's upcoming sci-fi thriller series based on the graphic novel of the same name by Joseph Mallozzi and Paul Mullie (which, interestingly enough, was originally conceived as a television show before being picked up by Dark Horse as a comic book).

The story follows the six-person crew of a derelict spacecraft as they awaken from stasis with their memories wiped clean. As they try to come to terms with their situation -- and, indeed, themselves -- their instincts and skills kick in, slowly but surely revealing details of their identities ... and uncovering the nature of their "mission," which involves a cargo bay full of weaponry as their ship is en route to a mining colony that's become a war zone.

Check out the trailer below, which is chock full of existential dread, nifty action and proof, via Ferland's costume, that Hot Topic is still thriving in the far-flung future. 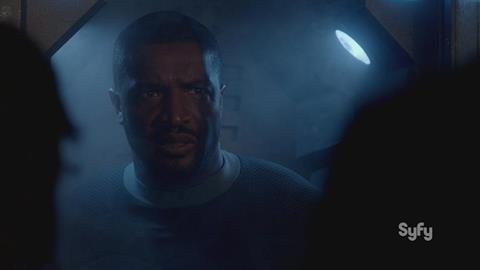