We can't believe it's Episode 9 already! A lot of crazy sh*t happened in this episode as a big lead up to our Season Finale. The crew goes to a sick concert, Marcus cheats on Maria with Saya, Willie skips town with Gabrielle, El Diablo finds Lin's house and *(SPOILER)* kills Lin's wife - you know, nothing major.

Missed the episode? No sweat. Get caught up with the top 5 GIFable moments from Season 1, Episode 9 of Deadly Class.

1. Enough Is Enough: Honestly, if we were Willie, we'd feel the same. After bringing him to Vegas and not really keeping him in the loop of what's going on, Willie always finds himself in these insane situations that jeopardize his safety. So natrually, he's no longer participating in the madness.

2.  Hangry Hangry Marcus: After the concert (and hooking up with Saya!), Marcus goes on a frantic, hungover run of shame to open the comic book shop. As he sprints through town, he replays the night before in his head, and steals a lady's burrito. Oh, you think that's weird? Don't tell us you wouldn't do the same thing!

3. Pay Attention To Me: MARCUS! STOP BEING HUNGOVER AND DRAW MIKE A PICTURE! After opening the comic book shop super late, Marcus is in no shape to work, let alone fulfill his promise to Mike (what a cutie!) and draw him a picture. The young lad has no idea what a hangover feels like (yet) so he has zero sympathy and no chill.

4. Surprise Surprise: This was one of our favorite twists in this episode. Since we rarely see Lin smile in Kings Dominion, this was clearly going to lead to something fun. In a showdown with his sister, Master Lin fools her into thinking that Viktor and Brandy are on her side. To our delight, they were working for Lin the whole time! Who's the king of Kings now, hmm?

5. Come With Me?: *Us everytime a friend asks us to do something wild* Gabrielle is in disbelief when Willie asks her to skip town and move to LA with him. Though a little shocked at first, she happily agrees and the two set off on an adventure to make a new life together. These are definitely not the plans we were making with our lovers in high school but we are so here for it. #Wilbrielle

Tune-in for the Season Finale next Wednesday at 10/9c to catch the latest episode of Deadly Class, only on SYFY. 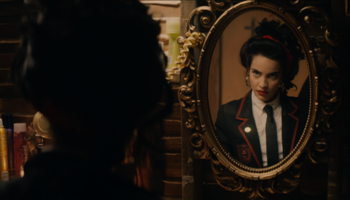