Don't Know Futurama? 5 Reasons Why You Actually Do!

An irreverant take on science fiction combined with goofy humor, and more hard science than you can wrap your puny head around. Nope, it's not Rick & Morty; it's Futurama. And guess what?! SYFY is its new home! Good news everyone!!! Starting on 11/11 You'll be able to watch every episode ever on your boob tube, and all of Season 1 (for you fancy digital folks) right here.

What's that you say. You don't know anything about Futurama?! The Planet Express has sailed on a show that's been off the air for 4 years? Well, bite our shiny metal asses! It's simply not true! Futurama will live on in the form of episodes, galleries, blogs (this one included) and the highest form of culture: memes.

So here's the bottom line, whether you're a superfan, you've caught a few episodes on Netflix, or you're a total Futurama newb; the show is worth watching and rewatching for the 100th time or the first time. It's a funny, razor-sharp show that has a surprising amount of heart. Don't say we didnt' warn you when you see Jurassic Bark for the first or even 1000th time. The tears with floweth. 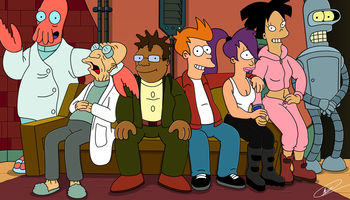