Last year Krypton arrived to SYFY in a way no one ever expected. It wasn’t a prequel per se, but an original story set 200 years before the planet would meet its well-known fate. With the clever use of time travel, Krypton upped the stakes and made people take notice (and if you haven’t seen Season 1, it’s totally worth the binge on the DC Universe streaming service -- the last five episodes alone will make any true Superman fan need to change their Underoos).

The Season 2 teaser trailer promised bigger and badder things to come and totally doubled- (or tripled-) down on its villains. This week, the first official trailer was released and has gone not only bigger and badder, but also BASTICH with the full live-action version of frag favorite, Lobo! As amazing as DC’s favorite bounty hunter is, the Main Man isn’t the only awesome thing in this trailer. Let’s break down all the cool bits you need to look out for. (Season 1 Spoilers Ahead!)

But first, get a load of Season 2: 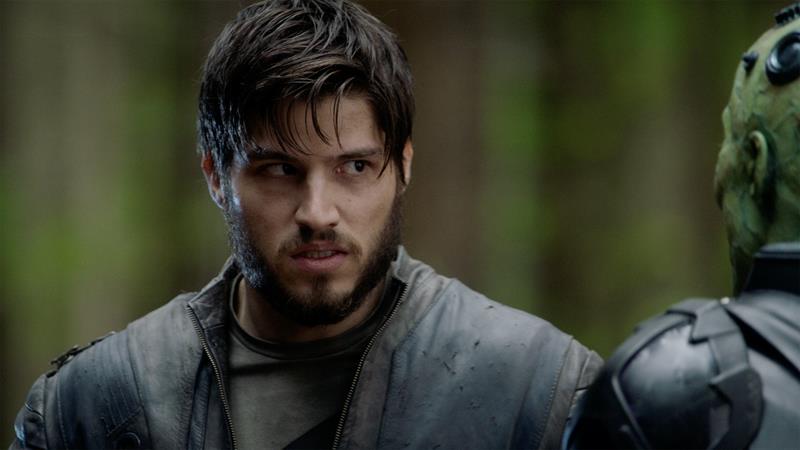 8. AN ALL-NEW (YET FAMILIAR) KRYPTON

It’s been six months since the events of the Season 1 finale and General Zod has been busy! The entire city of Kandor has been totally flipped into his vision of Krypton. The slanted lines on the walls and furniture bear a striking resemblance to Krypton and the Fortress of Solitude from the Richard Donner series -- only here the deep red color scheme has a more threatening feel.  (Side note: what’s with the new green look of the fortress?)

As much as we’re digging Krypton’s planetary makeover (according to Zod: “a Krypton unrecognizable in its perfection”), what's even cooler is that we are finally leaving the planet! Nyssa-Vex is seen taking a space elevator to the orbiting moon of Wegthor. Fans will know this moon from the comics, but we still have no idea what this means for Season 2!

Last season ended with Seg-El getting sucked into the Phantom Zone, along with big bad Brainiac. We haven’t seen much of the Phantom Zone in live-action before and this trailer teases some quality time on the inside -- and it looks as trippy as we hoped. Also, it appears that Brainiac is formidable as ever and his worrisome line, “You didn’t think it would be that easy, did you?” gives us chills, while we wonder what’s in store for Seg this season.

One of the hallmarks of Krypton is its amazing interpretations of some of DC’s famous villains. Brainiac is a spot-on take of Geoff Johns’ rendering on the character and Doomsday breathes the comic. Last season, we caught a glimpse of Doomsday in a cryogenic chamber, but this season appears to be giving us FULL-ON DOOMSDAY in all his glory and rage!

The Season 2 trailer promises heavy action, and lots of it! Val-El is leading a rebellion against Zod and we can assume epic battles at various locations -- and, to answer the obvious question, YES Doomsday will be smashing $#*%!

Seg-El was conflicted last season and who can blame him? Between losing his parents, learning his future grandson would become “Superman,” and discovering his connection to Zod, it was a lot to process – from being tasked with stepping into a hero’s role and deciding whether to save Krypton from eventual oblivion and having to ensure the existence of the greatest superhero in the universe. Based on the new trailer, we can see that Seg has continued to embody the hero we saw developing in Season 1 (and we’re really hoping it leads to an epic father-son battle royale)!

In a new universe where Superman doesn’t exist and things are all types of fragged up, it makes sense to introduce one of DC’s biggest troublemakers. Lobo has never been seen in live-action before and he proves to be quite the scene-stealer in the new Krypton trailer.

The image of Superman’s cape turning into Zod’s is to remind you that this show is now in a universe all its own. While Adam Strange was never going to just “Zeta Beam” Superman back in time to fix all of this -- now that isn’t even an option. We said at the beginning that Krypton was never really a prequel, and in Season 2 anything and EVERYTHING can happen.