Amid the war between the Rebels and Dru Zod's army, there are great moments in hair history occurring within each episode of Krypton. Get the 4-1-1 on how all the Season 2 looks came to be in this exclusive Q&A with Krypton's hairstylist, Sevlene Roddy.

SYFY: What was the inspiration behind the following character's hairstyles?
Sevlene Roddy:

Jax Ur's character strengths, along with her costume were some of the influences while creating her hair look for Krypton Season 2. I wanted to design something striking, edgy, bold, and sharp to cohabit with her extra sensory abilities and invulnerable strong character. I also took into consideration the sets which Jax Ur's character inhabits this season. The dusty, underground tunnels with dark moody lighting needed a hairstyle that would stand out with a strong silhouette. Almost to the point where in shadows we could identify Jax by her shape. The Mohawk shape gave a severe and prominent silhouette while allowing her profile to look powerful in shots revealing her bionic eye.

Jayna's story has developed and changed from her occassional soul agonizing military responsibilities to her time spent in hiding since she broke free from Kandor. Having left behind the legacy of iron clad duty in Season 1, I went about designing a look that would coincide with where the character was headed in Season 2. The dreaded hair and softened mixed texture reflected the growth of her character through isolation and time. This allowed me to add some softness around the face which we see in Jayna's character this year. She is still a strong fighter with unshaken mental strength. The strong lines and v-shape at the back and sides represent this and also Jayna's fundamental love to restore Kandor to its rightful glory and rid it of corruption.

In Season 2 Lyta is introduced to us as the new Primus of Zod's Kandor City and Sagitari Army. This, along with the new sets and costume of Kandor were my inspiration. I wanted to reflect the sharp, linear, structures of both the sets and her new Costume as General Zod's Primus. I felt that a sleek, severe, flawless, regimentally binded hairstyle would reflect seriousness and robotic nature of her new role. I maintained the strong shaved lines at the back as a nod to Kandor both past and present. I thought that the initial hairstyle was also a good point to show a progression to a softer look (flashback and fantasy scenes) and distressed look as her character and storyline changes throughout the Season.

I Used various wigs on Nyssa's character this year. As her character is initially introduced to us in Season 2, she's has been in hiding with her son, Cor-Vex (who's now named, Jor-El). She no longer has the call of servants and decedent splendor of the Kandor we saw her in Season 1. I wanted to keep her soft and regal at the beginning with a timeless beauty. The hair was then given more of an edge and broken-down tossed feel as her character developed. She goes through tough decisions and betrayals for the sake of her child and an unrequited love with Seg. For these reasons I felt Nyssa's hair changed and developed throughout the season as she takes on more physical challenges and emotional ups and downs.


For Lobo's hairstyle I took inspiration from many things on the creative journey to the final look we see in Krypton Season 2. I researched different artists illustrations from over the years, of which there were a lot of image variations. I also took inspiration from actor, Emmet Scanlan, who played Lobo in Krypton.  He was kind enough to show me how he would play Lobo, his moves, mannerisms and most importantly, overall character presence. I wanted to stay loyal to DC fans and various illustrations but also do my own creative design with the actor's input to bring the visual feast off the page and onto the screen. It was all an exciting process for me. I didn't feel it was necessary to go full head of dark dreads as in some illustrations, or short chopped hair as in others. So instead I did a mix of dreaded hair, textures, with matted hair all pre-dressed on a detachable piece that I could work into and also use the actor's hair.

Different colors and textures pay homage to Lobo's existence as a traveling bounty hunter in an interstellar world. Intertwined in the hair are metal skulls, bones, stones, jewelry and leathers which entertains the idea of Lobo's bounty hunter job perks! Taking what he wants, when he wants. The wildness and length of the hair along with the ponytail add to his egotistical vain side which we love about the character. There were scenes where the actor would play Lobo flicking his hair in the scene with characters. The bigger the better with a character like Lobo!

SYFY: Can you describe the development process that goes into creating the hairstyles for Krypton characters?
SR: The development process is very collaborative. I fist talk with creators and directors with the makeup designer and often the costume designer as to what the show should look like overall. Then, if there are any specific or mandatory character requests. I then read the script again. By doing this I start to imagine each character in my head.

Then, I look at set drawings, costume designs and textures. From there, I get clearer ideas and options in my head in prep for when I meet the actors. Before I meet each actor playing the character, I like to have a mood board ready to present to the them, as I find that visuals are always best when collaborating and presenting ideas. Sometimes it's only after seeing them in person that new creative ideas for their character come to me. I then discuss what they see for their character's hair. How they will play them? This often leads to new ideas and development on previous ideas. Then comes, the practical hair tests and makeup tests on the actor. This process can take sometimes 2-6 tests over a period of 5-10 days. This is due to time consuming hair color changes, wig fittings, alterations and making hairpieces.  When everything is ready for the different looks, the final tests with costume and makeup are photographed or filmed. The final look is approved when the actor producers, director and creator are satisfied to shoot it and lock it down on screen. The character is ready!

SYFY: On average, how long does it take to create each character's look?
SR: On average, the hair looks on Krypton took 1 hour. Some of the more complex looks took 1.5 to 2 hours.

SYFY: How long have you been working as a hair stylist? What inspired you to pursue your current profession?

SR:  I have been hairdressing for 21 years and have been working in the industry for 16 years. My love of hair started very young. My mother, grandmother and uncle were hairdressers. I knew I wanted to work in TV and film from 5 years old. I would watch and study hair on all movies including old Hollywood film from the 1930's onward. It makes me laugh to remember I used to take a hair kit into school and do all my friend's hair at lunch breaks, they would form a line and I loved it so much!  So as soon as I was able to work, I started hairdressing and learning the trade. Once I finished my apprenticeship, I started training in the industry. I also went to art college and loved being artistic. I studied makeup, film, sculpting, life drawing, art history, metal craft and design. Which I find is so important in hairstyling for tv and film.

SYFY: What's the best part about working on a show like Krypton?
SR: The best thing about working on a show like Krypton is the melting pot of DC characters. To work in a SYFY world and help bring comic book characters to life is so creatively satisfying. To go to work everyday with talented artists and bring ideas and visions to life on screen with an amazing cast and crew is a dream job.

SYFY: If you could rock any characters look in real life who would it be? 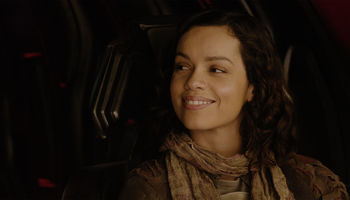