Take an extended look at Lobo, one of Krypton’s newest and most eccentric villains in Season 2, as he’s seen for the first time onscreen in his own behind-the-scenes preview.

When it comes to bringing the galaxy’s greatest bounty hunter to life, actor Emmett J. Scanlan told SYFY he was in makeup for four hours at a time (three, once they got the hang of it) when shooting Season 2. “But a good 95% of that is shadowing,” the actor quipped. “I’m kidding. It’s 85%.” And, no Scanlan doesn’t have naturally red eyes. “The team we had in hair, costume, and make-up are some of the greatest talents I’ve ever worked with,” the actor shared, “but when I put those eyes in, it brings it all together. The fruits of their insanely talented labor brings the fruitcake of my character to life... when those eyes go in I’m f---ing intolerable.”

In Season 2 of Krypton, we’re back to a changed Kandor, locked in a battle over its freedom and its future. General Dru-Zod (Colin Salmon) is now in control. He’s on a ruthless mission to rebuild Krypton according to his ideals and to secure its future by conquering the universe. Faced with a bleak outlook, our hero, Seg-El (Cameron Cuffe), attempts to unite a dispersed group of resistors in an effort to defeat Zod and restore hope to their beloved planet. Their chance at redemption is threatened however, by their opposing tactics, shifting alliances, and conflicting moral boundaries -- forcing each of them to individually determine how far they’re willing to go in pursuit of a better tomorrow. 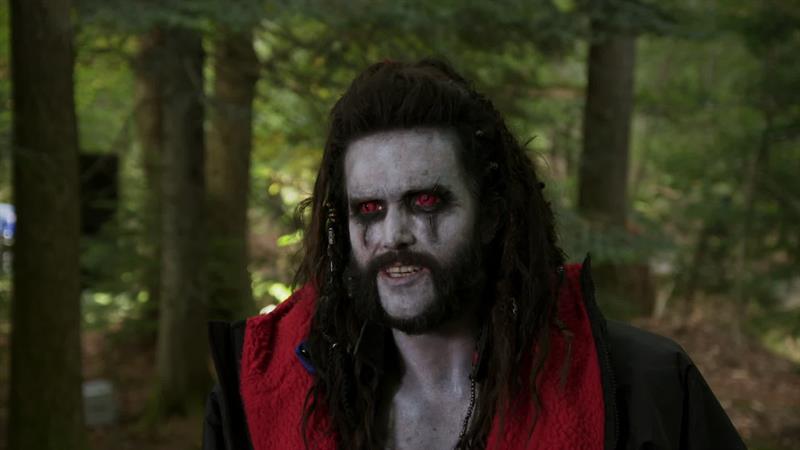 “Krypton is a balls-out show. It’s a risk-taking show. It’s a ‘never been done before’ show” Scanlan told SYFY. “It’s beautiful to watch and humbling to be part of. Expect more. Much more… Being the only person to ever bring this guy to life, regardless of the outcome, means I will be the best the world has ever seen. Although, based on that logic, also the worst.”

Clearly Krypton found an actor with a big personality for the role! SYFY.com checked with Scanlan on which of Lobo’s nicknames is his favorite. “Gotta be the Main Man,” he said, adding, “although Captain Footlong is nice,” which of course is not one of Lobo’s nicknames, but nice try anyway, Emmett! We also asked the actor to describe his character in three words. “I’ll give you four: OFF HIS FRAGGING ROCKER.”

We will see for ourselves when Krypton returns for Season 2 on Wednesday, June 12 at 10/9c!