An A to Z Guide of Syfy's Most Monstrous Original Movies

With names like Grizzly Rage and Jersey Shore Shark Attack, it was only a matter of time before we made it offical with a list. In celebration of Halloween 2015, we present to you, an A to Z guide of some of Syfy's most original monster - and a few non monster - movies.

A is for Abominable (April 2006): A man escapes the throes of  Big Foot, survives and then goes BACK into the woods to find Big Foot, because...?

B is for Boa vs. Python (May 2004): The FBI comes up with the brilliant idea to save the United States from the attacks of a *80-foot* python, by pitting it against a *70-foot* bioengineered boa constrictor.


C is for Copper Head (June 2008): A small town in the Wild West is attacked by poisonous snakes-- not bandits.


D is for Dinoshark (March 2010): A baby dinoshark grows up to be an adult dinoshark that kills tourists and locals, near Puerto Vallarta, Mexico.


E is for Encrypt (June 2003): It's 2068 and apparently Google, Apple Inc., and Siri have been de-throned by the following, respectively: a deadly computer defense system called Encrypt, a killer robot named Rook and a human-like holographic security chief, Dana.


G is for Grizzly Rage (September 2007): Four teens - it's always youngsters, right? -  become a lunchtime snack for one relentless grizzly.


H is for The Hive  (February 2008): Who would win in a fight? A group of humans or a colony of ants? Hint: put your money on the voracious insects that are eating the woman in the picture.


I is for Ice Spiders (June 2007): A ski team gets the training of their lives when they have to skate away from giant, murderous ice spiders who have an appetite for flesh.


J is for Jersey Shore Shark Attack (June 2012): When a man goes missing, The Complication, Nookie and friends - comprised of other aptly named puns - team up with the Preppies to hunt down a vicious shark.


K is for Kaw (Aprl 2007): A group of ravens, driven by a DARK FORCE, start attacking people's faces and other body parts because that's what evil ravens working for a DARK FORCE do.


L is for Larva (January 2005): Vegetarians are safe! Flesh eating parasites found in a local town's beef start eating people's faces (and the rest of their bodies) from the inside out.

N is for Night of the Wild (October 2015): The Real Housewives of New York's Jill Zarin got her face eaten off by her dog, and that's all you need to know. 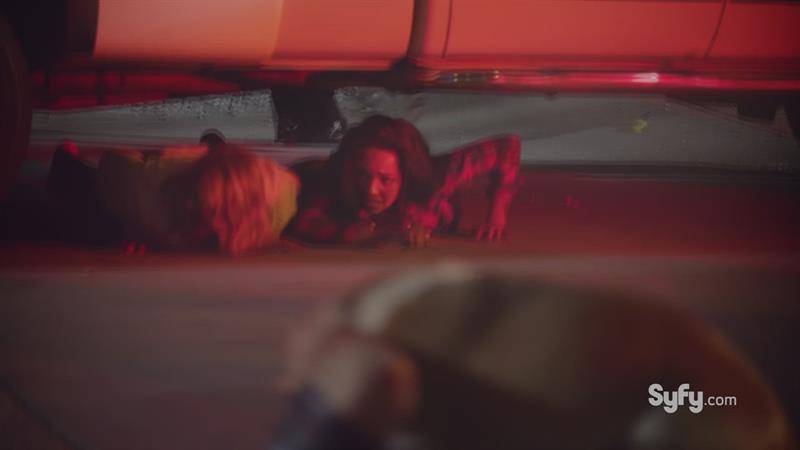 O is for Ogre (March 2008): This ain't your childhood Shrek. This Ogre is less "Marry, me Fiona!" and more "Hulk. Smash!" Also, this ogre is trapped ruling over a town that's been stuck in time since the 1800s - missing out on both of The Avengers movies. We'd be pissed, too.


P is for Painkiller Jane (April 2007): Syfy is no one trick pony. In addition to showing movies about giant mutated monsters, we also air films that are more rooted in reality. Like this one, about genetically enhanced individuals being hunted by a covert government agency.


Q is for QUESTION: How have we managed to not make a Syfy Original movie that starts with the letter Q yet?


R is for Red: Werewolf Hunter (October 2010): Felicia Day stars as Red, a girl that brings her fiancé - who is later bitten by a werewolf- home to meet her family of werewolf hunters.


S is for Sharkando (July 2013), Sharknado 2 (July 2014), Sharknado 3 (July 2015)- It's raining sharknados and cameos, that include: Ian Ziering, Tara Reid, Vivica A. Fox and Mark McGrath -just to name a few. Visit the Sharknado 3 site to watch memorable moments from the movies, see backstage interviews and you can also download the Go Shark Yourself app. Annnnd, you can bet your ass there's going to be a Sharknado 4. Keep an eye out on Syfy.com in 2016 for more details!


T is for Triassic Attack (November 2010): Three dinosaur fossils come to life and start tearing shit up in a small town.


U is for The Utilizer (December 1996): A machine that grants wishes? Of course, somebody gets greedy and the consequences are deadly.


V is for Vipers (September 2008)- A scientist's vipers escape into the woods where they do more than bite. Basically, this is our ominous way of saying that the snakes kill people.


X is for Xtro 3: Watch the Skies (June 2009): Marines on a deserted island encounter aliens, naturally, and the aliens aren't interested in making smores and telling stories around a campfire.


Y is for Yeti: Curse of the Snow Demon (November 2008): You know the drill, a group of people, this time survivors of a plane crash, try not to become the dinner of a lurking mountain monster.


Z is for Zombie Apocalypse (October 2011): A small group of zombie plague survivors, including Ving Rhames, fight their way across the country in search of refuge.