You'll definitely want to tune in for The Banana Splits Movie, and here's why

What if Dr. Ian Malcolm was wrong? What if, when the animatronic attraction known as The Pirates of the Caribbean breaks down, the pirates actually do eat the tourists?

Jeff Goldblum delivers that line with such conviction in Jurassic Park, and no one questions the wisdom of thinking that they are safe from robotic creations invented for play and amusement. Everyone should think again, because here comes The Banana Splits Movie.

The new movie airing on SYFY takes the characters and goofiness from the original 1968 show, The Banana Splits Adventure Hour, and, well, turns everything on its robotic, animal head. While attending a taping of the show, a lucky (but not really) group of fans gets to go backstage — and things...go south. There is foul and murderous programming going on behind the scenes of this program.

It’s one part Jurassic Park, one part Meet the Feebles, and it’s all served on a Willy Wonka and the Chocolate Factory plate. None of the characters that go on the backstage tour will come out the same — some don’t come out again at all.

Never meet your heroes, we guess?

The “Banana Splits” themselves -- giant, robotic animal creatures that look like they’re right out of a rundown Chuck E. Cheese -- are highly spooky before anything even starts to go wrong. They’re goofy, they spout catchphrases, and that all just makes it worse. It’s not too much of a spoiler to say that they soon begin to malfunction (or function properly, depending on who you ask), and then they turn into something quite dangerous.

That’s when the gore comes a-calling, just in time for Halloween! Why should you be excited to tune in for this movie? It’s silly and it’s goofy, but it can also turn on a dime and splatter you with blood and brains when you least expect it to. It’s the perfect October movie to watch with your favorite group of bloodthirsty friends.

There’s plenty of genre subversion to be had — this could easily have been your standard “robotic furries kill a studio full of people one by one slasher movie”, but it doesn’t play by those rules. Also, that’s not a standard movie trope. The Banana Splits, and their skull-smashing movie, do not play by any rules.

Still, for a movie like this to work, you’ve got to care about someone. If everyone in the movie is terrible, and you’re only rooting for the bad (or misguided) antagonists, then the movie will be fun, but not much more.

That’s why it’s great that this movie has it’s very own Charlie Bucket, in the form of Harley (Finlay Wojtak-Hissong). He loves nothing more than the Banana Splits, and he believes in their magic. He’s not supposed to be able to go on the backstage tour, but he has a great older brother who makes it happen. Along with their mother, Beth (Dani Kind), they prove to be a family unit that you care about, and they give the movie some stakes.

Other than them, you’ve got a stagedad and his daughter, a pair of Instagram “celebrities,” a producer, and a page. Some of these characters are seriously just begging to be killed, while others have more noble intentions. We’ll leave it to you to decide who you want to see live, and who you wouldn’t mind seeing the Banana Splits chop in half.

We’re already talked about the gore, but let’s talk about it some more. It is quite gratuitous, and that seems to be the point. Any cutesy vibes that you’re getting from the Splits themselves will be laid to waste right after the first death, which grimly sets the mood for the murders to come. The movie has a lot (seriously, a lot) of fun with the foreboding tone of these creations before anything goes wrong, but after that it just goes wild. The volume of gore is appropriate to the tone — that tone being completely over the top.

Honestly, would you want anything other than “over the top” from a movie with a title like this? After a while, a lot of the fun comes from wondering how far this thing is going to go, and how much further the filmmakers are going to push it. Just when you think they’ve gone as far as they possibly can, nope! Double-cross city.

All of that said, is it scary?

Yes, yes it is. No matter how silly the premise is, and how goofy the giant furries look, there is something very off-putting at work here that could possibly strike a shivering nerve in your soul. The Terminator could walk around in a giant dog suit, but he’d still be the Terminator. He’d still be lethal, and he’s still going to murder you. He won’t do it with a goofy giggle, humming a kid’s song, though. Which is worse, we ask you? For us, it’s the latter.

Gather your friends, and get ready for a rough, hilarious, and scary ride with The Banana Splits Movie, which comes to SYFY on October 12th. You may be safe from animatronic pirates, but we’re making no promises about the robotic elephant puppet in the bow tie.

The Banana Splits Movie airs this Saturday on SYFY at 9/8c! Watch the offical trailer below. 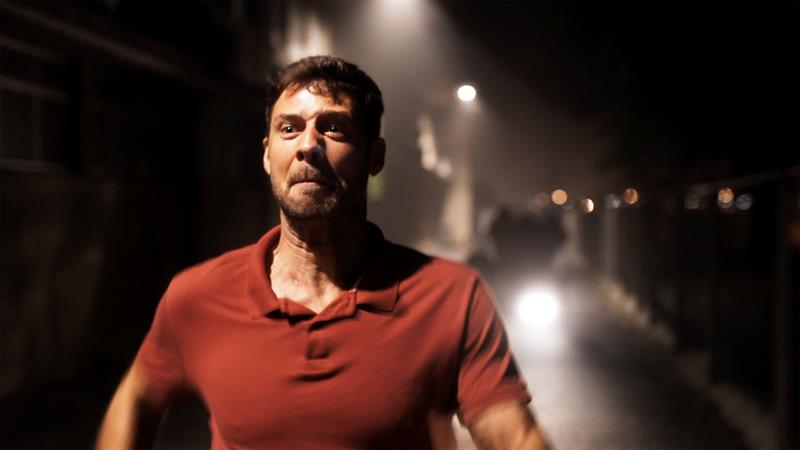 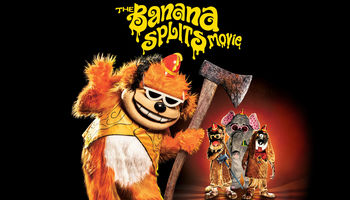 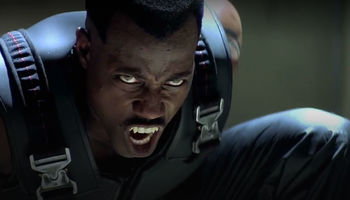 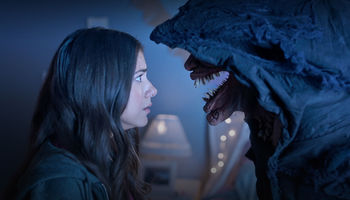