Prom is a magical moment in the life of a teenager. But prom can also be a night of disappointment, a night when twisted teens take jokes too far. Sometimes the prom queen even loses her head—or maybe even shows up undead.

For the 21st of our 31 specials for the 31 days of Halloween, we revisit those moments when the prom court takes a turn for the gruesome with our picks for movie's most nightmarish prom nights.

Check back tomorrow for the eeriest movie moments of possession. 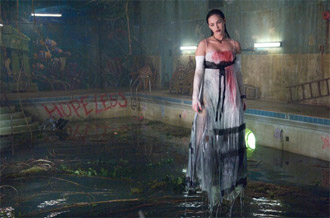 Chip is a hot-blooded American teen. Like most of the guys in Devil's Kettle, he's having a tough time resisting Jennifer's devilish charms. Who wouldn't want to skip the foreplay of prom entirely and get down to business with a girl as smokin' as Jennifer (even if she has been looking peaked as of late)? Forget the fact that Jennifer is his girlfriend's best friend. Or that Jennifer's idea of a romantic prom night includes a dip in an overgrown and putrid abandoned pool. But Chip might have wanted to reconsider his cheating ways around the time that Jennifer tried to eat him alive.

Texas Chainsaw Massacre: The Next Generation 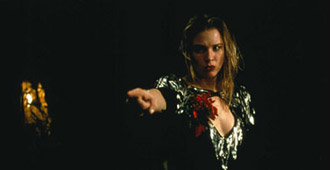 Everyone knows that kids who leave prom early are looking for trouble. Typically that includes some Budweiser in the woods, or maybe a little skinny dipping. It doesn't usually involve a handsome hick with an animatronic leg and a taste for blood (Matthew McConaughey) and his chainsaw-wielding pal, Leatherface, who sports a suit made of human skin. Though Leatherface is clearly in need of a new prom-night ensemble, innocent Jenny (Renee Zellweger) manages to escape all manner of torture, resplendent in a prom dress with shoulder pads fit for a linebacker.

Night of the Creeps 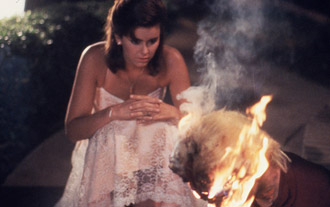 It's getting late, and the sorority girls in Night of the Creeps can't wait for the bus filled with their hot prom dates to arrive. They might have been a little less enthusiastic had they known that they would be the ones setting their dance partners on fire. Literally. It seems that a fire-fearin' alien parasite infiltrated the already addled frat boys' brains en route to pick up their girls and turned them into zombies. But the brothers aren't a total lost cause; even after being zombified they manage to show up dressed to the nines. 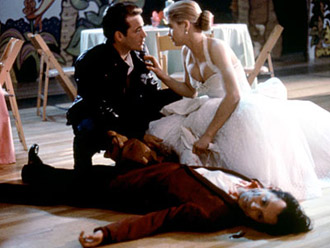 Buffy Summers is a valley girl with a vicious side. Trading in her pom-poms for a sharpened stake, she knows how to take even the most dashing vampire down a few notches. She charms, kicks and impales multiple undead dance partners who are threatening to ruin prom. Good thing she is wearing her dress Dr. Martens. 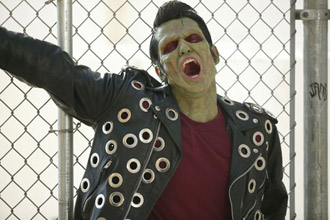 What happens when Grease and Nuke 'Em High get a little too frisky in the back seat? You get the musical-turned-horror-movie Zombie Prom. Lovelorn gearhead Johnny ends his tortured soul in a nuclear power plant crash but finds that the afterlife doesn't mend a broken heart. Still hell-bent on getting back together with his flesh-and-blood sweetie, the cadaverous Casanova returns to the land of the living and pledges to take her to prom even if it kills him ... again. 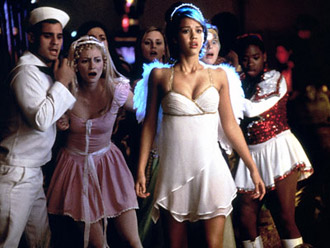 Ever get stuck with a date that's all hands? What about just one hand with a sinister agenda that preys on teenagers necking in a car at the high school parking lot? In this twisted tale, Anton's possessed idle hand does more than play. It goes to the prom, kidnaps his date and tries to sacrifice her to the devil. High five!

Dance of the Dead 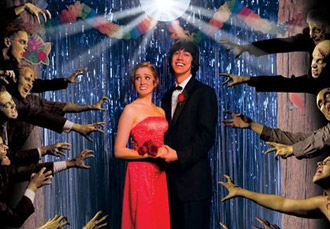 This is the one time, in all of high school history, that the geeks, weirdos and losers end up ruling the prom. While all the other students are getting busy on the dance floor, the kids who can't get a date are the only ones who can stop the newly awakened undead. For once, being in the sci-fi club means you're going to get the girls you've been dreaming about. That is, if you can survive roaming zombie parts, your high school bully and taking orders from your highly aggressive gym coach. Even the punk band burnouts have their 15 minutes of fame. It turns out zombies love to rock, and with the help of their trusty axes these rockers give new meaning to the term "head banging." 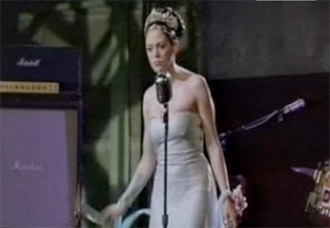 It's a classic scene: the newly crowned, teary-eyed prom queen walks onstage to accept her place as head of the court and make her speech. The twist here is that she isn't handed her flowers, she's pummeled with them. As she is smothered with her own bouquet by the once worshipful student body, the girl she's wronged looks on with smug satisfaction. I'm fairly certain this has happened, for real, at more than one prom. I'm not sure where, but I suspect New Jersey. 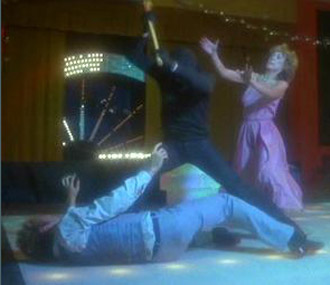 This 1980 slasher classic begs the question: What's scarier? A sex offender come back to seek his gruesome revenge on prom night or Jamie Lee Curtis committing disco? This killer should have thought twice before messing with a prom queen who has the Bee Gees on her side. Next time he'll be sure to turn off the strobe light. 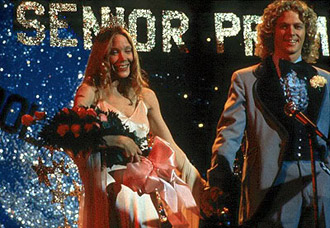 Poor, misunderstood Carrie. Not only does she have to deal with a mom who is a bit of a zealot, but she also has the small problem of a telekinetic gift that she can't control. But for one night it seems that everything in her life is going perfectly ... until that nasty trick with a bucket of blood. In true teenage-girl form, Carrie's public disgracing brings on the drama—big time: Inanimate objects attack, and people are trampled, electrocuted and set on fire. Lesson learned: You just don't mess with a girl's prom dress.