Insidious infants, tricky toddlers and preternatural preteens—chilling children in horror movies are as relished as that one full-sized candy bar you'll get in your trick-or-treat bag. That's why we've made them the ninth of our 31 specials for the 31 days of Halloween. (Proceed with caution: Like the rotten razor-apple, spoilers abound.)

And come back tomorrow at noon for the best and worst Stephen King horror films. 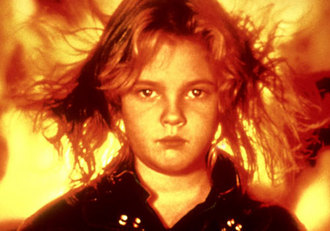 Before Drew Barrymore was a bona-fide hottie, she was just hot as the pyromaniac telekinetic kiddie in Stephen King's Firestarter. Charlie was almost certainly on Smokey the Bear's hit list, but in the film she's welcomed with open arms by the Shop, a secret government agency with an agenda and plenty of flame-retardant black suits. Charlie doesn't intend on evil, but when pushed her temper flares and people fry. 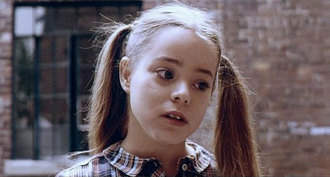 Alice (Paula Sheppard) is not unlike most older siblings in that she delights in terrorizing her little sister. Alice is cruelly inventive in her scare tactics, until one day she takes things too far and winds up killing Karen (Brooke Shields). In order to cover her crime, the seemingly sweet and innocent young choir girl systematically eliminates anyone who even so much as looks at her sideways (the obese ailurophile-slash-pedophile totally had it coming, though).

Rhoda in The Bad Seed 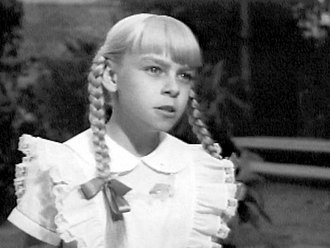 Ten-year-old ice princess Rhoda (Patty McCormack) is pretty as a picture and polite as you please, but behind the blond, pigtailed facade lurks a sinister and slippery sociopath. Her long-suffering mother can barely keep up with her precocious offspring as the young'un skips from one crime to another. Rhoda isn't sugar and spice and everything nice, but it sure is a delight to see her strangle and slice. 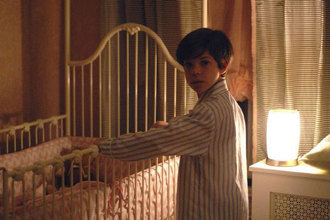 There's a new baby in the house, and this makes the one-time only child Joshua (Jacob Kogan) very tense. Not only is the little intruder beyond demanding (constantly colicky, crying, stealing mom and dad's attention at every turn), but everyone seems to love her more than they love him. From the guinea pig to grandma, the traitors have gotta go. Once Joshua has eliminated nearly everyone in his orbit, it's time to find someone who will be completely devoted to him ... whether they like it or not.

Tomas in The Orphanage 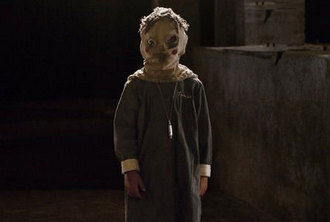 Cherished son Simon (Roger Príncep) disappears shortly after his intensely devoted mother has a terrifying encounter with a mysterious, menacing masked child called Tomas (Óscar Casas). Tomas, once Simon's invisible friend, has now become an all-too-visible fiend. The specter's facial camouflage is clumsily crafted from a swath of filthy burlap, adorned with button eyes and a painted red smile that's smudged into a frown with what is presumably dirt and drool. It's one of the scariest—and saddest—disguises ever captured on film.

Samara in The Ring 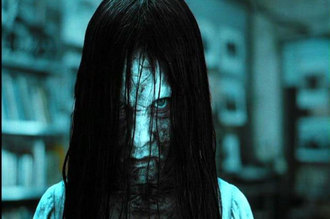 Stock up on the bottled water and make sure you're up to date on all your movie rental returns before you take a soak with Samara (Daveigh Chase), a grudge-holding ghost girl who doesn't wish anyone well. After her drowning death, which was cosmically entangled in the tape of a videocassette, spitting-mad Samara goes on a spree to make sure not a single scene from her murder is skipped. When the accursed film winds up in the hands of a reporter with a budding cinephile for a son, all heck (PG-13 style) breaks loose. 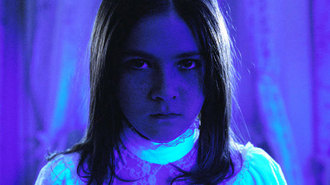 There is something wrong with Esther (Isabelle Fuhrman), but everything is just right in this chilling, over-the-top '70s-style thriller with a kinky twist. Polite, bright and ladylike young Esther is an orphan, but even Angelina Jolie wouldn't start the paperwork on this abrasive adolescent. Smart-mouthed and handy with the engineering of extreme evildoing, screaming Esther is one child who should be seen and heard. 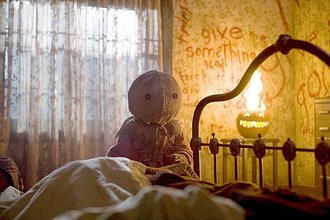 A diminutive creature, slight and about the height of a 6-year-old child, but with a great, rounded, pumpkin-shaped head that's hidden with a baleful-yet-innocent-looking burlap mask, Sam (Quinn Lord) goes out every Halloween, armed with candy. Yes, armed ... to harm! If you've never seen anyone brutally stabbed with a half-eaten lollipop, that is reason alone to watch Trick 'r Treat.

Regan in The Exorcist 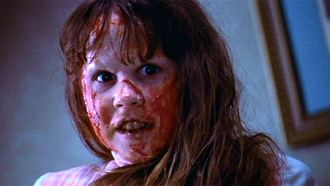 Regan (Linda Blair) is just your typical, run-of-the-mill little girl who loves horseback riding, drawing, reading, playing with Ouija boards and defiling herself with crucifixes while horrified clergymen look on. Oh, and did I mention she's possessed by a demon named Pazuzu? With a name like that, I'll bet Pazuzu was teased a lot during roll call at Satan school. That might explain some of his issues.

Damien in The Omen 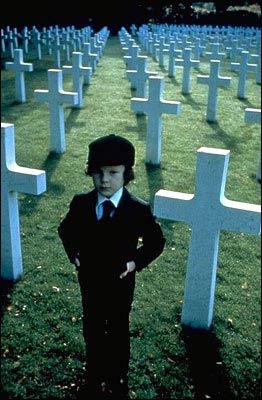 Regan is small peas compared to Damien (Harvey Stephens), who is the successor to Satan himself. Like the cunning cuckoo bird, the devil places his "egg" into another nest and watches as mere mortals raise his sinister son. When Damien, marked with a fashionable 666 tatt, reaches his sixth birthday on June 6, 1976, he makes sure his party is one the neighborhood kids will never forget. From there on, the wicked spawn is nothing but trouble as he sets up a chain reaction of death and destruction.