Sci-fi TV is often filled with grim futures, grim realities and grim alternate realities. But luckily, some serious shows have also had some extremely funny episodes to relieve all of that dramatic tension. Because even grim filmmakers just need a good laugh.

Here is a look at 10 funny episodes nestled within sci-fi dramas.

With his goofy likability and acknowledged role as a Zeppo, Xander makes for good comedy, no matter how much "field time" he's clocked. After Cordelia breaks up with Xander on Valentine's Day, Xander gets his witchy friend Amy to cast a spell to make Cordelia fall madly in love with him. Of course, it backfires spectacularly. Xander rapidly finds himself the object of desire of every woman—alive or dead—in Sunnydale. And they will stop at nothing to get their hands on him.

Angel is a vampire with a soul, and he stoically fights whatever demonic scourge comes his way. The watchword here is "stoic." Angel was famed for his serious, even forbidding, demeanor. So when he came afoul of a plot to steal the life forces of children, the show reached the apex of absurdity when Angel was turned into a Muppet-style version of himself. We howled with laughter at his removable nose, his bouncy walk and the way the other characters reacted to his adorable felt body. And just when you think the episode couldn't get any funnier, puppet-Angel goes through, um, some other transformations. Brilliant.

X-Files is famous for its creepy alien conspiracy saga, but when it does funny, it elevates humor into high art. Take "Bad Blood." In this episode, FBI agents Scully and Mulder try to smoke out some small-town vampires. But this tale is in the telling: We view two versions of the story, one from each of our heroes. In Scully's version, Mulder is manic and insensitive, and Scully is put-upon; in Mulder's version, Scully is a whiner, and Mulder is long-suffering. Because this is an X-Files episode, we never get The Truth. But we do get Scully's craving for pizza.

Think the X-Files only gets one episode? Hells no. See also "X-COPS," filmed in the style of the television show COPS. And no viewing of X-Files humor is complete without "Jose Chung's From Outer Space." You're welcome.

Xena, Warrior Princess: A Day in the Life 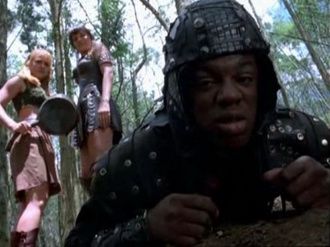 When the characters in this epic fantasy aren't staving off enemies, fighting evil, or singing, they're ... what, exactly? The episode "A Day in the Life" examines a supposedly normal day for Xena and Gabrielle, one where they're staving off enemies—only this time, the enemies are each other. It starts with Gabrielle annoyed with Xena for destroying their one good pan and culminates with Gabrielle annoyed with Xena for appeasing her. In between, Xena uses Gabrielle's manuscript as toilet paper and Gabrielle tries to kill Xena multiple times. But the best moments are the ones that cater to the show's lesbian fanbase, such as when Xena and Gabrielle wind up naked in a bath together. The shock of wondering if the producers were deliberately toying with the audience was enough to make fans laugh out loud.

(We weren't able to find an embeddable clip from this episode, so you'll have to click here to get a taste)

Star Trek: The Trouble With Tribbles

Capt. Kirk and his crew have been sent to a Deep Space Station K-7 to guard a supply of quadrotriticale (poisoned by Klingon spy Arne Darvin). Enter Cyrano Jones, interstellar con man, peddling his wares: tribbles. These adorable aliens seem to have no eyes, limbs or mouths, yet they coo soothingly (unless you're a Klingon) and breed rapidly. They also have a fondness for quadrotriticale. You think "The Trouble With Tribbles" is about the potential for planetwide starvation or perhaps intergalactic tensions with the Klingons? Nope. The whole episode was merely an excuse to lob balls of fluff at Capt. Kirk's head.

This clever episode involves time travel, back to the events of "The Trouble With Tribbles." Arne Darvin, trying to rectify his past mistakes, sends himself, Capt. Sisko, Dax, several members of his crew and the cloaked ship Defiant back to K-7. As Sisko and the other crewmembers try to find Darvin, Darvin plants a bomb in one of the 1,771,561 tribbles on the station. Sisko eventually saves the day ... and better yet, we learn exactly who was lobbing the tribbles at Kirk. This DS9 episode matches both the look and feel of classic Star Trek exactly, and the action of the Deep Space Nine episode fits the original series seamlessly. It isn't just funny. It's meta-funny.

To relieve themselves of the boredom of being on the Voyager, Harry and Tom use the holodeck to run a Flash Gordon-like simulation, complete with a ridiculously funny robot, awesome-looking ray guns, a blonde scream queen and a villain that out-Mings Ming the Merciless. Unfortunately, this happens at the time when the crew encounters photonic-based life forms, who confuse the holodeck with reality. To save them, Capt. Janeway has to take on the role of Arachnia, queen of the Spider People. Janeway, as well as actress Kate Mulgrew, plays the role of menacing monarch to hilarious perfection.

At the beginning of this episode, John Crichton, while trying to appease the rage of his pal D'Argo, winds up in a coma. But Crichton's head isn't like the others: Thanks to his enemy Scorpius, it contains a neural clone of Scorpius himself. The fake Scorpius (Harvey) tells Crichton the best reason to live is revenge upon D'Argo. Crichton's response? His mind turns to Saturday-morning cartoons and their sound effects, and he takes Scorpius and D'Argo along for the animated ride. Plus, he gives his crush, Aeryn, the full-on Jessica Rabbit treatment. We could expect this usually dark show to be funny--after all, two main characters are Muppets—but we didn't know it could be Looney.

Stargate had already spoofed itself once before, in an episode called "Wormhole X-Treme!", about a TV show with intimate knowledge of the top-secret Stargate program. For its 200th episode, the show took that spoof even further: Not only did Stargate parody itself, it also poked fun at The Wizard of Oz, Star Trek, the "supermarionation" style of Thunderbirds and Farscape (which also happened to star two of Stargate's main characters). Plot? What plot? After getting a fantasy sequence where mainstays Samantha Carter and Jack O'Neill marry, who cares about something as trivial as plot?

We recommend this episode with a lot of caveats, because, as with the rest of Babylon 5, it makes more sense if you've seen the entire series. But if you have, you'd recall that G'Kar and Londo are diplomats from enemy planets. If G'Kar kills Londo—and he has every reason to want to—thousands of his people will die, including his family. With all its tension, "Convictions" is not played for laughs. But one scene is funny enough to "elevate" this episode to this list: G'Kar and Londo find themselves trapped in an elevator together. G'Kar realizes that he doesn't need to kill Londo ... he just has to wait for Londo to die. After months of tension between the two, Londo's pleas for help and G'Kar's response is a shining example of situational humor, as well as the plotting that made Babylon 5 great.