Tony Stark may be a superhero, but he's more than just a superhero. In addition to operating his personal weapon of mass destruction while drunk—which is not the mere lapse of judgment it appeared to be in Iron Man 2, but a frequent occasion documented by many, many comics—he is also infamous for spearheading a government crackdown of superheroes that led to many being imprisoned without trial, a Civil War fought in protest, and the unfortunate rise to power of a murderous megalomaniac white man who styled his hair in cornrows.

But he is not the only "hero" whose actions have been far from heroic. Check out the following examples.

Note: These do not include crimes committed under duress, or those conducted under evil influences. 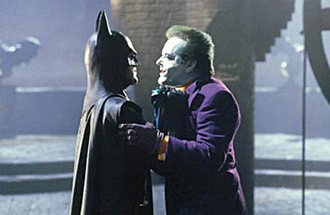 Forget the scene where he blows up the poison gas factory and thus, to anybody capable of putting two and two together, subjects Gotham to the worst chemical disaster since Bhopal.

Shortly after that, in what may be the least intrepid and least effective act ever committed by a so-called superhero, the armored man in the state-of-the-art flying machine strafes the Joker's gang from the air, perforating a number of them but completely failing to hit the main clown himself. The Joker then pulls an absurdly long-barreled gun out of his pants and shoots the Dark Knight out of the sky on his very first attempt.

Aside from the Freudian implication that Batman's impotent and the Joker is not, the only reasonable conclusion to draw from this scene is that Bruce Wayne is just a billionaire who could afford to buy himself "all those wonderful toys" but cannot be bothered to learn how to use them.

The Adventures of Superman: "The Stolen Costume" (1952) 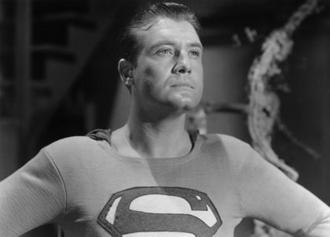 When a petty criminal on the run from police takes cover in Clark Kent's apartment, he finds the mild-mannered reporter's Superman suit in a hidden compartment in the back of the closet. The show takes special care to establish why Clark isn't wearing the red-and-blue long johns under his street clothes that day, so that's all well and good; what's not is how Superman deals with the pair of low-level criminals who ultimately get their hands on it and figure out that Superman and Clark are one and the same.

To save his secret identity from these would-be blackmailers, he flies them to a remote, frozen mountaintop and abandons them there, assuring them he'll bring food on a regular basis until he figures out what to do with them. The terrified crooks promptly try to climb down the sheer cliff by themselves and fall to their deaths.

And how does the man with powers of a God react to this? With a grin of relief and a wink at the camera. What a nice guy.

Unheroic Act: Superman Carries a Grudge Once He's on Top 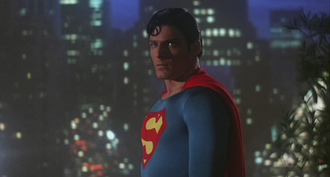 There's no getting around this: Superman is a guy with nigh-infinite strength who nevertheless punches people in the face on a regular basis. But most of the people he punches are active threats to life and limb at the time.

General Zod was a bully and a world-conquering despot, but once he was exposed to the red-sun radiation his powers were gone; even if the moment made audiences cheer, it was still awfully bad form for Superman to demonstrate his victory by first breaking every bone in Zod's hand and then then tossing him into an icy pit where, we're led to believe, he would soon die of cold, or hunger, or the injuries suffered in the fall. Moreover, Clark then makes a special trip back to the diner where his temporarily powerless self lost a fight with a bully, to pick another fight with that bully and beat the living crap out him.

The guy deserved it—and audiences cheered again—but you're Superman, dude. You're supposed to be better than that.

Unheroic Act: Snake Plissken Dooms Us All for the Sake of a Cheap Joke 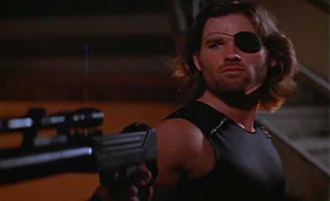 Granted, he's had a rough day. Granted, he's been forced on a mission he never wanted; granted, he's just had a walk through hell; granted, the president whose life he just saved is at best an empty suit. Also granted, he never pretended to be a hero.

But he was also told that the cassette tape he needed to pull from the prison that's been made of Manhattan Island is the last, best hope to avoid a catastrophe. Just because he's pissed off, he replaces it with Cabbie's cassette of swing music ... and is last seen striding away from the president's gross humiliation, destroying the tape and thus dooming us all to armageddon.

This act, dooming any number of people who, unlike the president, never hurt Plissken in any way, may be the most sociopathic deed ever committed by anybody we were ever encouraged to root for ... and it only earned him a sequel.

Unheroic Act: James Bond Takes a Break From Saving the World to Amuse Himself 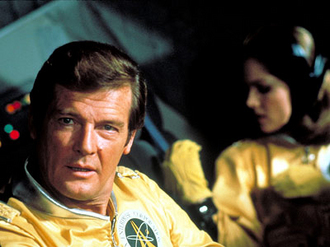 The James Bond of the movies is another guy who doesn't have the greatest reverence for life. He often kills villains in some clever way, sometimes after he's disarmed them and they no longer pose an ongoing threat. Then he makes a quip. Why not? He works hard and deserves to get some enjoyment out of his job (not that his unlimited expense account and all those rapturous women don't already provide him with sufficient recompense).

But taking precious time to kill a villain he has already mortally wounded in some manner more amusing to him, when the world is in imminent danger of annihilation, is a bridge too far. At the end of Moonraker, which takes place aboard a huge orbital station, the entire population of the world is in danger of annihilation from Hugo Drax's nerve gas. Bombs have already been launched toward the atmosphere. Then Bond gets the drop on Drax with a cyanide-tipped dart, rendering him helpless ... and even though there's no time to lose, with millions of lives at stake, he jauntily and unhurriedly leads the dying man into the airlock and ejects him into space.

Gee, it's a good thing this world crisis could make your day more interesting, James.

Unheroic Act: Bruce Willis Holds Up the World for a Break on His Taxes 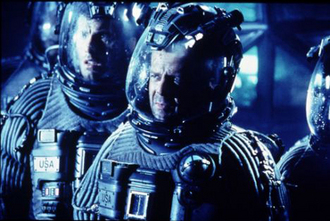 You know all those heroes from old westerns who'd save the schoolmarm from Black Bart and then refuse all reward before they rode off into the sunset? Harry Stamper (Willis) didn't.

Told that the world needed the expertise of his drilling team in order to plant the explosives that would blow in half the asteroid about to impact Earth, Stamper and his team hold out for the goodies ... a series of petty requests that culminates in his stony-faced demand for a permanent total income tax exemption for himself and his crew. Stamper may know that he has the United States government and all of humanity over a barrel, but this is, by precise definition, scumbucket behavior, especially for a guy who claims to love his daughter.

We're glad he blew himself up. 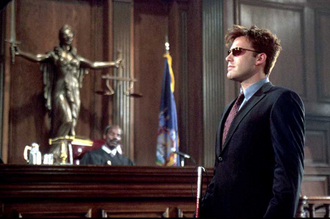 Defense attorney Matt Murdock loses a court case against a rapist. Since he is a defense attorney representing the victim, the only possible explanation is that this is a civil case following a failed criminal prosecution ... or that the screenwriters have no idea how the criminal justice system works.

Despite the considerably lower standard of evidence of civil cases, Murdock loses ... and subsequently stalks the bad guy as Daredevil, driving the perv onto railroad tracks where he is mowed down, screaming, by an oncoming train. Daredevil naturally makes no move to save him. This is supposed to endear him to us.

We cannot help wondering, however, whether he was more concerned by that poor young woman's offended virtue ... or by his own humiliation as an attorney. Frankly, we think it's ego. 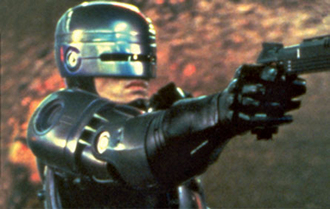 Just about everything in Robocop's M.O., whenever not faced with a foe of equivalent physical abilities, is difficult to reconcile with heroism. Encased in a suit of bulletproof armor and granted enough strength to throw bad guys through the air, he nevertheless carries a gun and perforates as many as possible.

Since the vast majority of them pose no threat to him, even when their intentions are intensely homicidal, his willingness to shoot them amounts to using a howitzer against bad guys who have nothing but pea-shooters. Granted, much of what he does in the first film can be written off as programming, but he regains his soul by the time that film ends, and he returns in the sequels to abuse his physical advantages against every criminal he encounters.

Say what you will about Superman's lapses ...he didn't make a regular habit of kneecapping guys.

Unheroic Act: Neo Slaughters a Lobby Filled With Innocent Security Guards, And Isn't Bothered at All

Yes, the scene where Neo and Trinity storm the lobby of the building where Morpheus is being held captive is indeed one of the coolest set pieces of the film, and yes, they had a reason to be there, and yes, the movie does take pains to establish why sparing innocent bystanders is not possible in this particular world.

Recognizing all that, Neo and Trinity still walk into a lobby filled with guys who are just doing their jobs and slaughter them en masse, in a beautifully choreographed but still murderous ballet of absolute carnage. As much as the film labors to defend the necessity of their actions, it would have been nice if Neo or Trinity or anybody involved showed enough human compassion to at least feel bad about what they had to do, for as long as a single dialogue line.

But no: what they did looked cool, and the movie was just graceless enough to give the impression that it felt cool.

Unheroic Act: V Imprisons and Tortures a Young Girl Who Trusted Him 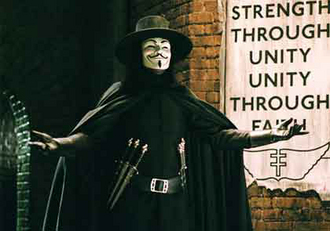 The original graphic novel by Alan Moore and David Lloyd recognized that its masked vigilante, who is known only as V, may be nothing more than a crazed, inhuman sociopathic redeemed only by a time and place that can only benefit from a little anarchy. The Wachowski brothers' movie labors hard to retain this interpretation, but on-screen derring-do is still easy to mistake for actual heroism.

This is nowhere more disturbing than during the sequence where young Evey (Natalie Portman) endures days of imprisonment and torture, believing her captors to be the totalitarian government ... only to emerge from her cell and discover that it was V, playing with her head all along. The best thing you could say about this is that, unlike the other examples of this list, it was placed before us by creators who knew that this was seriously messed up.