The long July 4th holiday weekend kicks off tomorrow, which for many of us means trips to the beach, burgers on the grill and fireworks (only where legal, of course). But it should also mean some time spent remembering those patriots who defended our liberty—both the real ones who fought for our freedoms and those fictional ones who on television and at the movies reminded us what that liberty was all about.

With that in mind, let's take a look back at our 10 favorite sci-fi examples of patriotic film and TV.

The asteroid Apophis isn't likely to hit Earth. But if it did, what could we do?
Armageddon vs. Deep Impact: Which asteroid disaster film wins?

After Kryptonian criminals General Zod, Ursa and Non escaped from the Phantom Zone in 1980's Superman II, the trio traveled to the White House and forced the president to surrender. The Man of Steel was nowhere to be found, as he'd stripped himself of his powers in order to lead a normal life with Lois.

But he eventually rededicated himself to Truth, Justice and the American Way, and in this stirring clip at the film's finale, he restores the American flag to the White House, where he promises us all that "I won't let you down again."

The President rallies the troops in Independence Day

With humanity on the ropes after an alien invasion in Dean Devlin and Roland Emmerich's 1996 film, Bill Pullman gets a chance to offer one of cinema's most rousing speeches.

Portraying a president who'd been a former Persian Gulf War fighter pilot himself, he launches "the largest aerial battle in the history of mankind" and promises that future generations will agree "today we celebrate our independence day."

In the episode "Omega Glory" from the original Star Trek, William Shatner puts his passionate acting style to good use with a speech worthy of his unique delivery. When the U.S.S. Enterprise responds to a distress call, its crew finds warring tribes whose behaviors have evolved to parallel the Cold War that once existed between the U.S. and the Soviet Union.

And how does Kirk bring peace to the Kohms ("Communists") and Yangs ("Yankees")? Why, by reciting the preamble to the U.S. Constitution—which is known on this planet only in a highly distorted form—so that even they may "form a more perfect union."

In the final moments of 1984's Red Dawn, after a Russian invasion is put down in part due to a band of teens gone guerrilla, we are told, "We're free now."

In a voice-over, one of the survivors, Erica (Lea Thompson), shows us a memorial plaque and asks that we remember those who "gave up their lives so that this nation shall not perish from the earth."

Robert Downey Jr., who stars as a Tony Stark updated from his original Marvel Comics Vietnam roots to a more contemporary Afghanistan, has no problem with being called both "the Da Vinci of our time" and the "merchant of death." All that matters to him, as the film begins, is blowing things up real good.

As as he demonstrates his latest weaponry, demolishing a mountain, he announces that "They say the best weapon is one you never have to fire. I prefer the weapon you only need to fire once." Then he delivers the line that ties it all together and gets him on this list: "That's how America does it."

At the funeral service after the battle at Ragnor, Adm. William Adama of the Battlestar Galactica promises to lead the survivors to Earth. "I know where it is!" says Edward James Olmos in one of the many moving speeches he gave on the series. "Earth—the most guarded secret we have. The location was only known by the senior commanders of the fleet, and we dared not share it with the public."

He wasn't being truthful, but that doesn't matter. By leading the assembled mourners in a repetition of "So say we all," he rededicated them to fighting for all we hold dear.

With a corrupt President Clark transforming the Earth Alliance into a dictatorship, it's up to Babylon 5's Cmdr. John Sheridan, portrayed by Bruce Boxleitner, to take a stand.

As with the Battlestar Galactica clip above, while this might not reflect patriotism on behalf of the U.S. alone, Sheridan's declaration of the right of all people to be free certainly belongs here due to its defense of the values on which this nation was founded.

Zoidberg eats an American flag to prove his love of freedom

In the Futurama episode "A Taste of Freedom," RIchard Nixon's head (you'll see) declares it to be Freedom Day, and the lobster-like alien Zoidberg takes that opportunity to celebrate in his own special way—by eating an American flag! "To express oneself by doing a thing," he declares, "is the very essence of Freedom Day!"

We can't find an embeddable version of the clip, but you can check out the scene here. 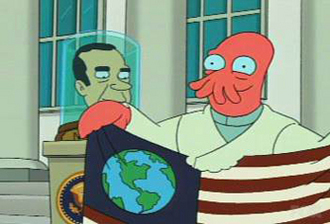 A band of brothers prepares to prevent Armageddon

As a team of 14 astronauts launches a mission to destroy an asteroid on a collision course with Earth, the president tells the world that "I address you tonight not as the president of the United States, not as the leader of the country, but as a citizen of humanity."

And yet—it is the president of the United States speaking, after all. And though we see the entire world listening to his inspiring speech, translated into multiple languages, there are those NASA patches, and the lovely Liv Tyler at first worried and then smiling in front of a massive American flag ...

The pilot to the '70s TV series Wonder Woman began with an old-time newsreel showing Hitler and Mussolini ready to conquer the world, plus footage of Nazi soldiers desecrating an American flag. Witnessing all of this, the narrator exclaims that "the only hope for freedom and democracy is—Wonder Woman!"

As we're introduced to star Lynda Carter in her red, gold and blue outfit, the theme song tells us that she can "stop a bullet cold—make the Axis fold!" And that's exactly what she did, helping to end the Good War. Check out that debut episode here. 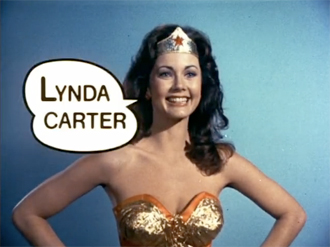 Jericho followed the inhabitants of a small town as they dealt with the aftermath of a nuclear war that might have been set off deliberately as part of a government conspiracy. In "Why We Fight," the final episode of the first season, Jake Green (Skeet Ulrich) finds himself facing a near-certain defeat against those who would invade his town.

With his father dead, Green replies using the same retort issued by Gen. Anthony Clement McAuliffe when given a German surrender ultimatum during the Battle of the Bulge: "Nuts!"