The Goonies isn't a great film, but for those who were kids during the sweaty summer of 1985, The Goonies is a touchstone. It's the promise of the sort of adventures any kid would want to have, and while plenty of movies have aged poorly, 25 years later, The Goonies still holds up.

Here are 10 reasons to give Mikey and the gang a rewatch for the film's anniversary today. It's not the greatest film of all time, but as the song says—the Goonies 'R' Good Enough.

Why The Goonies could never be remade (until now, maybe)
Everything Wrong with the Goonies vid confirms that the movie we all love is terrible 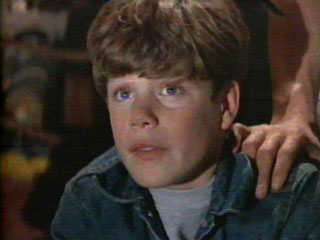 The 1980s were the zenith, or perhaps the nadir, of "sassy" kids in movies and on TV. Hands on hips, dripping with designer whatnot and Day-Glo fashions, with soundbite-friendly comebacks and bad attitudes. Astin's performance is surprisingly thoughtful and deep—given the wackiness of the plot, Astin's understated performance as the stalwart Mikey gave the film a grounding in realism. These same attributes made Astin a wonderful Sam in the Lord of the Rings trilogy two decades later.

The music video—TWO music videos, actually, and it was billed as the first "two-part" video—for the theme to the film is an epic. Cyndi Lauper, most of the cast of the film, various World Wrestling Federation superstars from the era and Steven Spielberg himself appear in this 12-minute tribute to '80s cheese.

Nikolai Volkoff milks a plastic cow for some reason, Andre the Giant appears in a puff of smoke and saves the day in a furry diaper, Cyndi tangles with a giant octopus tentacle, and someone chained Martha Plimpton to a giant cauldron. (Good.) Also, the ladies from the then-unknown Bangles play pirates!

Chunk's ritual humiliation is the sort of thing that sticks with people, and in these days of YouTube and inexpensive nonlinear editing systems, it allows for the creation and promulgation of this horrifying remix:

Surely any student of avant-garde filmmaking will recognize the influence of both Bruce Conner in the assemblage remix—reminiscent of Conner's detourning of the Zapruder film of JFK's assassination in Report—and Kenneth Anger in the sheer! occult! fury! of this piece. It's certainly worthy of a major essay, if not a Ph.D. thesis in cinema studies.

Also, the Truffle Shuffle was referenced on Family Guy. That's a funny show.

And Olivia Munn did the Truffle Shuffle, too!

P.S.: Jeff Cohen, who played Chunk, is now a svelte attorney, but you can probably still get him to do it.

Martin Sheen was not in The Goonies, but one of the best exchanges in the film involves Mouth looking at a silver dollar and declaring that Martin Sheen is on the head of the coin, and Stef calling him an idiot. It's a weird little moment that actually stops the plot and the breakneck pace of the movie to build a little character dynamic. It's cool, and let me be reminded of The Goonies whenever anyone would ask why I didn't like to watch The West Wing. (Answer: I like my fantasy somewhat realistic.)

(While we're not able to embed the scene, you can view a clip of it here.)

Frank Miller's 300 took many liberties with ancient Greek history, but one lapse this Greek can forgive him for is the depiction of Ephialtes: 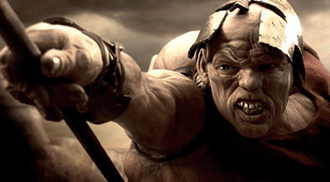 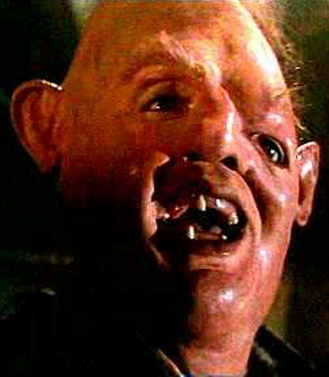 This is not a coincidence, this is not parallel evolution, this is TRIBUTE! HOO-AH!

The 1980s were a backward time—it was nearly impossible for an Asian character to be introduced in an American comedy film without a gong going off in the distance. Jonathan Ke Quan's "Data" is a bit of a step forward. Hell, he's the one who corrects an Anglo character's pronunciation ("Dahta" "Dayta!") and how many times did he save the Goonies with his wacky inventions?

Lots, according to this best-of video:

Later the actor co-starred with fellow '80s kiddie star Scott Grimes in the sitcom Together We Stand. Grimes made a bit of a comeback last month with his turn as Will Scarlet in Robin Hood. Can Ke Quan make a comeback? He's now expert in taekwondo and did some stunt coordination for The One and X-Men. Get him back on the other side of the camera! 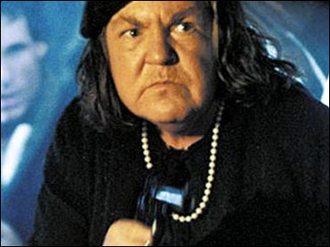 The most frightening woman of the 1980s. Her turn as Mama Fratelli in The Goonies was her last before having part of her jaw removed, which led to the slurred speech that can be heard in Throw Mama From the Train. That's how convincingly scary Ramsey was: She kept getting work after experiencing a setback that would have ended most acting careers.

Richard Donner is one of those filmmakers who'll probably only be rightly appreciated after his death. He's had some clunkers and some works of genius, but he's never phoned it in. The Goonies had all the earmarks of a headache—tons of kids to corral, Steven Spielberg looking over his shoulder, and a pretty ridiculous third act—that would have stymied most directors, but Donner worked hard and made some excellent moves. 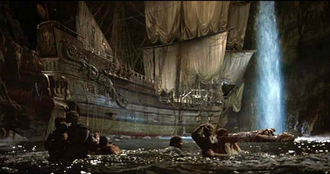 For example, the full-sized pirate ship was kept a secret from the actors who played the Goonies; they saw it only when shooting the scene in which their characters discover the ship, and thus the reaction shots have a powerful authenticity they would have otherwise lacked. And that's why we'll forgive Mr. Donner for Sloth tearing open his shirt to reveal the Superman emblem. (Yes, yes, you directed Superman and thus saved a generation from decades of "campy" superhero flicks in the Adam West Batman mode. Very nice, we get it. That doesn't mean you get to save the camp for later, sir.)

Remember The Goonies video game? Hell, there were two! Here's some play:

Ooh, and there was a 20th-anniversary remake done by these cats! And you get to play Sloth! Download it or just check out this video of the gameplay:

The film wasn't destroyed by sequels, tie-ins, merchandise, and other junk 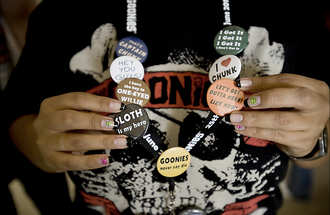 The Washington Post, reporting on the twenty-fifth anniversary pilgrimages to Astoria, Oregon, where the movie was filmed, said it best:

Since [1985], there's been almost nothing to fan the flames of fandom—no resuscitated spinoffs, a la Star Wars or Star Trek. ...There are always talks of a sequel that will never materialize. Still the fans come...

One fan credits God with leading her to buy Mikey's house. And yet Hot Topic has only a handful of Goonies items, despite the potential for a Napoleon Dynamite-level sellout in merchandise. Thank you, God, for making that so.
Tag: The Goonies
Close Search Return to SYFY homepage.