Remember last week's discovery of the moment Isaac Asimov left his typewriters behind and entered the computer age? Turns out that wasn't the only sci-fi gem waiting to be unearthed in Google's new digitized newsstand. 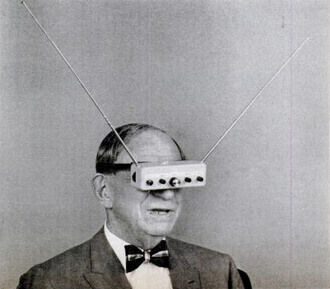 Hugo Gernsback, who started the first science-fiction magazine, Amazing Stories, back in 1926, and without whom we wouldn't be here today, was interviewed in the July 26, 1963, issue of LIFE magazine—where he modeled his "teleyeglasses" pocket-size portable TV set. He says he came up with the idea in 1936, but didn't think the world was ready to embrace them until the '60s.

Toy companies saw the success of Star Wars and ran with it, and by the 1978 holiday season they flooded the market with sci-fi toys, as can be seen in a spread from the November 1978 issue of Ebony. We don't know what George Lucas made of that Space Creatures mask, but we're pretty sure Darth Vader wasn't happy about it. 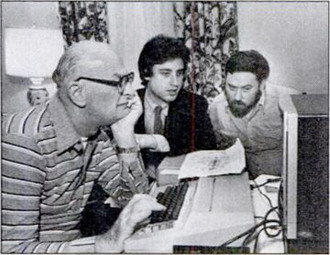 The June 18, 1984, issue of InfoWorld gives a peek at the early days of video games, with titles based on the works of Arthur C. Clarke (seen above with Byron Preiss and David M. Harris), Ray Bradbury and Michael Crichton that were able to be played by those of us with "Apple IIe and IIc computers, as well as Commodore 64 machines equipped with disc drives."

Looking ahead to the future of gaming, Jim Baen was quoted as saying, "It won't all be textual," and that games will incorporate "the plasticity of a personal dream, combined with the professionalism of a Hollywood movie." Wonder how that worked out.

Hard to believe that Nichelle Nichols was once a Hollywood newbie, but a profile from the January 1967 Ebony takes us back to a time when the woman behind Lt. Uhura was "tackling a new career after years as a nightclub singer." 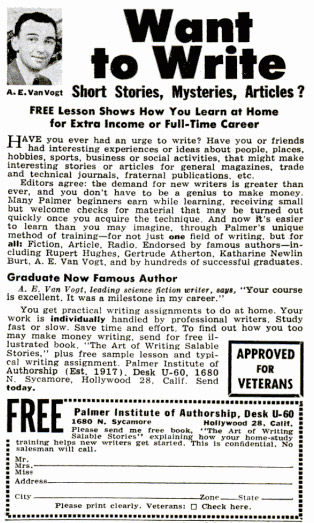 A.E. Van Vogt's first published SF story, "Black Destroyer," helped launch the Golden Age of science fiction (eventually inspiring the film Alien). Back in the June 1950 issue of Popular Science, he wanted you to learn how to follow in his footsteps. 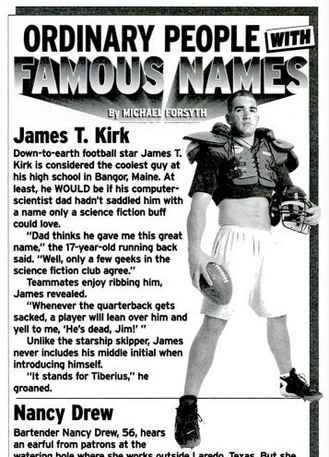 Forget William Shatner. We finally met the real James T. Kirk in the August 15, 2005, issue of the Weekly World News.

Before Star Wars, there was THX-1138. And we suspect that this review of George Lucas' first film, by the influential Judith Crist, from March 29, 1971 New York Magazine, may have led to his tuning out of critics.

Experimenting with rockets in Roswell 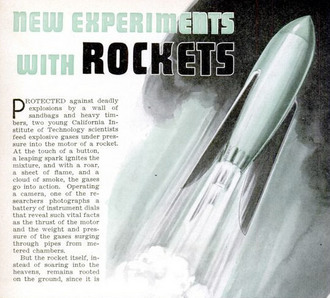 Say Roswell, and what comes to mind? The alleged alien incident of 1947, right? That might be all we can think of today, but as can be seen from the September 1940 Popular Science, the area was once better known for rocket launches than rocket crashes. 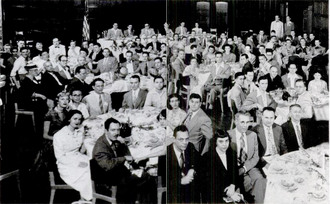 The members of the Hydra Club and the Eastern Science Fiction Association gather for a banquet as part of a "fanference" in the May 21, 1951, issue of LIFE magazine, which is the first time we've ever seen sci-fi fandom referred to as "a manifestation simiar to the jitterbugs of the hot jazz era."

Robert Heinlein's house of the future 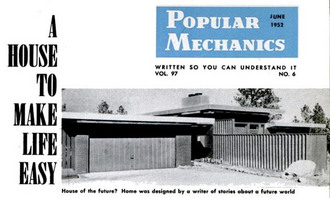 The June 1952 issue of Popular Mechanics asks the question, "In what kind of house will the captain of a space ship live during his stopovers on earth?" Robert Heinlein, whose Starship Troopers and Stranger in a Strange Land were still in the future, gives a tour of "a house that's called extreme today but may become conventional before the 20th century has run its course."

If you spot any other sci-fi gems in Google's new digitized newsstand—let us know!