The best April Fools' Day pranks are the ones that convince us some outrageous aspect of sci-fi has become real. For just a few moments, we're in a mindset that the world in which we live has taken a permanent change for the freaky. 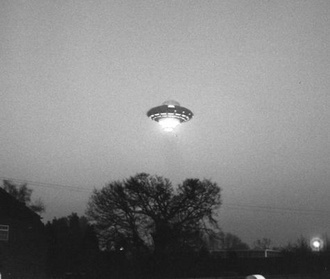 On March 31, 1989, people in London were treated to an amazing sight when what appeared to be a spaceship floated by. The spaceship had bright domed lights on the top and bottom and something that resembled a revolving restaurant in the middle.

Soon thousands of people were following the craft. Motorists pulled over on freeways and jumped out of their cars. (We also imagine they pointed at the craft and said "Look! Up in the sky! It's a bird!") Finally, the saucer touched down on a field in Surrey. With police in tow, humankind descended upon the device, eagerly anticipating Earth's first extraterrestrial visitor.

A door opened in the bottom of the spacecraft. The crowd grew anxious with anticipation. A police officer on the scene later admitted that he had "never been so scared in 20 years of being a policeman." With their collective breath hitched, thousands of pairs of eyes stared as from the spaceship emerged ...

The April Fools' Day prank was orchestrated by Virgin owner and adventurer Richard Branson. Part of the reason it was so effective was that it happened on March 31. Branson had planned to land in Hyde Park on April Fools' Day but was blown off course and had to land early. It's too bad this was never filmed for a Jules Verne-esque reality series called "Billionaire and Little Person Kill Time in a Cramped Balloon." 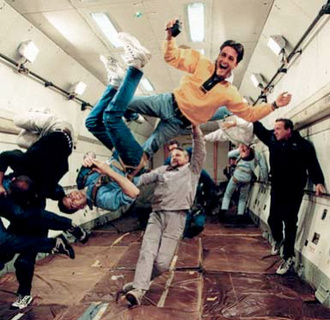 Planetary alignments feel almost magical. In 1976, noted stargazer Patrick Moore took advantage of this perceived mysticism to play a prank on the unsuspecting public. Going on BBC Radio, Moore announced that, due to Pluto passing behind Jupiter or some such nonsense, Earth would have less gravity at precisely 9:47 a.m. on April 1.

Moore went on to encourage listeners to jump in the air during this moment, so that they could feel a unique floating sensation. In fact, the prank worked so well that the radio station received many calls from listeners claiming it had actually worked. We're not sure if these people thought they were pranking the BBC or if they actually believed they were weightless and flying around the room. Either way, we're calling them crazytown. 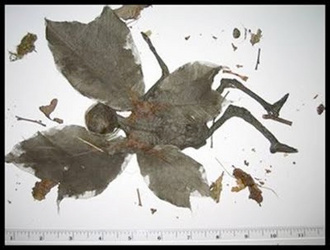 Dan Baines orchestrated a prank that had the world captivated in 2007. A few days before April Fools' Day, Baines posted a picture of what he claimed was the corpse of a dead fairy. According to scientific study, it had hollow bones in a similar structure to that of a child. Yet again, this prank took place in England. What is up with those cheeky Brits and their apparent love for AFD?

What had been intended as an ordinary prank for Baines turned out to be a window into the mouth of madness. Fairy believers (read: crazy people) from all over the world gave their enthusiastic feedback and advice. Baines recalls one man was adamant that the fairy's location be kept secret and grew upset when it was revealed.

On April Fools' Day, as planned, Baines posted on his website that the fairy body was a hoax. At this time, Baines probably figured things were all wrapped up. Unfortunately, Baines forgot how obsessive nut jobs can get. According to Baines, his inbox received many emails from people who were certain that this was all a coverup to prevent the world from knowing the truth about fairies. These people are silly: If movies have shown us anything, it's that fairies are skinny, pretty women who act coquettish. 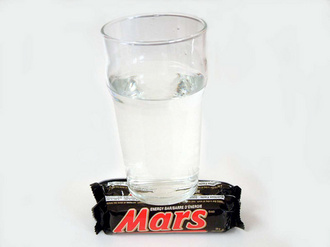 In 2005, NASA hadn't quite learned that misinformation was the bane of its existence, and decided to pull a hoax. On their website's front page beamed the amazing announcement that they had discovered life on Mars. After decades of failure and frank humiliation with roving around the Red Planet, it appeared that NASA had finally slain its demon.

Not quite. The image linked to an (allegedly) hilarious picture of a glass of water sitting on a Mars bar. We're not sure who thought it was a good idea for NASA to ridicule itself by appearing inept, a mere two years after seven brave astronauts sacrificed their lives. If they really wanted a picture to show the modern-day achievements of NASA, they just should've used a pic of a packet of mixed nuts.

Google Announces Jobs on the Moon 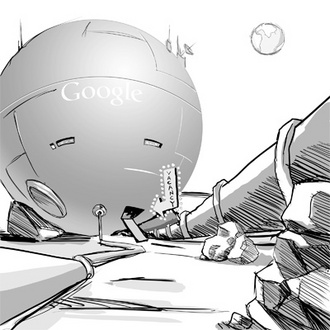 In a detailed website about the project, Google revealed plans to develop a way for aliens to be able to tap into the Internet, which is just about the coolest thing ever. Hearty individuals willing to relocate were encouraged to apply for openings. Sadly, it was all a giant joke, just like the modern prospect of a worker getting hired. 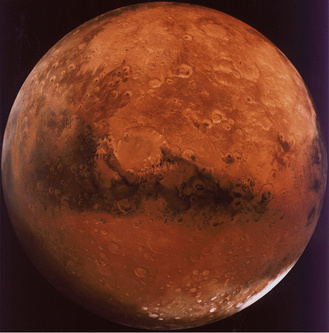 Following in Google's tradition of making an extremely detailed website for April Fools' pranks, Expedia created an outer-space travel site in 2009. Promising "No Interplanetary Booking Fees," the website offered the unbeatable deal of a flight to Mars for $99. That's a great price, since the website claims the normal price of a flight is $3,000,099.

But Mars isn't for those on a budget. After selecting your flight date and desired spacecraft, you are prompted to choose from one of several pricey hotels. We recommend the Olympus Palace, which sits atop one of the highest mountains in the galaxy.

It's all explained through a helpful flight path diagram. After leaving Earth, the spacecraft slingshots around the moon, passes through a wormhole and arrives on Mars. Maybe those engineers at NASA should put down their candy bars and study this obviously revolutionary technology. 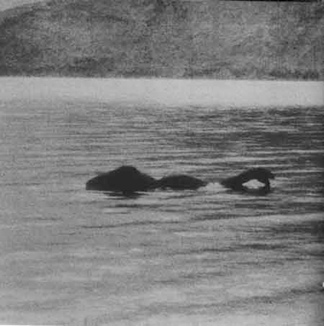 The Loch Ness monster has been a deep source for both paranormal theorists and pranksters. One such prank was pulled for April Fools' Day in 1972. Zoologists, who were on the scene trying to find evidence of Nessie, discovered the 15-foot corpse of some unknown creature.

Soon, word spread that the "Son of Nessie" had been discovered. Police were dispatched to make sure that the body was transported according to regulations. Scientists pored over the remains excitedly ...

Then they figured out it was a seal.

A zoo officer with a sick sense of humor had come across the natural remains of an African bull seal. The officer put the carcass into cold storage for a week to coincide with April Fools' Day, before tossing it on the lake shore. Which makes us wonder how many months the officer would've been willing to hold on to it if April Fools' Day had been a long time away.

Let's also not gloss over the fact that a weird seal that looked like a monster was found near Loch Ness. This just hammers home the theory that Nessie is an animal that we've already discovered, and not some ancient demon-serpent that will grant wishes, or whatever. 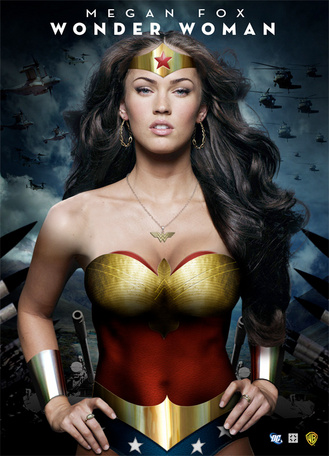 This April Fools' Day prank started out as a simple Photoshop job. However, this soon sparked rumors that the oft-ridiculed hot actress would be representing the iconic role. Wonder Woman fandom had conniption fits: How could such a perceived airhead represent one of the iconic cartoon symbols of women's liberation? More importantly, how could Lynda Carter now be the second-hottest Wonder Woman? That's impossible.

It was impossible. Soon, P.R. agents everywhere worked to quash the rumor that Fox had the role (which eventually went to Adrianne Palicki). When interviewed, Fox said that Wonder Woman was "lame" and her lasso that makes people tell the truth was beyond her comprehension. Fox would be better off in a role more suited to her talents, a role like Wilson the volleyball. 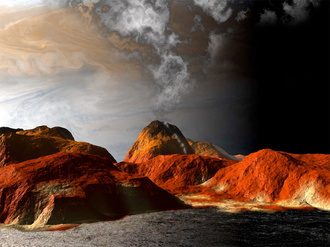 In 1996, the World Wide Web was just getting its footing as a revolutionary medium. AOL, the leading online service at the time, decided to play a prank on its customers. Frankly, a screen that read "Log on successful: 1 attempt" would've been a huge hoax for slow dialup customers, but AOL went in a different direction.

Instead, they announced proof of a massive government coverup. What was being covered up, exactly? The discovery of life on Jupiter, that hot-button issue the government is always trying to quash. AOL's president claimed to have direct proof of the existence of said life, and put it on AOL's front page for all 5 million subscribers to see. Rumor has it they wanted to do a 2010 prank announcing that extinct reptiles had been discovered using AOL, but then they realized the only people currently using AOL are already dinosaurs.

Hotels.com Offers Rooms on the Moon 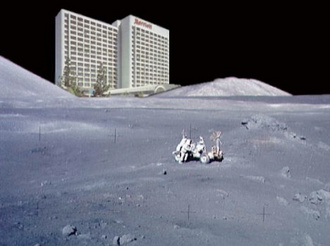 Using April Fools' Day travel website spoofs, it's possible to schedule an entire lunar vacation. While there, be sure to get the most selection by using Hotels.com's helpful lunar booking service. An April 1, 2009, press release revealed its intentions to lease lunar lodging. Not the biggest stretch for a company that offers a five-day space adventure.

The estimated average price for a "moon room"? About $1,500-$2,000 per night. Sounds like a great deal for a totally fake offer. We wonder if people who get press releases off the wire loathe April 1 because they have to spend all day filtering out the amateur jokemaking.

Something erased evidence of life on Mars, if there was life on Mars
Mars 'copter Ingenuity still flying high, spots hazards for the Perseverance rover

The response these incredible pranks generated shows just how much people want to believe in sci-fi. It's a great way to recognize and cherish our attachment to this incredible subject. These pranks leave the victims feeling not dumb and gullible, but rather hopeful and celebratory of our joint love for the genre. Here's hoping there's another great sci-fi hoax just about to take place.