Long before vampires were sparkly lover boys a la Twilight, the blood-sucking undead were classic horror baddies—and do-gooders have been killing them on the big and small screen for decades.

The classic techniques apply in most cases, i.e., wooden stakes, sunlight and beheadings, though most of these vamp-slaying highlights play with the old tropes a bit.

So if you're ever attacked by a horde of vampires, think back and for the 16th installment of our 31 Days of Halloween series, remember a few of these 11 awesome vampire kills for inspiration.

Load up on garlic and sharpen your stakes—here we go!

This 1987 vamp flick is a classic, and one survivor decides to sacrifice his mode of transportation to take out the vamp tearing up the motor. It's hard to argue with the logic, because even a vampire would have trouble surviving an exploding diesel truck.

Being a pay-cable series, HBO's True Blood has a level of freedom most shows would kill for. They use that license to full effect on their vampire kills, which trade out the usual wisp of ash for a gory pile of spewing blood and guts.

Interview With the Vampire

One of the sadder death scenes on the list, this one finds some main characters trapped in the sunlight and burned to ash. It's a classy, poignant death.

Arguably the coolest vampire death on this list, the infamous fire hug from the recent Fright Night reboot is a very interesting twist on the old fire method. All you need is a fireproof suit, a vampire in need of burning and a strong grip not to let him go. 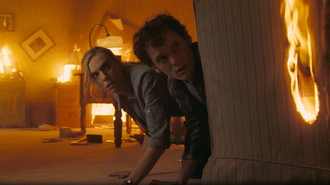 Clip sadly not available for embed, click here to view.

Easily the most heartbreaking vampire death ever, the finale of season two found Buffy forced to take out the love of her young life with a sword to the chest, sending him through a portal to hell. Throughout its run, Buffy featured hundreds of vampire deaths, but this was arguably the best.

The Blade trilogy featured a ton of gory, cool vampire deaths. But the mid-budget first installment set the dark tone with one of the best comic-to-film adaptations, which opened with Blade busting in on a vamp party and kicking a heaping pile of ass.

The final battle in this vampire vs. werewolves flick included one of the coolest death scenes ever, with a vampire sliced in half. Awesome.

The horror classic shows off one of the original sun-caused deaths, as ol' Nosferatu tempts fate and finds himself on the business end of the daylight.

The sister series to the aforementioned Buffy, Angel also featured an extremely awesome vamp death. Angel's ex-lover Darla gets pregnant (as a vampire, it's a long story), and the human soul of the child inside her drives her to stake herself to save the child in an awesome, tear-jerker sacrifice.

The latest vamp-killing period flick shows off the Abe Lincoln we never knew, who uses a big ol' ax to take out the fangy undead. It made for some pretty sweet kills.

This series is one of the best horror shows on the air, and it's featured some stellar vampire kills along the way. The best? When Sam uses some nearby barbed wire to slice off the head of a creepy vamp. 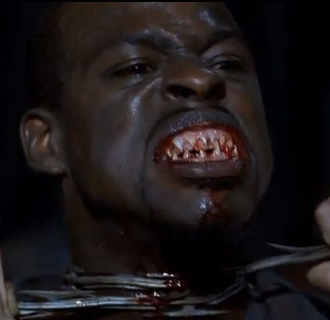 Clip sadly not available for embed, click here to view.

And here's a complete list of all 31 Days of Halloween features:

12 movie and TV haunted houses we wouldn't mind moving into

10 unsettlingly scary movies in which everyone dies at the end

12 deadly TV psychos we should hate (but secretly love)

15 Lovecraftian stories to read once you've read all of Lovecraft

Mickey, Popeye and more get spooked in 15 classic creepy cartoons

Dracula's Dog + 8 more WTF movies about the Prince of Darkness

15 awesomely horrific Game of Thrones deaths (+ a bonus LOL one)

13 horrific Kickstarter projects you can help fund before Halloween

12 gruesome horror scenes where someone loses a head

9 over-the-top horror films so disgusting they got banned

Check out 13 scary move trailers that still freak us out

25 creepy cosplayers who should be horrific but are sexy instead