11 outrageous examples of recycling from sci-fi movies and TV

You don't need to own a recycling plant to change the world. Heck, you don't even have to be from this world! To celebrate NBC's Green Week, we're recycling 11 classic sci-fi examples of recycling (and reusing), and who knows? Some of them (but not all) could help save planet Earth! 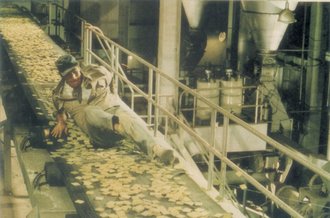 Soylent Green is a landmark piece of filmmaking, but almost nobody wanted to see it after watching this hilariously horrible commercial.

Be sure to check out the bizarre stuntwork at 2:43, wherein a stuntman does a badly choreographed "fall" which is really just sliding down a chain.

Four decades ahead of its time, this film was perhaps the first instance of using the word green to mean "we do whatever ridiculousness we want in the name of conserving resources."

MacGyver builds a plane out of junk 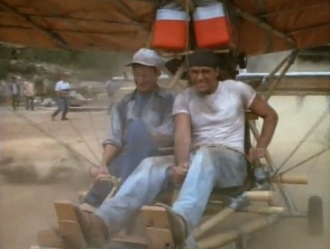 It goes without saying that MacGyver could fill a sci-fi recycling article all by himself. But we decided to choose just one of his most resourceful scrapped-together inventions, and the decision was easy from there.

In the fifth season premiere, MacGyver sneaks into a rebel compound that's holding some important guy prisoner. Without being detected, MacGyver strings together some poles, garbage bags, an engine and a bunch of duct tape. Soon he and his rescue pitch this absurd craft off a huge cliff and it honest-to-gosh flies. No show more beautifully blurred the little-known line between science and complete and total skepticism.

Let MacGyver's actions be an inspiration. Sure, we all might be sorting our recycle, but have you ever considered stapling recycling bags to yourself and jumping off a cliff? Take a cue from this real-life MacGyver, who builds houses out of Wal-Mart plastic bags: 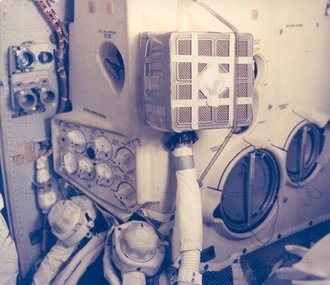 In 1973, recycling may not have been trendy, but it was used to save lives. As re-created in the classic space film Apollo 13, the crew of this ill-fated mission found themselves without a way to run their spent breath through a lithium filter to make it breathable. The answer involved repurposing all sorts of items: the astronauts' suit hoses, the cardboard covers on their log books, plastic bags meant for collecting moon rocks.

But all this still couldn't have come together without the airtight capabilities of one important tool: duct tape. Stashed on board since the early Gemini missions, duct tape no doubt would make an excellent gift should astronauts encounter aliens. ("Here is a tool that fixes everything.") But it's not just great in outer space; duct tape can make any reusing project come together more cohesively. 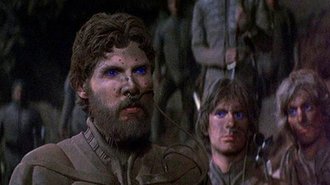 The Fremen are a hardcore society. They adapted to harsh desert conditions, learned to ride vicious sandworms and generally proved to be some of the awesomest fighters in the universe. All this while doing everything they can to conserve their supply of water. They looooove water—it's like they can't live without it or something.

In the book Children of Dune, Frank Herbert goes so far into detail as to explain that the Fremen have an abnormally long large intestine, thus allowing them to absorb more water. We thought this horribly unnecessary explanation was going to set up a scene in the 1984 David Lynch film where, to keep warm, the hero had to spend the night in a dead Freman's large intestine.

The reverence Fremen show for their limited water reserves stands at one of the most concentrated recycling efforts in all of sci-fi. One interesting way to reuse water was, after slaying an opponent in a duel, to drain the corpse of all of its water. Other civilizations use spice to fold the universe like a paper swan, but the Fremen couldn't even get bottled water shipped in.

Humans recycled as batteries in The Matrix 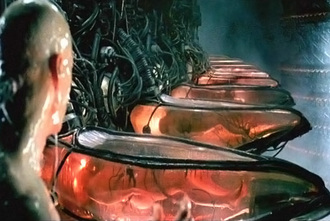 We don't want to go overboard with listing all the ways humans are recycled in the world of sci-fi. But perhaps the most memorable example of using the good stuff inside of us comes from the machines of The Matrix. In the world of 2199, power-crippled computers turn to humans for power. The electricity and heat generated is recycled into machine power using some sort of nuclear fusion that nobody really understands. Here, Morpheus attempts to explain. What isn't explained is how it takes less power to grow a human than the 120V they produce in exchange.

Despite its antagonistic presentation, there is much to be learned from these machines and their man-batteries. For instance, Morpheus says that we generate 125,000 BTUs of body heat. We're not sure how hot a BTU is, but we imagine they get pretty sizzling during the frenzied jam parts of "Takin' Care of Business" and "You Ain't Seen Nothin' Yet." The point is, all that heat can be recycled by putting on a sweater rather than running the heater. Also, we need to have USB charging ports installed into our skulls, posthaste. 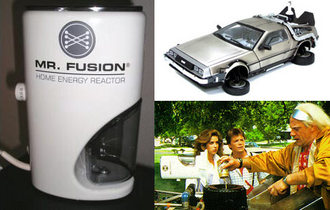 The future of recycling looks solid in the Back to the Future trilogy. Solving both our fuel and waste crises, the Mr. Fusion Home Energy reactor borrows a page from cockroaches to convert garbage into power. Of course, eventually this will undoubtedly lead to a garbage shortage, and then no one will be able to drive-fly to work until they've eaten food to make enough human waste to put in their cold fusion reactor. Or, they could travel back in time and buy all of our current garbage. Mr. Fusion could solve every waste and energy problem throughout the entire history of time.

Another idea would be to combine the Mr. Fusion-powered car with a toilet. Not only would this provide the fastest way to get waste into your fuel tank, but it would make long car rides virtually stop-free. The exhaust would probably smell horrible, though. You know how it smells when you drive past a cow ranch? That would be the entire sky, so you'd have to fly really fast and hold your breath. 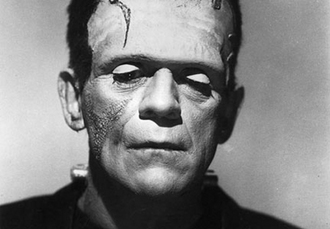 Dr. Frankenstein is truly a progressive thinker when it comes to recycling. He looked at all the human bones and slaughterhouse bits that were being wastefully thrown away and decided to recycle all those parts into a new being. The only real problem with this idea is that Frankenstein, for some weird reason, had the make-or-break expectation that his creature would be attractive.

The Doctor sees the hideous man-thing and flees, which gives his monster abandonment issues and leads to a world of hurt. So crazy Frankenstein stitches a body together and then shocks it hard, and somehow expects it to come out looking like Miss America? We can understand the symbolism between Frankenstein's monster and the ample plastic surgery and electrolysis that pageant queens go through, but this is ridiculous. We can only imagine Frankenstein fleeing from his wife's own birth because the baby was covered in ugly fluid.

We are still hoping against hope for a crossover film called FrankenMatrix. Then the electrical jolts that animate the monster could be generated by a human battery plugged into the monster's back. After all, Frankenstein met the Wolfman and Abbott and Costello and probably even had a fling with Marilyn Monroe. Couldn't he bump into Neo?

Tony Stark builds an iron suit out of scrap 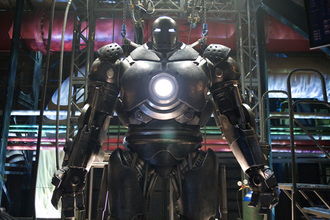 We always wanted MacGyver to get a job smuggling weapons, simply because we bet he could make some really cool stuff out of spare nuke parts. Our dream sorta came true when Tony Stark was captured by a terrorist group in Afghanistan and ordered to build a new missile prototype. Those terrorists were in over their heads from the start. One obvious possibility is that Stark is going to know how to build the missile, and will build it wrong. The other, far more likely event is that Stark is going to have no idea how any of that stuff works, as if you kidnapped Dick Cheney and ordered him to build a bunch of Halliburton stuff. Also, Tony Stark apparently had to steal everyone's tie clips to complete his suit:

This makes us wonder who would win in a fight, MacGyver with a box of paper clips or Tony Stark with a box of scrap metal. They both get a few minutes to build giant robotic defense machines, then battle to the death. Science-based kids' shows need more fights to the death. 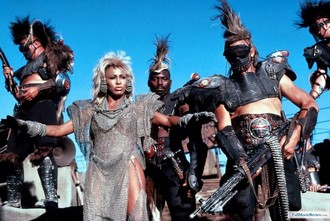 The apocalyptic wasteland that is Australia became the fictional setting for the apocalyptic wasteland of Max Max. In the third installment of the popular series, Tina Turner runs Bartertown (and don't you forget it) thanks to the power of harnessing pig excrement and refining the methane into electricity. We never understood why they didn't, you know, plant some of this pig excrement in the ground so they didn't have to endure an infertile wasteland. But Tina Turner is too busy holding bungee-jump battles to worry about any of this:

That's actually pretty resourceful, turning escaping methane gas into power. We have questions about whether the best use of that power was really the spinning neon sign above the Thuderdome. But still, it's nice that you can take the byproduct of one animal and turn it into useful electricity. We always wondered why the residents of Bartertown weren't require to supply their own "electricity fuel." We also wonder what it would smell like to work in a pig doot refinery all day. 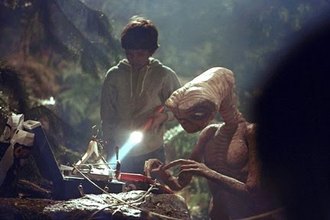 Aliens will always have the evolutionary jump on us, because they are just so darn resourceful. One of the most endearing moments of product placement in E.T. happens when he comes across a child's Speak & Spell. For those who are too young to remember, a Speak & Spell was an early 1980s toy that actually spoke using digital technology! Whereas now we use that stuff to effortlessly pilot our cars, it used to be used for kids to learn to read. Also, for aliens to communicate across galaxies.

We can only imagine how frustrating this whole experience must have been from E.T.'s point of view. He is mentally hyper-advanced enough to make a deep-space telephone out of a toy. Yet most of his time is spent trying to patiently communicate to a bunch of dweeby kids that "yeah, I'd like to talk to my home. Now, could you please point me toward your nearest intergalactic communication station or, failing that, a Toys `R' Us?"

The Thing builds spacecraft from helicopter 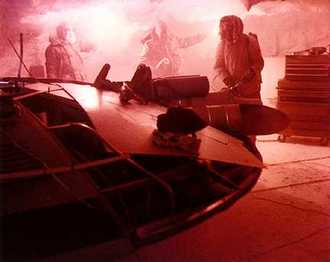 If alien creatures really do have the ability to build hyperadvanced stuff out of everyday human items, they must think we are hilariously inept. "Hey Grok-Il, I just found out what humans have been using those mini-warp drives for. They sprinkle salt on them and serve them at parties with wedges of cheese on top!" One specific case in point happens in John Carpenter's masterpiece remake The Thing. In this chilling arctic thriller, an alien runs amok among an isolated group of people. When not busy terrorizing everyone, the alien sneaks off with radio and helicopter parts to assemble a spacecraft:

So all this time we've been using the parts to fly around and talk on the radio, when we could've been zipping among the planets? Could the average alien go into an Earth scrap metal yard and simply solve the riddle of perpetual motion? We'd like to ask them , but they always seem to be so busy recklessly murdering people.

We hope that seeing this extraordinary examples of sci-fi recycling inspires you to make some down-to-Earth changes of your own. If everyone makes an effort, we can rescue the notion of a green planet from the realms of science fiction.