Tag: I Am Legend
Tag: invasion of the body snatchers
Tag: Planet of the Apes

It's okay for a film to modify a book a little for the sake of the medium. Heck, if they made A Tale of Two Cities into a movie today we'd expect at least 10 explosions and a hostage standoff. But in the case of some sci-fi films, the book's ending was completely thrown out in favor of a new plot twist.

We took a look back at the most radical book-to-film ending changes, and determined if they were better or worse than the original conclusion.

Planet of the Apes 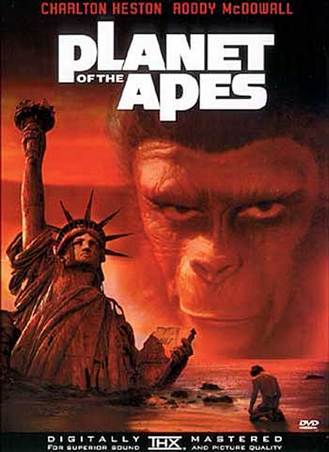 Fox is retconning the beginning of the series with an upcoming prequel, which we're pretty sure is called of the Rise of the Planet of the Apes of the. So it makes sense that the original Planet of the Apes actually completely changed the ending to the novel upon which it was based.

That's right, the (top-secret spoiler alert) "It was Earth, all along!" ending to the classic Charlton Heston film was a rewrite. La Planete des singes, the original 1963 French novel, has a remarkably different ending. In it, our hero astronauts escape into a spaceship and land on Earth. Real Earth, which is different from the Monkey Planet where they just were. Except now they're on Earth 700 years later and, oh my gosh, Apes took over. So the astronauts go back into space. What's weird is that they then write their story down, put it in a bottle, and float that bottle out in space. This book grossly underestimated both our communications revolution and our tendency to fill space with lots of garbage.

So who was responsible for the remarkable change that saw the astronaut realize he had never traveled to another planet? None other than Twilight Zone mastermind Rod Serling. 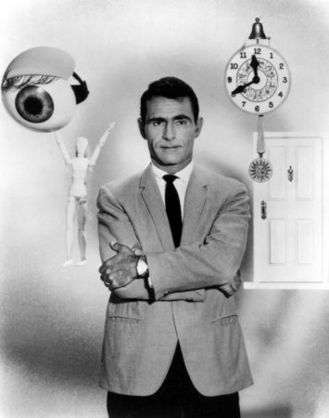 With his preponderance for making some of the most classic twist endings of all time, it was no wonder Serling decided to make a more direct connection. Although Serling's version of the script was almost completely overhauled, his twist ending stuck through the entire process.

Our Verdict? The movie ending was better.

As one of the most classic surprise endings in cinema history, it's hard to argue that Serling's addition didn't better the script. After all, having the astronaut learn all about apes on a planet, then travel to another planet which is identical seems redundant. By eliminating that extra planet, Serling pounded home the film's ultimate moral message: 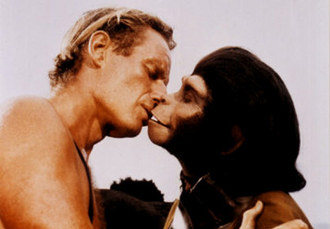 The title of the 1956 novel (and its 2007 film remake) refers to the book's final words. After battling infected humans for the entire novel, the main protagonist realizes that he is the only clean human left. He then sees himself how the infected see him: as a monstrous legend that brings death.

Seeing as how that's the entire frakking point of the novel, one would expect this twist to be emulated in the similarly named film. Othello implications aside, the film ends with Will Smith's character sacrificing himself to further the human's progress of curing the infected. The film's original ending gives a tiny nod to the classic ending, with the Darkseeker's humanity finally revealed to the character that Will Smith played.

Test audiences didn't like it, so Will Smith's character was given an even more heroic sendoff.

We understand that it's really hard to end a motion picture on a character having a realization. That said, the book's ending was a classic, while the movie just strung together a formulaic Hollywood climax. Plus, when a culture of light-fearing white men regard a black guy as a "mythical terror," it gets kinda awkward. 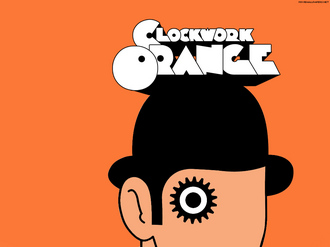 When the novel was published in 1962, it ended with protagonist Alex becoming bored of violence and resolving to settle down. However, when the novel was brought to the United States, the publisher insisted that the final chapter be dropped. It was upon this book that Stanley Kubrick based his 1971 masterpiece of cinema. So, although all current reprints of the book end with Alex turning over a new leaf, Kubrick's film ends with Alex deciding to be violent. Character development was not a key point to this film.

Our Verdict?The movie ending was better.

Here's an instance where the book chose the formulaic route. Although Alex's character finally turns away from evil, it's simply from growing jaded from doing too much evil. But the film was a symphony of twisted satire, and the ending didn't detract. Alex's final sarcastic on-screen remark about being cured satirized both the conventional twists of science fiction and the views on psychological experimentation at the time. Also, the end of the film made us feel good because it meant there would be no more brutal rape scenes.

Invasion of the Body Snatchers

The Body Snatchers is a 1955 novel by Jack Finney. Like the film, its sinister undertones of townsfolk being replaced by replicants echoes the fear of communism brought on by the Cold War. So it's appropriate that the book ends with some stereotypically American gusto—the hearty citizens get all angry and stand up to the pod people, who decide they'd rather not fight and float away.

However, 1950s' film audiences were less interested in well-woven metaphor as they were in getting scared so they could make out. So the film's creators made the movie end with the classic scene of Miles screaming at the camera:

The complete opposite of the book's ending. However, producers found the film to be bleak, so they added the epilogue where police alert national authorities. Not really the victory the book portrayed, it only casts a faint glimmer of hope for humankind.

Our Verdict?The movie ending was better.

Admittedly, both endings have grown a bit thin as Americans stopped the us-versus-them mentality and ended the Cold War. However, there's something to be said for the fact that moviegoers had to hear Miles scream at them, "You're next!", then emerge into a world where anyone could secretly be a communist. When really, we now know that communists are just like you and me, except they sleep in giant pods. 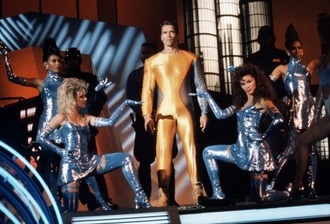 The Stephen King aka Richard Bachman story involved a game show where a man is chased by the entire world. There is all kinds of the usual post-apocalyptic savagery one would expect, with a brutal game show network controlling much of the local finances. The book appropriately ends with a large plane destroying the headquarters of the network.

In the 1987 Arnold Schwarzenegger film, things are a bit different: 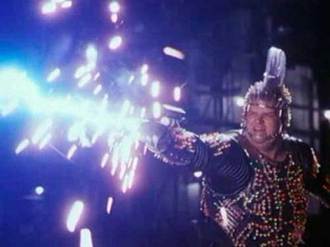 The wasteland game show reality is again used as a backdrop, but with comic-book effect. Arnold battles a bunch of weird henchmen who bear a scary resemblance to Tron guy: 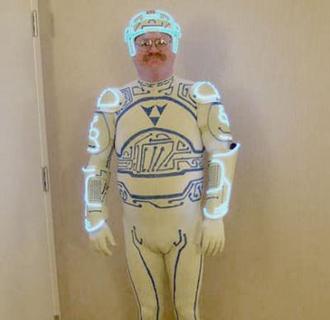 It ends with the evil network leader being murdered to a cheering crowd. This bit of humanity comes after the shocking truth about him is exposed: He manipulates the outcomes of his reality TV game shows (gasp!).

After learning that these reality game shows weren't always real, the crowd in the movie is moved to riot in favor of truth in media. Is it possible for an ending to less accurately reflect events in real life? 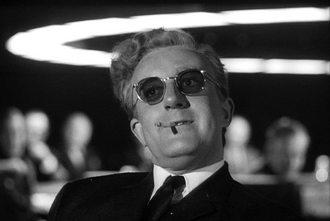 The original novel was not a comedy. Keep that in mind as we summarize the ending. A bunch of nuke-armed airplanes are destined for Russia. At the climax of the book, all of these planes are recalled, save one. Following the detonation of this nuke, the U.S. president offers the Russian leader the right to nuke Atlantic city for retribution. We did not know that the Russians wanted the Rat Pack dead so badly.

Stanley Kubrick again showed his book-updating prowess by making his film a comedy. What better way to end a comedy than with nuclear detonations going off across the entire planet? Also toward the end of the film is this awesome, nuke-riding scene:

Our Verdict The movie ending is better. The movie ending has its desired effect: a huge bleak punchline. However, we just can't understand the book seriously portraying an offer to nuke one's country's own crappiest city. Imagine if for World War II reparations we offered Japan two cities? Sorry, Camden and St. Louis. 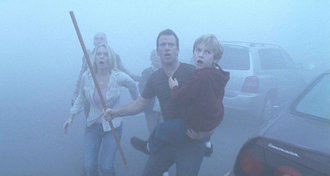 Another adaptation of a Stephen King story, this film is unique in that Stephen King has said he loves the director's revised ending. King left the end of his story ambiguous, with survivors going toward the source of a radio transmission while the mist creeps on.

The 2007 film version of The Mist has a much bleaker, shocking ending. Unable to escape the mist, the main guy shoots his kid to prevent him from an agonizing death. Then, authorities show up and say that the problem is under control.

Seriously, King may have loved it, but we have some problems with the film's ending. Mainly, the fact that soldiers show up and have the mist all under control. Really? 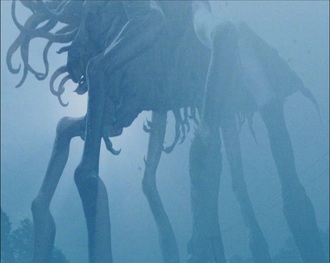 There were 500-foot monsters jumping into our planet and destroying everything in sight, but apparently the military has got that all taken care of, easy-peasy?! We prefer the questionably hopeful conclusion that is a hallmark of early King short stories. At least, we prefer it more than "Yeah, those inter-dimensional Lovecraftian demons? Naw, we just used some flamethrowers, it's totes cool."

More I Am Legend

Can viruses alter human DNA? The science behind 'The Omega Man'
Self-quarantined? Here are 5 pandemic movies where we ultimately beat the virus

Looking over these films, it seems like it's frequently okay to flip a book's ending for the big screen. So don't be surprised if The Hobbit ends with Bilbo realizing that it was all a dream and he's really an Oompa-Loompa.

Tag: I Am Legend
Tag: invasion of the body snatchers
Tag: Planet of the Apes
Close Search Return to SYFY homepage.