11 secrets you should know before watching The Event's premiere

Talk to the people involved with NBC's new series The Event and there's one thing you won't find out about ... what the actual event really is. Despite that, we were able to expose some other secrets by chatting with stars Blair Underwood and Jason Ritter and creator Nick Wauters.

What we do know is that the series premieres after Chuck at 9 p.m. ET, in Heroes' old slot. And while it's got plenty of action and you hear comparisons to 24 and Lost, there's no denying that The Event is not really like any other show on TV right now.

In fact, here are 11 secrets we uncovered about the new series. Consider them spoilers: 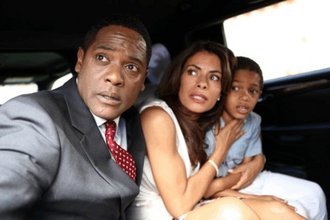 "It is a combination mix of adventure, political intrigue," said Wauters. "There is a love story. There's a little bit of science fiction in there. It is definitely a thriller. So there are a lot of different elements that you will find in this show."

That's a lot of stuff to throw in one series. But the show's creator, who is a big fan of serialized shows, promises, "This kind of has the pace of 24 and the character development of Lost."

"But really, overall, the first few episodes will really just take you on an amazing roller-coaster ride. I think that is a ride you're not going to want to miss. Definitely check out the pilot: Something happens at the end of that you won't expect. That I can guarantee you," said Wauters with a laugh. "This show is not really—you really can't define or understand the show until you've seen the last few seconds, and then that's what defines this show."

The event, meaning the actual event the series is based on, is ... 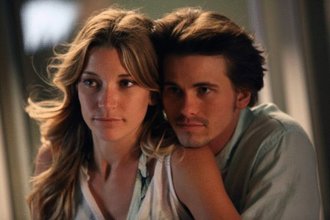 Sorry, you're just not going to find out that easily. According to Underwood, who plays President Elias Martinez, "What I can tell you ... is that the event is something very eventful, but it is something that can potentially change the course of mankind as we know it. In a nutshell, that's what is to come."

So it's a global event of some kind. Wauters gets slightly more specific. "The event is a seminal event that will take place within the world of our show and affect our characters. We'll follow our characters as things lead up to the event, throughout the event, and then after the event. So the event is not the endgame, and things will happen past the event in the series."

However, it's not all about the event, said Underwood. "With a show named The Event ... I think it's very wise and clever to focus on the characters that are within this world."

The Event is planned in three parts 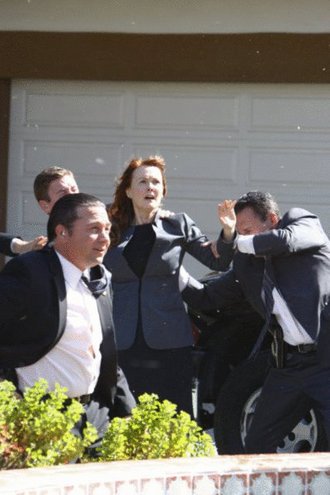 "In terms of what the event is, of course, that's the overriding question. The way the series is laid out is that there's a pre-event," said Underwood. "The event is something that is to come. It's all about ramping up to the event. We will see the event at some point, and then it's the consequences and the aftermath of that event."

"For the most part, only a few, a handful of people are aware that this might be coming, and eventually more and more people will find out, including our audience. And then our audience will experience that journey with our characters, and waiting for the event to take place, and then going through that event, and then living past it," said Wauters.

And how long before the event happens? We'll have to wait and see, said the cagey creator.

And you thought Lost messed with time: 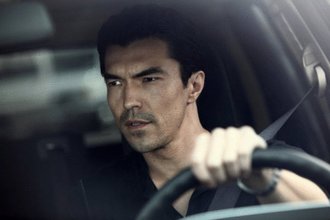 Almost from the beginning of the pilot, The Event skips around in time in a way that few other shows have been able to get away with. "I knew I had to play with time and structure and time shifts and things like that," said Wauters.

For Ritter, who plays Sean Walker — the everyman whose girlfriend mysteriously vanishes and who stumbles upon a government conspiracy while investigating her disappearance—it's one of the things that drew him to the project.

"I was fascinated by having to put all these puzzle pieces together. Seeing these characters jump back and forth through time and have, for instance, my character be in a completely different place emotionally in the space of 11 days was really intriguing to me. And then, on the other hand, all the characters felt fully fleshed out and real, and it felt like we were in the hands of the first chapter of a really great story. And that was exciting to me."

How The Event is NOT like 24, Lost, FlashForward or Heroes 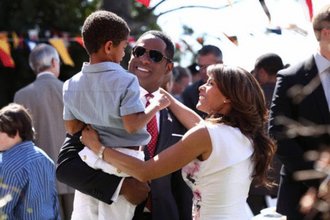 "Here's the deal," said Underwood. "I think people should watch the show, because, really, tonally ... and I know this has been said, but it's really true ... in the tone of the show, it has elements of 24 in its tone, and elements of Lost tonally. So to have a political thriller with science fiction undertones is something that obviously speaks to an audience," said Underwood.

"24 is gone. Lost is gone. Heroes is gone. FlashForward people liked from the very beginning. All those shows are gone now. So this show, The Event, fills the void, and it's not just tapping into those touchstones and those elements. It really is well done and well written. We have Evan Katz, who was part of the 24 team for years, Jeffrey Reiner, Nick Wauters. So we have a great team of people that know how to do just that," he said.

"They've carved out their own story and way to intrigue people," added Ritter. "But I think one of the things that they really wanted to make sure is that they knew exactly where they were going."

It is sci-fi, but it didn't start out that way 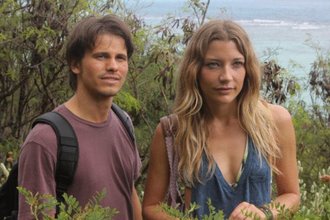 According to Wauters, the original version of the script actually did not have any sci-fi in it. But then NBC asked if he would add "some kind of science-fiction twist. ... They almost sounded apologetic, like, 'We're sorry, but we would like some sci-fi.' I'm a huge sci-fi geek, so I was more than happy to do it ... to oblige," he said with a laugh.

But The Event has only a touch of sci-fi in it so far, said Ritter. "We're only in the middle of shooting episode six right now. But so far this has rung true. The pilot is about 95 percent action and political conspiracy and things like that, and about 5 percent sci-fi. Just a tiny little element in there to make it interesting. And that's been about the percentage of the show. I mean, it generally takes place in the world that we are living in, with just a little fantastical element that sort of takes it to the next level, which is really exciting."

There will be cliffhangers ... but that's not necessarily a bad thing 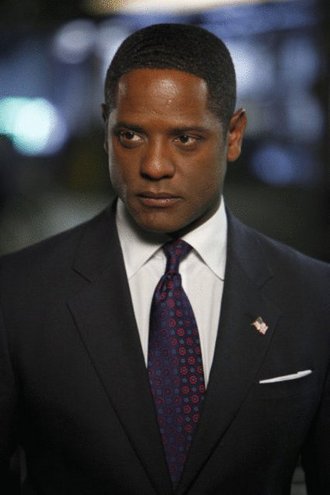 "What's great about this show is that if they pose a question, and when they come back from the cliffhanger, it picks right back up where you left off," added Ritter.

Even the actors don't know all the answers: 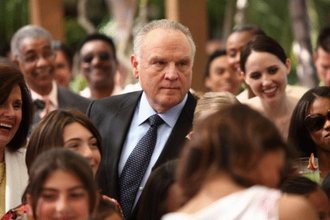 Knowledge about "the event" is on a need-to-know basis, said Ritter. "Laura Innes does know what the event is. I'm just in the dark, so I'm trying to figure it out. ... I mean, for me it's great, because I'm pretty terrible at keeping secrets, so it's actually a relief for now not to know what the event is, so that when people ask me I don't have to lie."

The night before they started shooting the pilot, each one of the actors received "a dossier delivered to our house with our entire backstory, with the direction on top and red letters: 'Confidential. Do not share with anyone, including other actors,'" said Underwood. "So they've been giving us some pretty extensive backstory."

Laura Innes' character, Sofia, was originally written as a male 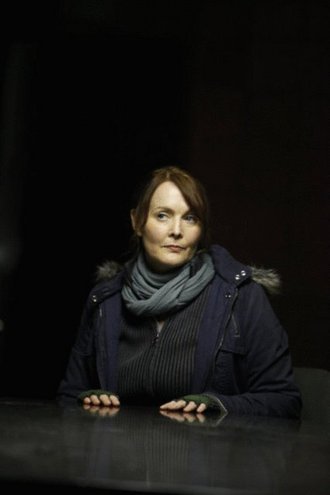 Wauters had planned to have the leader of the mysterious detainees be a man. That is until he saw Laura Innes try out for the role.

"She is a fantastic, fun woman," he said. "Came in, and the part she actually read for was originally written for a male. But I had asked our casting directors to bring in just a couple of actresses just in case, keep it open. And we spent an entire day looking for people for that part, and we didn't find anyone, and then she came in and just, again, blew us away, and that was it. We knew that she was going to be that character. I rewrote the part, and she's now Sophia. She really earned that part, and it was customized for her." 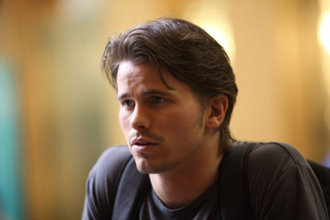 "Sean Walker has definitely had to grow," said Ritter. "He's grown a lot in these last couple weeks. I mean, I think that there was a certain innocence to his character before all of this happens, and he quickly has to become a man. But I don't think I'll be torturing anyone anytime soon." Then Ritter considers the possibility. "Well, maybe I will."

There will be answers, and you won't have to wait forever to get them:

"This is important to know. ... NBC and our producers have been very acutely aware of some of the shows in the past that felt as if, to the audience, they weren't thought through," said Underwood. "And sometimes the audience can be frustrated. And I can tell you ... by the second episode, a lot of the questions will be answered ... in terms of who these people are, who the detainees are," said Underwood

"One thing we're definitely going to do is we're going to answer major questions pretty early on, so people won't have to wait very long for some of these major answers. We will still keep some, of course, because we have to keep people intrigued for later on. Basically my goal is to keep our audience hungry and not frustrate anyone," said Wauters.

"They've thought through this world, the mythology of this world, these characters, and really kind of plotted out the first five years, but really clearly the first two years," said Underwood. "Now we know in television that can alter depending on what the audience wants to see ... this, that and the other. But it's important, I think, to take a stab and know where you're going."

Will you be tuning in to The Event?