11 things about Star Trek that made us go 'WTF?'

We love J.J. Abrams' new Star Trek and reservedly recommend it to all, including longtime fans, those who've never heard of Star Trek, and everyone in between. Call it a reboot, a re-imagining, a crime against canon—we're in, and we're ready for Star Trek 2.

That said, there were more than a few moments in the new film that left us shaking our heads and wondering, "What was J.J. thinking?" After conferring with a bunch of people who've seen the film too, we compiled a list of the 11 most egregious problems with the movie, which opened in theaters today. (Big spoilers ahead if you haven't seen the movie!)

11. Kirk's clown hands. Did we really need that?

9. That whole plot point about how using the planetary drill thing (suspended improbably by what looks like a mega-huge strand of barbed wire) conveniently disrupts transporter beams and communication.

8. Mining ships of the future have enough weaponry to destroy a Starfleet armada. What exactly are they mining? (Yes, we know there is an explanation for this in the prequel comic, but if you need to read the comic to explain the movie, that's a problem. Would explaining it to the movie audience have been that difficult?)

7. Uhura casually tells her roommate that she translated a mysterious message detailing the destruction of a Klingon fleet by a large, Romulan ship, but fails to inform her captain until he's about to fly into a trap.

6. If he's getting so much action, why can't one of Spock's emotions be, you know, kinda happy? Why so dour, my Vulcan friend?

5. Rowdy officers must be jettisoned off the ship in life pods and left on ice planets. Apparently the brig was broken?

4. It's OK, though, because if you do that, the person in the life pod will manage to land right next to THE ONLY OTHER PERSON ON THE PLANET who has also been stranded there.

3. The bridge is the best place to bring suspected saboteurs. OK, this is actually a time-honored Trek tradition. But still.

2. If you accidentally get sent back 25 more than 150 years in time, it's better to take revenge on the person who was unable to save your planet than to actually, you know, TRY TO SAVE YOUR PLANET!

1. The random Star Wars and Cloverfield-like monsters appearing for no particular reason. 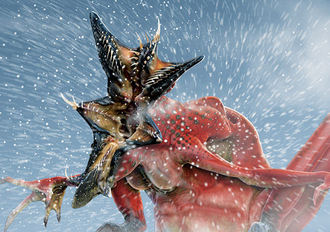