Are plants the missing link between ancient astronauts and Earth? One look at these freaks of nature is enough to convince us. We combed the planet to find 12 plants that make the horrific Day of the Triffids look as tame as The Happening. 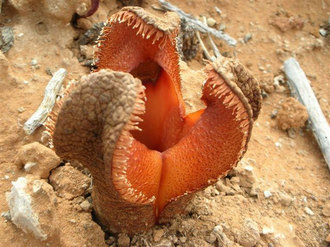 This plant's main defense seems to be striking cold-blooded fear into the heart of any predator that comes near. Whether it is bursting from the sand, as in the above pic ... 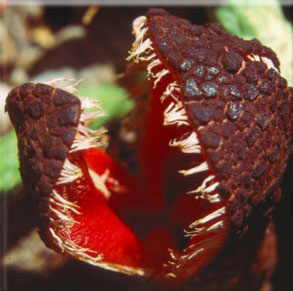 ... or bursting through some poor space soldier's chest, this plant lives to scare. First of all, it reeks of dung, as one of its favorite friends is the dung beetle. Eventually a dung beetle will crawl into its jawlike leaves (proving that eating dung gives a creature enormous courage). At that point, rather than eat the beetle like the merciful Venus flytrap, the Hydnora Africana will trap the dung beetle alive for a short period of time.

The goal is for the beetle to lose bodily fluids (perhaps from being so scared), thus pollinating the flower. Having had a good time, the flower opens, allowing the no-doubt-traumatized beetle to escape to a relaxing pile of dung. 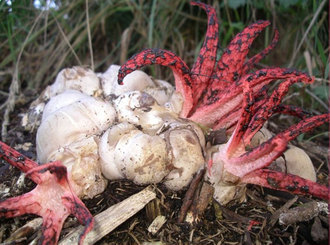 What looks like the hatching of Cthulhu is actually an Australian fungus. It hatches from an egglike substance and pollinates through flies. It is because of this that scientists think it has evolved to resemble decaying flesh, because that attracts flies. 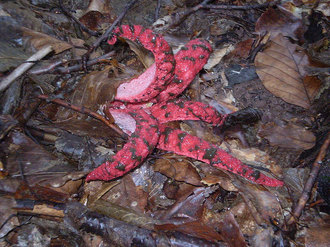 Also, it apparently completes the disguise by smelling of rotting meat. Did we mention it reproduces by making something that looks like eggs? If the world of fungus were a cartoon, this creature would have its own evil castle. 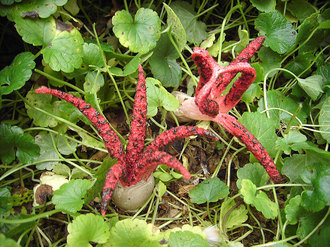 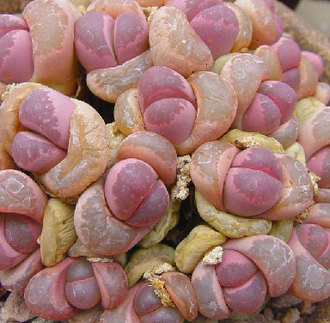 Over time, this plant has found that its best chance of survival is to resemble a stone. Because what animal thinks about picking up a stone and eating it? 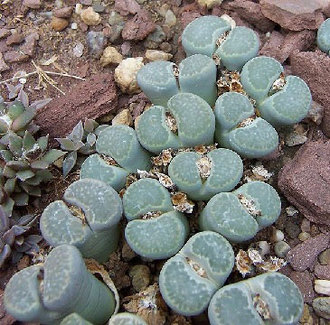 However, instead of just looking like a plain old gray rock, lithops decided, "Hey, why not be fabulous?" As a result, many gardeners like to grow them simply for appearance—although sometimes that appearance can be alien and horrific. 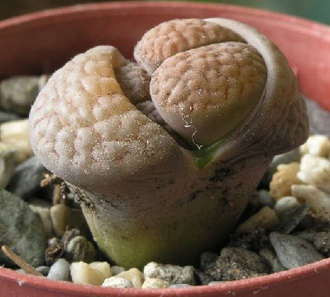 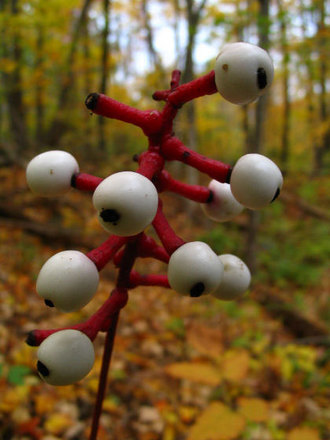 Doll's eyes are a unique plant native to the eastern parts of North America. Naturally, the most shocking part is the white berries it produces. Eating these berries can be fatal to humans, which is what you get for trying to eat a bunch of eyeballs. 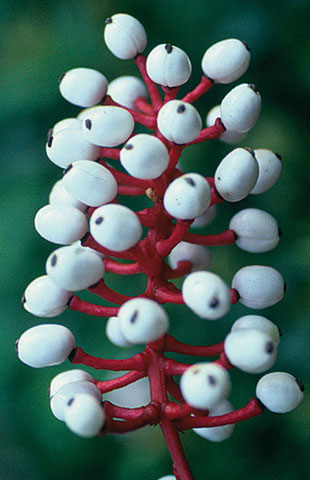 Oddly enough, birds can eat the berries just fine. It is birds that provide the pollination the flower needs to continue on. Which just proves that Hitchcock was right: Birds have a natural inclination to eat eyeballs. 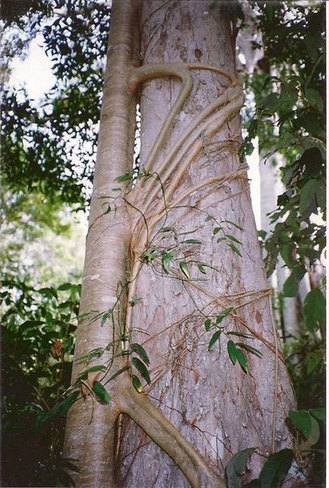 If aliens tried to invade Earth by disguising themselves as trees, then sucking other trees' nutrients, they would already have a competitor in the strangler fig. 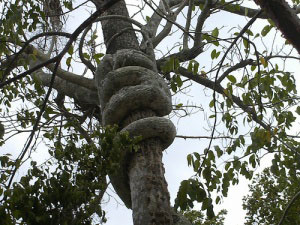 No doubt all of the normal trees think this plant is a total jerk. Often it will kill the tree to which it is attached. That's a slow and agonizing death for a tree: watching a predator slowly grow on you for dozens of years. 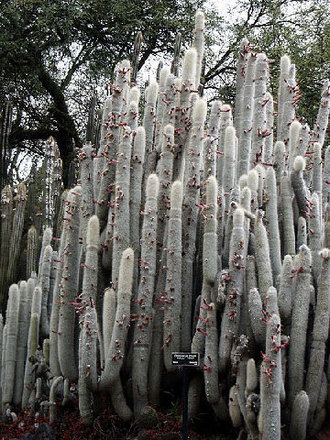 Silver torch is an interesting name for this species. We probably would've gone with "alien worms cactus," which is admittedly not as catchy. 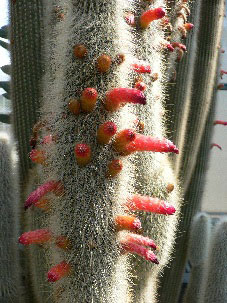 In fact, those weird parasitic-looking red things are unopened flowers. This South America plant's flowers hardly ever open in nature. Which is weird, because we suspect that no right-thinking predator would ever come near that prickly, scary plant. 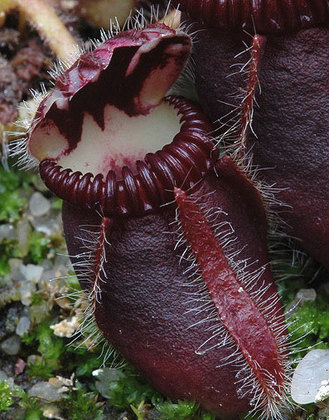 What looks like a smiling red trash can is really an elaborate trap to catch large food. This pitcher plant has a pool of liquid in the top. When insects try to get a drink, the lid closes and the liquid is revealed to be digestive fluid. 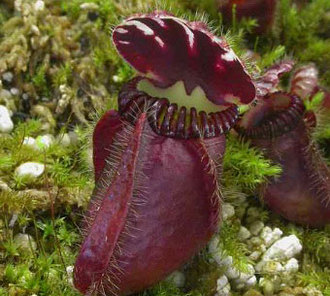 It's kind of a silly strategy: Paint your stomach bright colors, then sit there and hope food crawls into it. But it's made the pitcher plant one of the more diverse carnivorous plants. As long as insects stay pretty stupid, the pitcher plant will always have a steady supply of food. 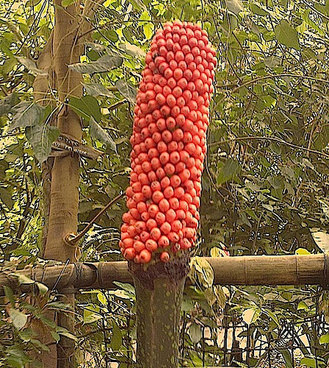 A lot has been said about the corpse flower: It rarely blooms, and it reeks of decaying flesh. For some reason, this has made it an extremely popular exhibition flower. But what people don't focus on is that when it grows seeds, it looks like a thousand-eyed baseball bat. 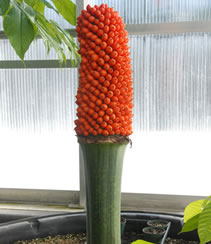 It seems like a lot of flowers like to gross out potential prey. That's not a bad strategy—the next time we get mugged we'll try vomiting all over ourselves. 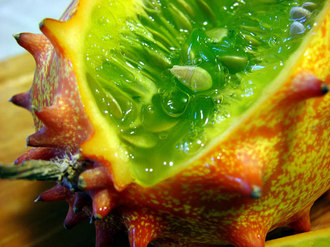 Apparently, growing spikes all over its body wasn't enough to stop predators, as humans like to eat it the world over. Even though it definitely looks like an alien mouth. 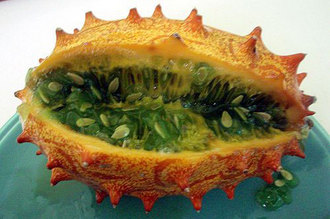 Seriously, many people look at this thing and say, "Mmmm, I'd like to eat that." It's grown in California, Africa, South America, New Zealand and Asia. So we suppose we're the freaks for not wanting to try new things, if those new things look like they want to mate with our face. 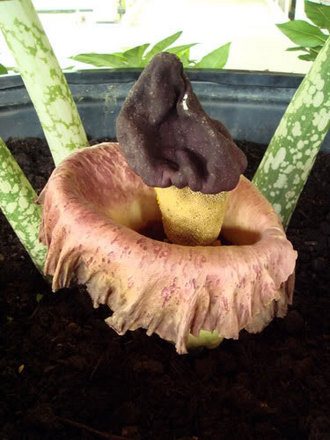 We're not entirely sure what this beastly plant has to do with elephants or feet, although it is a yam. The giant flower makes it a popular cash crop in Southeast Asia. 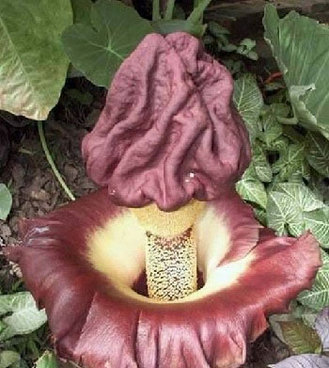 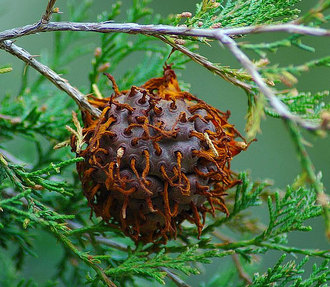 This gross fungus attacks the hanging apple, turning it into something that looks like an alien parasite. 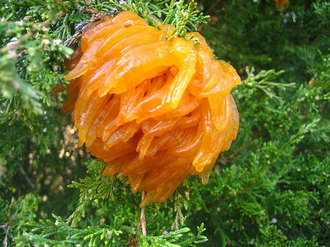 We wonder what being a cedar apple with rust fungus feels like. We imagine it's like being disemboweled by one of those traps from Saw, except in super-slow motion. 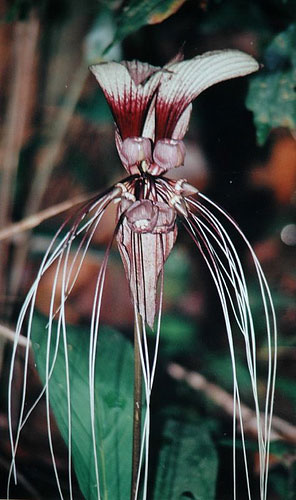 The mutant product that would probably spawn if Batman had a baby with one of Poison Ivy's plants. We'd imagine that, for a plant, having one of these growing near is the equivalent of that scene in Star Wars where that giant ship flies overhead. 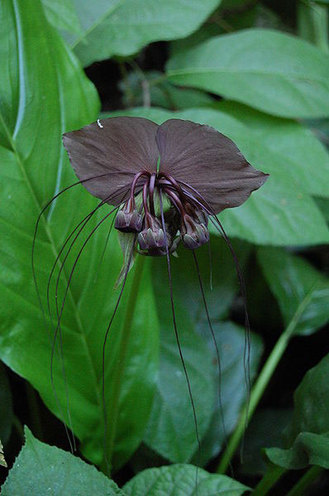 This plant looks like it flew straight out of Babylon 5. Animals are probably afraid to go near it, thinking it could face-hug them at any minute.

The flora and fauna of Earth definitely contain some of the most odd-looking specimens of all time. So, if you're looking for alien life, stop gazing toward the stars and start staring at the ground.