Fox just announced what could be one of the biggest sci-fi series in TV history, but they were maddeningly coy about any actual details. They told us it's from Steven Spielberg and it's got dinosaurs and time travel, but that's about it.

We did some more online investigating and came up with 12 good tidbits about the show. (And as soon as we find out more, we'll let you know!)

'Tiny Toons' reboot on HBO Max will feature a 'Dumbledore'-esque Bugs Bunny, return to Looniversity
Jaws has an infamous, gory deleted scene — and it's good that Spielberg cut it

1. The production price? A cool $4 million an episode: "This thing is going to be huge. It's going to take an enormous production commitment," Fox Entertainment president Kevin Reilly told the press.

2. TV critic Todd VanDerWerff apparently managed to get his hands on a script. On May 18, he tweeted: "Read Terra Nova last night. Didn't feel like first episode of a TV show. Felt like first act of a movie. That said, features word Allosaurs."

3. Because of the huge per-episode price and maybe even the script, the traditional method of filming a pilot and then shutting down the production may well be skipped and the first 13 episodes filmed together, as it would be simply too expensive to shut down and then restart production.

4. From the press release: "The series centers on the Shannon family as they join the tenth pilgrimage of settlers to TERRA NOVA, the first colony of humans in this second chance for civilization." The principals include father Jim, wife Elisabeth, young son Josh, teen daughter Maddy and a fellow named Commander Frank Taylor. Hmm, isn't that pretty much the character dynamic of Lost in Space, minus an effete scientist and a friendly robot? Well, maybe there will be a friendly allosaur.

5. Also: "...the Shannons have brought with them a familial secret that may threaten their citizenship in this utopia." Doesn't anyone screen time travelers anymore?

6. Why on Earth are people comparing this show to Avatar? 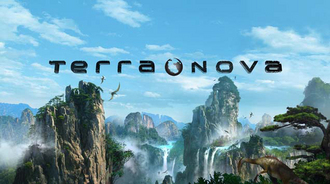 7. Other big wheels with a hand in the production include Brannon Braga (executive producer of 24 and longtime Star Trek scribe) as the show runner, David Fury (writer from Lost and Buffy the Vampire Slayer) and Peter Chernin.

8. Chernin was Rupert Murdoch's right-hand man at Fox but left last year after two decades with News Corp. The New York Times reported earlier this month that Chernin was "assembling his own enterprise, a company of considerable ambition that will meld original content, like feature films and television series, with cutting-edge technologies that use the Web and other digital ways of delivering entertainment." A week later, Chernin Entertainment was announced as one of the forces behind Terra Nova. Can we look forward to webisodes, character blogs, easter eggs hidden all over the Internet and perhaps even an ARG? We'll let you know.

9. No major casting decisions have been made yet—Kyle Chandler and Kevin Bacon both turned down the lead. Whether this is due to script troubles or just an unwillingness to commit to a long TV project (Bacon has three more features to complete) remains to be seen.

10. Terra Nova is scheduled to come out midseason, but beyond that Fox is being cagey. "We don't want to tie it into a date. ... We want to do this show right," said Reilly.

11. Shooting will begin later this summer in Hawaii.

12. Terra Nova is based on an idea by Kelly Marcel, and the script was co-written by Craig Silverstein. Silverstein is a writer and producer with a sizable TV resume—he's worked on Bones and The Dead Zone. But Marcel? A few BBC pilots and scripts, including a musical stage version of Debbie Does Dallas. Her biggest hit to date was the rewrite for the underground sensation Bronson, a biopic of the infamous British prisoner Michael Gordon Peterson.