Leia Organa, who graced the Star Wars universe with a no-nonsense attitude and a killer set of hair buns, is the most famous sci-fi princess in history. While Luke was shooting womp rats, Leia was busy learning to braid hair ... and to plot a rebellion. All in the life of a princess, right?

There are other kick-ass princesses in science fiction, though, who don't get as much notice as Leia, but who definitely should. So we've righted that injustice with a list below of 13 princesses you need to start paying more attention to. Some of them rule by war, some rule by peace, and some just totally rule: 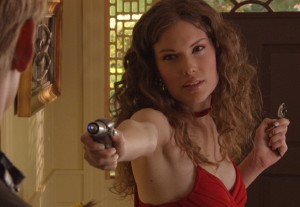 Flash Gordon has had multiple incarnations, including a comic strip, a movie serial, an animated series, a full-length feature film and a live-action television show. And in every adaptation, Princess Aura has wanted Flash for herself. Toward that end, she's tried drugging him as well as out-and-out seducing him to win his affection. However, Flash has only had eyes for the helpless Dale Arden. But while Dale fainted at the sight of Flash being tortured, Aura rescued Flash, ray gun in hand. In every version, the princess (who eventually finds love with Prince Balin) is decisive, powerful and smart.

But only in the 1980 version does she get lines like "No! Not the bore worms!" 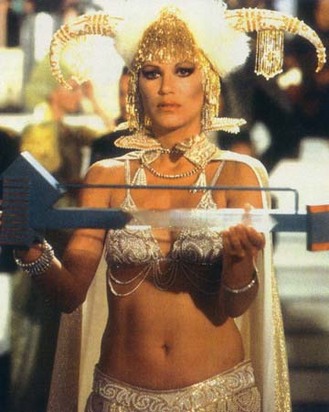 Despite her evil machinations, Ardala was powerful and not the slightest bit subservient to men. She was also one of the flashiest dressers in all of science fiction. For 1979, Ardala was positively revolutionary. Thirty years later, fans still wonder why Buck deflected the princess' overtures. 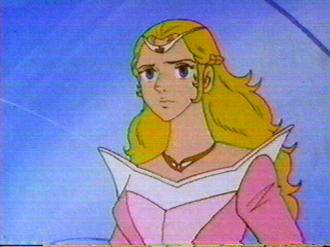 When she's not leader of the planet Arus, Princess Allura is a pilot for one of the five Robot Lions, ships that combine to form the mechanized warrior Voltron. Although she's spunky and determined, Allura is a character written in the early 1980s--retranslated from the Japanese TV show GoLion--so she winds up with dialogue like "Don't worry about me! Save yourselves!" But if you get beyond those words, you'll see that she takes her duty to her world very seriously and holds steadfast to the idea that Voltron be used for defense rather than attack. We would hope, if there ever were a modern retelling, that the princess who had no fear of climbing into the cockpit of a Robot Lion would finally get the nerve to kiss the handsome pilot, Keith. 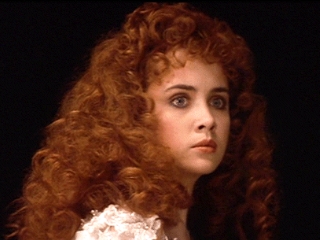 Give credit where credit is due: Lyssa decides to marry Prince Colwyn to cement an alliance, determined to build an army to fight the alien invaders. And when they do attack, she wants to stand by her husband. And ... that's it. Sure, the plot hinges on her: She gets kidnapped by an alien, so the prince and his ragtag army have to rescue her. But all she did was wait, until--and we're condensing a bit here--she can hand Colwyn a fireball and her son can rule the galaxy. You can choose to see it as a happy ending. We see it as Lyssa getting the short end of the scepter. 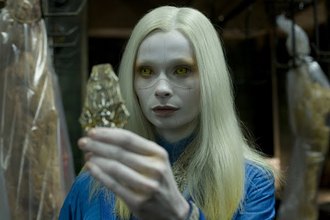 Nuala's time in the Hellboy universe was brief but memorable. The daughter of elfin king Balor, she upheld her father's vision of peace by fleeing from her murderous brother with a piece of a crown that could destroy humanity. (Another reason to flee: Her brother's affection made us want to shout, "Bad touching!") Bureau for Paranormal Research and Defense's amphibian member, Abe Sapien, was instantly smitten with the gentle, peace-loving princess. But rather than stay with Abe, Nuala instead chose to kill her brother through their magical connection--by killing herself first.

Dejah Thoris - A Princess of Mars 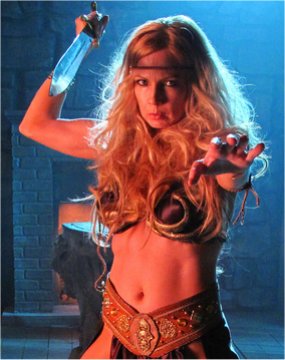 On the planet Mars, known to its inhabitants as Barsoom, water and breathable air are at a premium, and the princess, Dejah Thoris, knows her duty. She undertakes scientific expeditions "to rechart the air currents and to take atmospheric density tests." Held captive by the Tharks, she urges an alliance between the warring factions of Barsoom. She falls for the strong, agile Earthman, John Carter, but her pride is wounded when he refers to her as "his princess" yet does not actually propose. Later, thinking her beloved is dead, she promises to marry the son of her enemy to bring peace. In putting her people's needs before her own, Dejah is very much a princess. 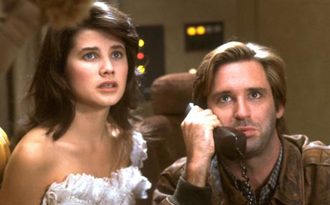 Spaceballs was Mel Brooks' take on Star Wars, and just like Princess Leia, Princess Vespa of the Druids easily speaks her mind. "Hey! I don't have to put up with this! I'm rich!" After she ran from an arranged marriage, she was taken prisoner by the evil Dark Helmet. Her father hired the handsome scoundrel Lone Starr to rescue her. It wouldn't be a comedy if it didn't contain Joan Rivers and the late John Candy. It also contained the reason Vespa really exists ... for the punchline about her Druid heritage. "Funny. She doesn't look Druish." 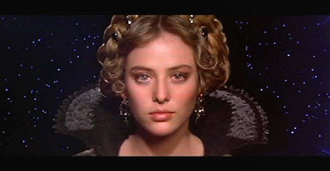 Princess Irulan was the daughter of one emperor and wife of another (Paul Atreides/Muad'Dib), and she trained for the position of Reverend Mother of the Bene Gesserit. Had this religious sect--famed manipulators of events short-term, long-term and really long term--actually existed, they would make us delete this paragraph just by using the power of their voice.

Irulan's birthright and abilities would have made her the most impressive character in any other book ... had she not come from the pages of Dune, where her talents can be summed up as "meh." And as for her relationship with her husband, the title of "wife" really belonged to his beloved concubine, Chani. But she eventually found her place in history by bearing witness to it; as snippets of her writings lead into each chapter, she actually winds up narrating the novel. 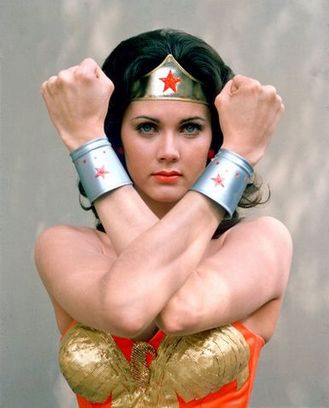 When most people think of Diana, Princess of Themyscira, they think of Wonder Woman, wielder of the golden Lasso of Truth and passenger in an invisible airplane. But after almost 70 years of publication, she's been so much more than that. An ambassador to the United Nations. An Air Force major. A cashier at Taco Whiz. It seems like the only thing she can't do is have a healthy, long-term relationship. (Although a flirtation with Batman has been hinted at, her relationship with Tom Tresser/Nemesis ended when he realized she just wanted a babydaddy.)

Interestingly, Wonder Woman's creator, William Moulton Marston, also invented the lie detector test, which gives the Lasso of Truth a kind of, well, veracity. But the lasso opened the door to other rope-related misadventures. 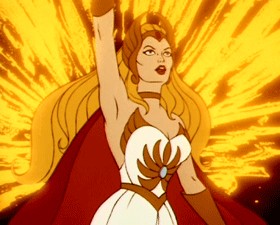 Adora was a princess of Eternia, but she never ruled there. Taken to another dimension as an infant by the Evil Horde, she was raised on Etheria without knowledge of her family and trained up as Force Captain of the Horde. It wasn't until her twin brother Adam arrived and gave her a sword, which transformed her into She-Ra, that she realized her heritage. After meeting her new family, she returned to Etheria to join a rebellion against the Horde.

Let's recap. Like Leia, she was separated at birth from her brother. Like Diana, her alter-ego as a warrior woman is even more awesome than her royal status. But unlike any other princess, she has a horse that turned into a sentient unicorn/Pegasus hybrid. She-Ra wins. 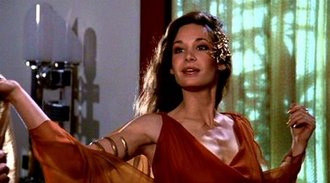 Not every princess gets a fairy-tale ending. In the case of Ice Pirates, Princess Karina didn't get a fairy-tale beginning or middle, either. Ice Pirates was one of science fiction's less interesting movies, and what was memorable was memorably bad. Think we're kidding? Two words: space herpes.

The characters were hunting for a source of water, the most valuable substance in the galaxy, and in the end, the planet they sought turned out to be (dramatic pause) Earth. Princess Karina showed some quick thinking by freeing two rogues, Jason and Roscoe, from castration and coercing them into helping her find her missing father. But her credibility as a strong leader disappears the moment she falls sobbing into Jason's arms. 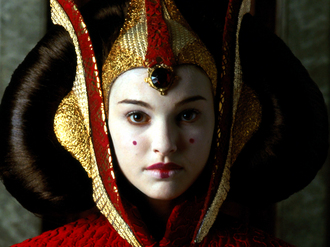 Although you didn't see this in the movies, Amidala started her royal career as Princess Amidala of Theed before become the elected (yes, elected) queen of Naboo. Despite her youth, Padme Amidala was exceedingly accomplished. She negotiated treaties, led armies and tossed chancellors out of the senate at an age when most of us were learning that the opposite sex wasn't so icky after all. Later, as Senator Amidala, she opposed the Military Creation Act, saying that diplomacy, not war, was the answer to conflict. She might have come to a better end, if only she hadn't made friends with that young kid from Tatooine....

Princess Nausicaä - Nausicaa of the Valley of the Wind 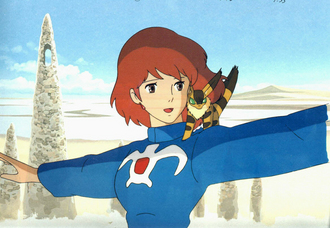 In Nausicaa of the Valley of the Wind, the Japanimation masterpiece by Hayao Miyazaki, humanity is scattered and separated by the Toxic Jungle and its deadly denizens, including the Ohmu. (The Ohmu are mindless killer insects--or are they?) When she's not effortless flying on her glider, Princess Nausicaa spends her days befriending animals and looking for the antidote for the toxins that infuse the world. Eventually conflict comes to the valley in the form of two armies who are trying to retrieve a missing artifact. Through courage and determination, as well as scientific curiosity, Nausicaa manages to unearth buried secrets (Really. It's beneath quicksand) and save the world. In this movie, there are threats and sacrifices at every turn, but because of this grittily determined princess, there's also tremendous compassion.

Plus, she looks great in a skirt.