The good ol' Star Wars franchise is all abuzz right now, so why not go all-out with a Halloween costume that would make both George Lucas and Mickey Mouse respect your awesomeness? Look no further, and say hello to the man-sized AT-ST.

Yes, one intrepid Star Wars fan has managed to build a 14-foot AT-ST costume, which essentially functions with the wearer below the outfit controlling it. The suit was modeled on a toy model of an AT-ST, then blown up to use as a costume.

Regardless, it's pretty awesome.

It apparently took Star Wars fan Scott Holden a full 10 months to put this thing together; it was essentially reverse-engineered from the toy model. The final suit was made of styrofoam, PVC pipe and corrugated plastic for strength and malleability. His full walk-through shows the meticulous detail necessary to get this thing just right.

Here is the costume in all its glory: 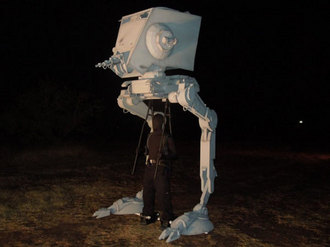 Check out the suit in action in the video below:

What do you think? Coolest costume ever?