As a kid, TV sitcoms provided me with a window into a universe of "normal." Like an alien receiving TV broadcasts from Earth, I often made sense of my world through their familiar plots—the stable families, the "major" problems that wrapped up in under 23 minutes, the absence of the oven-cleaner-fueled violence that permeated most modern households.

About once per series, though, these idyllic sitcoms decided to make an LSD-induced sci-fi episode in which all of the characters acted bizarre and things totally lost control of sanity.

Some shows, like The Flintstones and Family Matters, just spiraled into weird-ass mediocrity. However, lots of sitcoms managed to make one "black sheep" sci-fi episode, one that stuck in my mind despite repeated therapy sessions. I've prepared a nostalgic trip through some of TV's most out-of-character sitcom sci-fi freakouts, so hold on to your Xanax tightly.

In perhaps the most famous spinoff episode in history, Richie Cunningham gets a visitor from another planet (and time). This visitor is none other than Mork from Ork, who comes from a distant planet that has no feelings, but apparently has a hell of a lot of cocaine.

This episode messed me up because I saw it in syndication when I was already a fan of Mork & Mindy (because I was 4, and I loved uppers). The Mork from Mork & Mindy is a lovable alien who is kind and sensitive and never ever uses his body-freezing powers on Mindy when she bends over to pick something up. The Mork from the Happy Days episode is a blistering jerk who treats humans like specimens and actually thinks he can step to the Fonz.

The Cosby Show: "The Day the Spores Landed"

The Cosby Show broke down stereotypes and taught America that large groups of black people in New York are actually warm and approachable. Tuning in every week to enjoy the laughable antics of the upper-class Huxtables was a regular routine for family members of all ages.

Then Bill Cosby got pregnant and pulled a giant sandwich from his freaking urethra.

This was a particularly warm and fuzzy moment for the boys in my family. The older ones, including my dad, doubled over in pain at the scene, which includes a grown man pulling a toy sailboat out of his junk. The younger boys in my family were filled with dozens of gross-to-answer questions about childbirth. I'm fairly certain none of us have eaten a giant submarine sandwich since.

To fully understand why this is disturbing, first put yourself in the mindset of the average Gilligan's island fan. This is difficult, because it requires you to pretend you are really young and have such severely stunted mental development that you actually have the intelligence of someone who will not be born for several years. Also, you really like the goofy antics of Bob Denver (may he rest in peace).

Got there? Good. Now watch Gilligan's crew get rescued by a friendly doctor. This awesome feel-good moment is dashed when the doctor puts them on another island and starts swapping their brains around.

I thought for sure this would be the episode where Gilligan was finally diagnosed with Parkinson's syndrome due to being whapped in the head so many times.

The Dick Van Dyke Show: "It May Look Like a Walnut"

The Dick Van Dyke show had amazing punchlines and a dynamite cast. Every once in a while, the writers liked to throw in a sci-fi horror-based episode, probably just to scare me.

In perhaps the most allergenic use of this device, an entire episode is framed with a Dick Van Dyke dream about his thumbs getting kidnapped by walnuts. This utterly ruined the show for me, as it made his day-to-day anxieties seem meaningless. (Who cares if you fall over the dang ottoman, Dick? There are killer nuts lurking about!)

NewsRadio was known for its quirky plots and go-nowhere characters. However, in one episode everybody gets whacked at the end. Oh, and they're all using suspended-animation pods. Also, they are all in space. One more thing, they are in the future.

Did I mention everybody dies in the end except Bill and Matthew? This episode got increasingly traumatic as time passed, because Bill (Phil Hartman) really did die, and Matthew (Andy Dick) didn't.

This episode proved that other galaxies were out to get Al, and not just John Locke's girlfriend. Apparently aliens need foot sweat to power their ships, or something science-y. Al tries desperately to take a picture of them for something old-timers used to have called a "magazine." In a shocker, Al fails, gives the camera a pathetic "why me" look, then takes a shotgun up to the bell tower and starts wasting police officers [source needed]. 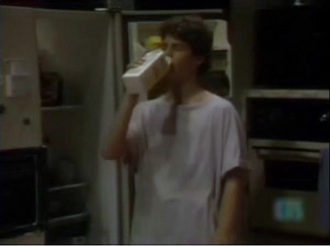 Growing Pains was a great view into the interpersonal issues dealt with by modern families. For instance, Mike had an Uncle Bob, whom we never see until Bob dies. Still, it's easy to identify with the mourning angst oldest brother Mike Seaver is experiencing.

Unable to sleep, he goes to the kitchen and starts drinking buttermilk straight from the container. That's already kind of weird, but the guy's in pain, leave him alone. Then, Mike's dead uncle runs through the living room, saying hi to Mike before dashing off to wherever dead old fogeys go. Every time I found myself gorging on something fatty, like buttermilk, I would instantly recall that traumatic Sixth Sense-esque scene from Growing Pains. In light of this, it's easy to understand how Tracy Gold developed an eating disorder.

[And while we can't embed this clip, you can find it here.]

This classic series found success by openly admitting that 90 percent of Americans are complete douchebags, then writing a show for them. In one of its most fondly remembered episodes, Elaine makes a bunch of friends that are polar opposites to the regular Seinfeld crew. Eventually, they figure out she's a total ass and give her the boot. Also, George finds a mysterious club populated by models, which suddenly vanishes as soon as he tries to show Jerry (who won't stop talking about how this is a unique show because "nothing happens").

Mad About You: "Up In Smoke"

In the 1990s, nothing told a man he was "whipped" more clearly than watching Mad About You with his spouse. Ever-quirky newlyweds Paul and Jamie would try to stay happy despite constantly needing to find ways to pay for their GIGANTIC New York City apartment.

Then there was this one episode ... Paul and Jamie travel back in time to find that the place where they met has burned down and that they've never really met. They wander around in their own spouse-less lives and pretty much just depress the crap out of everybody.

Wings was a popular show on NBC about two dopey brothers who tried to run an airline business while not indirectly giving each other STDs. In one particularly odd episode, they see a UFO and freak out the entire airport. This supports my theory about Wings, which was always that the brothers took too much mescaline and hallucinated the entire business.

Everybody's favorite rich jackass fights with John Glenn for a narration job. Left alone in the booth, Glenn rambles about the horrific stuff he's seen but was forced to cover up. Actually, this episode wasn't too traumatic, except for the trauma of realizing that this once-great show now consisted of some rambling old man who wasn't John Mahoney. 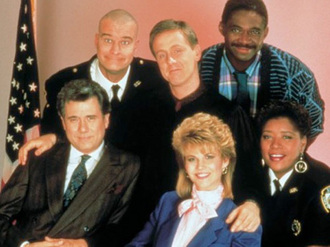 The series finale of this risky comedy starred some extraterrestrial visitors, who turn out to have come for Bull. I'm all for having guest stars in the final episode (Julia Roberts, anyone?), but the two Stooges-esque aliens bumbling around and claiming they needed help for being too short was a waste. Really, those lines could have gone to series regulars Markie Post and John Larroquette, who would've done a great job with them, seeing as how it was their last major gig, ever.

[Unfortunately, we couldn't find a clip from this episode, so you'll just have to imagine it.]

Malcolm in the Middle: "If Boys Were Girls"

For those who can't stop thinking about the sperm of Hal, the dad, this episode was a blessing. This eppy illustrates what would have happened had Hal shifted his load and had girls instead of boys. Throughout the entire episode, the level 12 harpy succubus also known as Malcolm's mom fantasizes about what it would be like with a bundle of girls.

Things start out fine but get creepier. First, Hal is revealed to be a chubby pushover who deals with his daughters' overly mature problems by eating. Then it turns out the eldest daughter is pregnant with some guy who may or may not be statutorily raping her. "Life is unfair," and not at all humorous, which is why I watch sitcoms in the first place, you downer-ass show.

This show was also known as Valerie, The Hogan Family and "some crap that came on after ALF." In a particularly non-Jason-Bateman-y episode, the completely ineffectual dad sees a UFO. Then the dad faces media hounds while utterly failing to emote with his facial muscles. The encounter, seen at 3:45, has special effects that rival the year 1951.

In this episode of the sassy doctor sitcom, the butterfly effect is applied. Two scenarios play themselves out sequentially. In the first, despite the efforts of all the smart-cracking doctors, a patient dies. But then a butterfly does something different and we are thrust into an alternate timeline. This time, the doctors do all the right things and the patient is treated properly and ... still dies. You'd think that at least some of this would salt the effeminately jubilant character played by Zach Braff. But no.

In this crossover episode, Lucille Ball is visited by none other than George Reeves as Superman. Only, a three-camera studio sitcom has a special-effects budget approximately equal to the number of casino chips an apology is worth in Las Vegas. So the writers were limited to putting Reeves on a balcony for his "exciting stunt." At least they had the good sense to douse Lucille Ball with water and make her cry while precariously perched on a skyscraper ledge.

For the latest sci-fi news, follow us on Twitter at @scifiwire
Tag: Superman
Close Search Return to SYFY homepage.