A lot's happened since AMC wrapped its first season of The Walking Dead, most notably that show runner, Frank Darabont, fired his entire writing staff only to be fired himself shortly thereafter.

It's not all bad news, though, and with the premiere of season 2 less than two weeks away, it's time we rounded up every piece of info we have on what's to come.

1. First things first. Surviving in Atlanta is hard—too hard, in fact, for Rick Grimes and co. which is why they'll be making an attempt to escape. That escape looks like it's going to set the stage for a lot of what's to come this season.

2. We'll be seeing the inside of a zombie, which promises to be one of the most gruesome scenes in the show to date. We're guessing the phrase "And I thought they smelled bad on the outside" will never be more appropriate.

3. Comic creator, Robert Kirkman, says we should think of the comic as a "road map" and that the show would continue to "dance in and out" of that narrative. 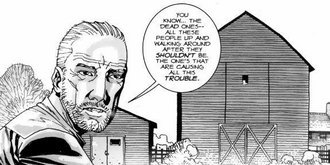 4. One of the most important settings in season two looks to be Hershel's farm.

5. We'll be getting introduced to a host of new characters including Hershel himself, his daughter Maggie, and Otis.

6. There will be at least one new character, Randal (played by Rescue Me's Michael Zegen), that has never appeared in the Walking Dead comic. All we know about him so far is that he is "a skinny, Southern kid who finds himself in a rather unique set of post-apocalypse circumstances."

7. Team Grime's arrival at Hershel's farm will apparently lead to such catastrophic events that actor, Andrew Lincoln (Rick Grimes), described what happens there as "Deliverance on acid."

8. Speaking of the farm, it looks like the show will follow suit with the comic, when Rick discovers a host of zombies hidden in Hershel's barn. It's unlikely that all our characters will survive that incident. 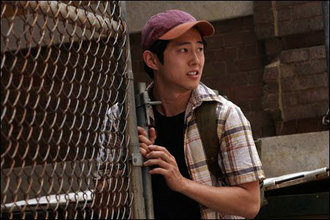 9. Fan favorite Glenn looks to be getting a little romantic story while on Hershel's farm with Maggie, which matches up with the events in the comic. We've heard that this will mark a major shift for Glenn from the man who lives to serve to someone who finally has something to live for himself. In the comic, he stays with Maggie and leaves the group behind. Might we be seeing that in the TV series as well?

10. The show isn't always the same as the comic. One of the more divisive figures created just for the TV series was racist extraordinaire, Merle Dixon (played by Michael Rooker). Last we saw Merle he'd been left for dead and handcuffed to the roof of a building as the undead climbed the steps to reach him. We knew he sawed off his own hand in an attempt to escape, but that's about it. In season 2, we'll be seeing him again.

11. There will be disappointments for some viewers. Not every character we want will definitely be showing up. Chances are slim to none that Morgan, the first man Rick meets when he awakens from his coma, will be coming back.

12. The Machiavellian Governor, one of the most popular villains from the comic will also be a no show this season.

13. On the plus side, we've heard rumblings that we'll finally get a glimpse of one of the most bad-ass women in the history of comics, Michonne, sometime this season. If you're not in the know, Michonne survives the zombie apocalypse by wielding a katana. She also leads around two chained zombies whose arms and jaws she's chopped off in order to scare off all the other zombies. Did we mention that her mutilated zombies in question were her boyfriend and his best friend? Yeah, we're pretty excited for her to show up.

14. The relationship between Rick and Shane will get more and more complicated. Actor Andrew Lincoln (Grimes), described the two as loving each other like brothers, but also said that they are "like Cain and Abel" sometimes.

15. Frank Darabont spoiled that we'll find out that Lori Grimes is pregnant. Whose that baby's daddy—Rick or Shane? 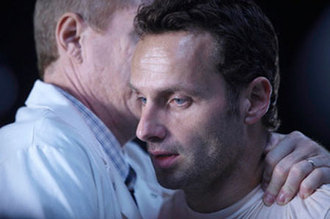 16. Finally, we've been promised an answer for one of the biggest questions of last season—just what did Dr. Jenner whisper in Rick's ear? Speculation has been all over the place, and while some people think this relates to Lori's pregnancy, it could just as easily be a reveal into the origin of the zombie apocalypse.