Making commercials is kind of like being that little kid on the playground who eats bugs: It's all about getting attention by any means necessary. Which is why it's okay for your company mascot to be a talking duck or a creepy king in a plastic mask. And also why TV ads are responsible for some of the freakiest abominations in sci-fi history.

This commercial answers the oft-pondered question "What do tequila-drinking robots do when their racistly depicted war buddy dies?" In previous decades, the answer might have been "Take down Nixon and his house of lies," but now it's just "Eat a fish burger and garlic fries."

"Let's kill these gringo bastards" is the dying human's war cry. In case you're wondering, this commercial was made for a place in Alabama, which is where Americans like to pin the blame for most of their perceived racism.

Martin Fine illustrates the quality of his product by running around in a spacesuit, shooting aliens. That's fine, but could we get a piece of furniture that doesn't have alien guts and Martin Fine shootings all over it?

Astronaut in bedroom with three female aliens ... okay, Martin Fine definitely stole this plot from the beginning of an X-rated film.

Trying to choose a handful of hits from the multitude of absurd Asian sci-fi-themed commercials is tough. Fortunately, the process was sped up by the fact that we don't speak any of those languages. Which is why we'll never understand why Robocop steals this poor family's refrigerator in this chicken commercial.

The aggressive manner through which Robocop pursues the fried chicken bears the implication that, if he doesn't get fried chicken, he'll eat everyone in the house.

There exists an entire industry devoted to confusing seniors into buying crap. Today it's called the "Military Channel." However, in the 1980s, media moguls figured that all they had to do to impress old people was show spaceships flying around the Statue of Liberty.

It's like if Planet of the Apes had a happy ending.

The message of this commercial is that the automation of banking is inherently troublesome. What better way to show the evils of technology than with a bunch of splashy special effects?

Also, in the future, "automation" means "a severed head floating in a jar."

This commercial describes a bleak future, one where science has utterly given up on curing the common cold.

Also in the future: Probably due to rampant abuse, Contac can only be dispensed by giant sentient robots.

This needlessly epic commercial tells of a city imprisoned in silence in "the 3rd Millennium." Fortunately, our heroes have a 1980s boom box to shatter the stillness.

Even more disturbing than this ridiculous plot is the end shot of two people eye-humping each other for no reason at all. 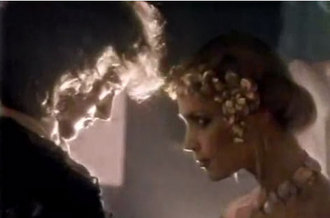 Maybe their point is that listening to boom boxes is like getting screwed in the mind.

Here, Schwarzenegger explodes out of a lady's head to sell everyone a drink. If this were alcohol, we'd buy it: After all, it makes your head explode.

Whenever they drink this, people remember Arnold's stern, bobbling head.

This creepy android shills a product made for human skin. We supposed this is for all the rebellious robots out there with a Buffalo Bill complex.

We didn't bother to translate, but the message seems to be "Buy our skin cream or robots will murder you while you sleep."

This bizarre commercial features a room full of newborn baby monkeys with iPad screens for heads. So, we suppose, the parents are a monkey and a robot?

That is an enormous number of monkey robot newborn babies. You really have to be careful with those, because every time they wet themselves they risk shorting out.

Miro Media Tries To Sell ... Something

Remember the days when we thought the Internet was going somewhere? Before we realized it was just another novelty, like CB radio? Advertisers initially had a lot of trouble explaining "the Internet" to new consumers, as evidenced by how confusing this 5-minute commercial is.

This is how the Internet was perceived in the early 1990s. Pretty much exactly like we picture SkyNet.

The Future of All Sport

This ad portrays the future of football, where only All Sport energy drink can prevent players from dehydrating and (we assume) shriveling up like a raisin. This commercial has the added bonus of being written by someone who knows nothing about football. Or, frankly, anything else. 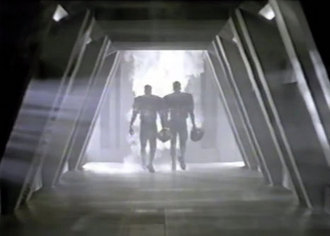 The Future Requires a Modern Deodorant

Here, a guy gets repeatedly confronted by angry robots on his way to work, yet doesn't manage to sweat a bunch of stank. Because everyone who's read Fahrenheit 451 knows that that's how the angry robots detect you in the first place.

Vicious, killer robot dogs are the worst. Why do they keeping making them?

Using the INSANE computing power of a computer, Gilette designs that little lubricating strip on its razors. Why they don't use this technology to make an electric razor that actually works is beyond us.

They should totally make a laser razor. Not just because it rhymes, but also because it uses lasers, which are awesome.

In the distant future of the year 2001, we will be ruled by a giant talking head broadcasting from our walls. That talking head will apparently be Ray Bradbury, and he's gonna complain about prunes angrily. The target audience is obviously "old, dorky people."

Also, Ray Bradbury hasn't aged a bit in the past 40 years. Impressive!

Kids are playing baseball on the moon, or something, and working up a thirst. Kool-Aid Man comes bursting through the wall at the mere mention of "hot kids." Then, strangely, the commercial forgets all pretense of being set in outer space.

"We need to tell people about this new electric razor."

"Yeah, it fuses technology with human sensitivity. What would symbolize that best?"

"I got it! A robot and a naked man engaged in sensual foreplay!"

Also, whoever in the ad industry thought it was right to associate sharp, spinning metal blades with sex is a moron.

Chosen One of the Day: The glistening, epic handshake from Predator (1987)
WTF Moments: Terminator 2's phone booth scene still makes us choke on our milk