1st look at Evans and Atwell on the Captain America set

Not too long ago, we brought you a first look at Captain America's costume (though it was a stuntman sporting it and not Chris Evans). Today we have a first peek at Hayley Atwell as Peggy Carter, Steve Rogers' first love interest, and at the main man himself, Chris Evans.

Some of the pictures were taken by photographer Barry John from the Captain America set in Manchester, England, where the movie is currently being filmed. The actress is sporting a World War II U.S. military uniform, and she's aiming a gun at a getaway car, all dolled up, as they say, in her 1940s look.

This Week in Genre History: It's no surprise people didn't see Sunshine's brilliance
Inside 'America's Ass': How that Captain America joke in Avengers: Endgame happened

In another set of pictures, these one from Celebrity-Gossip.net, we have a much clearer look at Atwell and at a rather beefed-up Evans as Steve Rogers. There's also another clip from the filming.

In more (possibly) awesome news—it appears that Richard Armitage, who played the villain Guy of Gisborne on the BBC's Robin Hood, has been cast as Heinz Kruger (a Nazi spy and Captain America's first foe) in the movie and that the actor is on set today to film scenes along with both Atwell and Evans. (If hobbsy's tweet below can be trusted, that is.) 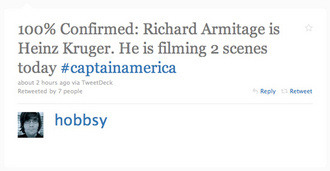