For months, Arrow stars and producers have been teasing the Count. He's a new villain who makes his debut later this month. The character will be played by Fringe alum Seth Gabel (Agent Lincoln Lee), and we've got the first look at him in action.

The Count is small-screen adaptation of the DC Comics character Count Vertigo. As you may expect, Gabel's version is drastically different from the original. His name is simply the Count, and he's a big-time drug dealer in Starling City. His product, conveniently called "Vertigo," lands in Thea's hands, making Oliver furious.

"What gets Oliver into the Count's orbit and puts the two of them in conflict is actually a really personal motivation," says executive producer Marc Guggenheim. "Someone close to him is actually hurt by the Count. This is the first time the Arrow goes after someone purely out of revenge. There's argument to be made that the Arrow's general mission is one of vengeance, but this is very specific. This time, it's personal."

At the end of the day, the Count's a business man with a "sociopathic streak." Either way, judging by these photos he looks a little too emo for our taste. But what do you think? 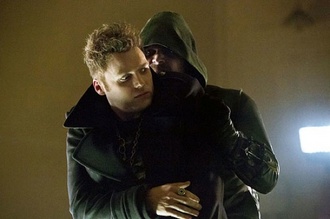 Gabel debuts in the Jan. 30 episode of Arrow, titled "Vertigo."