Work on Thor: The Dark World might still be ongoing, but that doesn't mean we can't check out a sweet (technically official) poster for the latest Marvel flick. Want to see Thor strike his iconic pose, 2.0?

No, it's not the first true promo poster for the sequel, but it is the cast-and-crew special edition put together by artist Olly Moss at the request of the production.

Moss is still putting the finishing touches on what will be one of the coolest pieces of Marvel memorabilia in the coming years, but he tweeted a teaser to give us all a look at what he's working on.

Take a look at his working draft below. 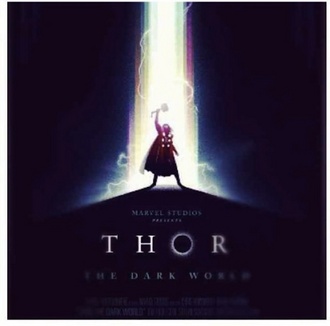 In the meantime, here's the sequel's official synopsis:

Marvel's "Thor: The Dark World" continues the big-screen adventures of Thor, the Mighty Avenger, as he battles to save Earth and all the Nine Realms from a shadowy enemy that predates the universe itself. In the aftermath of Marvel's "Thor" and "Marvel's The Avengers," Thor fights to restore order across the cosmos...but an ancient race led by the vengeful Malekith returns to plunge the universe back into darkness. Faced with an enemy that even Odin and Asgard cannot withstand, Thor must embark on his most perilous and personal journey yet, one that will reunite him with Jane Foster and force him to sacrifice everything to save us all.

What do you think of Moss' poster? Will you be hunting for one of these bad boys on eBay in the coming months?