We've been waiting a long time for this, but we're finally getting to see the very first official pic of David Tennant—in character as Peter Vincent—from the upcoming Fright Night remake. And he looks jaw-droppingly awesome.

Yeah, we've already seen what Tennant looks like as Vincent, a Vegas magician who's specialized in horror-themed tricks, a couple of months back in this banner.

But it's still jarring and strange to see the former 10th Doctor look like a Criss Angel clone, rocking some very tight-fitting leather clothes (with a barely covered midriff), with long dark hair and a goatee. And we like it.

There's absolutely nothing of Doctor Who to see here, don't you think? 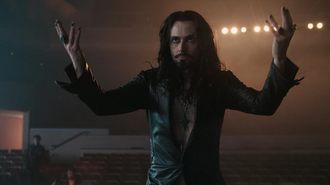