The first real pic from the upcoming sci-fi flick Ender's Game has finally been revealed, showing stars Harrison Ford and Asa Butterfield in the futuristic Battle School. Want to see?

Based on Orson Scott Card's acclaimed 1985 novel, Ender's Game is about a group of young boys earning their stripes as soldiers-in-training. Ford plays Col. Graff, while young Butterfield steps into the title role of Ender.

10 awesome sci-fi winter movies you must see (plus 2 you should avoid)
So now that they're casting Ender's Game, who should be hired?

The pic finally gives us a good look at the Battle School, and it'll be amazing to finally see the setting brought to life on the big screen. The studio has managed to keep a tight lid on production, so this is about the only inkling we have at the moment of the film's visual style.

To go along with the pic, director Gavin Hood (X-Men Origins: Wolverine) spoke with Entertainment Weekly to assure fans that the story being told (and that stark ending) would remain true to the book:

"I am a fan and I have had a desire to do this and have been working on this now for nearly four years. That ending -- and the complex moral questions that it raises -- is one of the reasons why I love the book. I promise you that it is very much there."

Click below to check out a larger version of the shot: 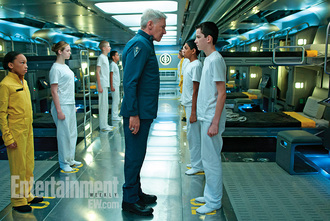 What do you think of the pic? Do Ford and Butterfield look the part?