It's Christmas! Why? Because we just got our first, exciting look at Doctor Who's upcoming seventh season in a brand-new preview video: Geronimo! (And spoilers!)

Hot on the heels of the new companion announcement and a first official promotional pic of Jenna-Louise Coleman, the BBC and BBC America have released a first preview trailer that not only has a lot of that Wild West stuff we saw in previous pics, but also has a lot of other cool stuff we haven't seen before.

The new preview trailer has a whole lot of running and a whole lotta shooting that has our beloved Doctor (the indefatigable Matt Smith)—who seems to be as mad as ever, bless him—and the returning and soon to-be-departing Ponds Amy (Karen Gillan) and Rory (Arthur Darville), smack down the middle of what looks to be a shooting worthy of the O.K. Corral ... kinda.

There's also a Westworld-like evil robot, an Egyptian queen (is it us, or does she look suspiciously like Nefertiti?), Rory's dad (played by Harry Potter's Mark Williams), lots of snow and a peek at the bone-chilling eyestalk of one of our Time Lord's oldest mortal enemies.

And the bestest, most awesomest of all—yeah, we said bestest and awesomest, because that's what it is—and we mean besides all that glorious, brilliant, exciting trailer you're about to see? Well, you'll have to take a look:

Yep! We finally get our very first look at Farscape and Stargate-SG1's Ben Browder as a—we called it—lawman! 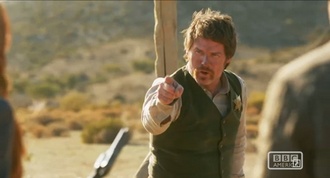 What do you think of this preview trailer? Did it manage to whet your appetite?