Ever since Charlize Theron revealed that she was shaving her head for her role in Mad Max: Fury Road, fans have been wondering exactly how she would look. Well, now we have our first glimpse.

Theron was spotted in the African country of Namibia, where the movie is due to start filming this month, and was snapped in her full shaven-headed glory, holding her adopted son. Although there have been pics of Theron with a hat on, the Hollywood Reporter says this is the first time we've had a chance to see the dramatic new look she's taken on for the movie.

New 'The Old Guard' in the works, as Charlize Theron confirms Netflix sequel will start filming next year
Full trailer for The Addams Family reveals Snoop Dogg as the hairy Cousin Itt

Theron made headlines when she chopped off her hair to play a character named Furiosa opposite Tom Hardy, who's taking over for Mel Gibson for the fourth film in the series. The film has been in the works for years with director George Miller, who created Max and directed the first three entries (1979's Mad Max, 1981's The Road Warrior and 1985's Mad Max Beyond Thunderdome).

Theron recently told the press, "I feel like the original Mad Max created such a vivid world, that to go back and re-imagine it and kind of replay in that sandbox sounds like fun to me. George Miller really created a strong female character that I've never read anything like this. I mean, I'm scared s---less!"

As the Reporter points out, Theron joins a list of several actresses who have gone bald for movie roles, including Sigourney Weaver in Alien 3 and Natalie Portman in V for Vendetta (and let's not forget the late Persis Khambatta in Star Trek: The Motion Picture).

Does Theron shaving her head make her more of a badass in your mind, or will the sight of this blond beauty with no hair be too distracting? 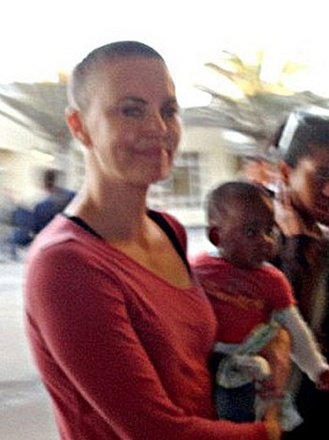