The first images of Hugo Weaving's Red Skull character from the upcoming movie Captain America: The First Avenger are online—along with a pic of one of the most famous weapons in comics.

First up is this image of Weaving as Johan Schmidt, aka the Red Skull, holding the Cosmic Cube, also called the Tesseract, which will apparently play a key role in the movie. The pic's not very clear, unfortunately, but you can click on it to have a better look. 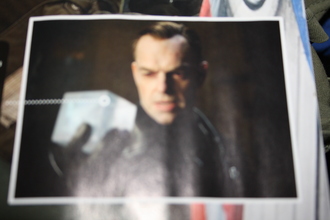 Next come two rather neat concept images for Red Skull in his super-slick Nazi costume (we don't know about you, but it screamed Cobra Commander from G.I. Joe for a split second there), holding that same Cosmic Cube.

They're pretty similar to the earlier concept images we've seen of both Captain America and Thor, so we have a good feeling that these are legit. However, whether this is what the always-awesome Hugo Weaving will wear in the movie remains to be seen.

So what do you think—do you like what you see?