Aside from some scattered set pics, director George Miller has managed to keep his Mad Max sequel Fury Road shrouded in secrecy. Now, thanks to a promo photo leak, we finally have our first look at Tom Hardy as the new Mad Max.

The Dark Knight Rises star takes over for Mel Gibson, who played the post-apocalyptic road warrior in the 1979 original and two sequels in the 1980s. Our first shot of Hardy in costume seems to come via an autographed still from the film that surfaced on Twitter, showing Hardy in a barren landscape channeling a lot of that early Mad Max attitude.

Here's the insane plot description, that picks up the post-apocalyptic tale all these years later:

"Mad Max is caught up with a group of people fleeing across the Wasteland in a War Rig driven by the Imperator Furiosa. This movie is an account of the Road War which follows. It is based on the Word Burgers of the History Men and eyewitness accounts of those who survived." 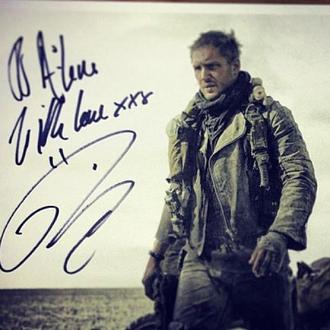