After months of waiting, we're finally getting our very first look at Pushing Daisies actor Lee Pace as the Elvenking Thranduil (aka Legolas' dad) in Peter Jackson's The Hobbit. All we can say is, like, WOW.

We've been fans of actor Lee Pace ever since his lovable turn as Ned the Pie Maker on the wonderful (and dearly lamented) Pushing Daisies.

So when the actor was cast as Legolas' (Orlando Bloom) dad, the Elven King Thranduil, in Peter Jackson's The Hobbit, we were psyched!

The reveal comes from a The One Ring.net board member named Bexlim who sent in some scans from The Hobbit: An Unexpected Journey Annual 2013, one of several Hobbit movie tie-in books that are scheduled for release this year.

We also have our very first image of the White Council with Saruman the White (Christopher Lee), Gandalf the Grey (Sir Ian McKellen), Galadriel (the ever-beautiful Cate Blanchett) and Elrond (Hugo Weaving) in an apparently much-talked-about scene about a discussion surrounding a certain Wraith's blade. 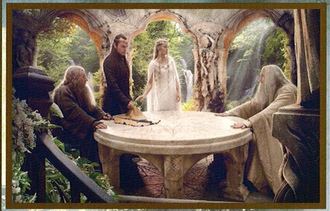 Before we get on to Thranduil, we wanted to add J.R.R. Tolkien's The Hobbit book description of the mighty Elvenking of the Mirkwood wood elves, courtesy of TheOneRing:

"On his head was a crown of berries and red leaves, for the autumn was come again. In the spring he wore a crown of woodland flowers. In his hand he held a carven staff of oak."

(Click! to view this in all its high-res glory) 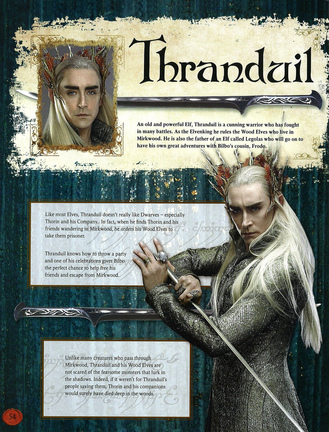 Pretty awesome, don't you think? We really like the overall look of the actor, even though it doesn't exactly fit Tolkien's book description. But then again, Pace's Thranduil fits in pretty nicely with Peter Jackson's The Lord of the Rings and The Hobbit world. How about you? Do you like Pace's look as the ''old and powerful Elf'' Thranduil?