Batman's back in 1st tense clip from The Dark Knight Returns

The first footage from the new animated adaptation of Frank Miller's Batman: The Dark Knight Returns has been released, and even a few of Gotham's finest are glad to see that the Caped Crusader is back on the case.

This definitely looks like a faithful adaptation, and as you can see from the screenshot above, it even features Miller's iconic cover in action. The scene in question appears to show one of Batman's first cases since retirement.

The animated film is part one of DC's two-part adaptation of Miller's run, and it's scheduled to hit DVD and Blu-ray on Sept. 25. 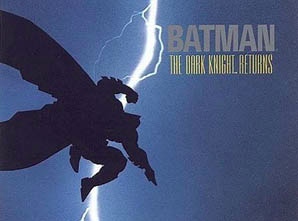 For the rundown, here's the official synopsis:

It's been a decade since Bruce Wayne hung up his cape, following most of the other superheroes who had been forced into retirement. Facing the downside of middle age, a restless Bruce Wayne pacifies his frustration with race cars and liquor - but the bat still beckons as he watches his city fall prey to gangs of barbaric criminals known as The Mutants.

The voice cast is headlined by RoboCop himself, Peter Weller as Batman, with David Selby as Commissioner Gordon, Ariel Winter as Robin, Wade Williams as Two-Face and Michael McKean as Dr. Bartholomew Wolper.

Check out the first clip below:

What do you think about the look so far? Will you be checking this one out next month?