2 Walking Dead actors spill their guts about those heartbreaking deaths

If you saw Sunday's episode of The Walking Dead, you know that there were shocking, heartbreaking, wrenching deaths of two major characters, and the AMC show is never going to be the same. So what do the actors whose characters died think about the development? Read on.

WIRE Buzz: Crossbones back for What If...?; Walking Dead S10 teases bonus episodes; 'Crater' on Disney+
Chandler Riggs' father makes it clear his son did not want out of The Walking Dead

In the episode, "Say the Word," the prison inmate that Rick had locked in with Walkers to die got revenge when he guided Walkers into the prison and split up the group. In the end, T-Dog (IronE Singleton) died heroically offering himself up as Walker food to save Carol, and Lori (Sarah Wayne Callies) went into labor with only Maggie and Carl to help. When things go horribly wrong with the delivery, Lori convinces Maggie to cut out the baby, and Lori's son, Carl (Chandler Riggs), is forced to put his own mother down with a bullet to the head before she turns into a Walker.

"Lori's death is very unique, I think, among the one's we've had on The Walking Dead, because it's one that she's chosen," said actress Sarah Wayne Callies, who played Lori. "So it's an interesting tone, because it's not surrounded by quite the same level of crisis and panic, although she's clearly in a situation where things are going to go badly with or without her choice."

In The Walking Dead comic book series by Robert Kirkman, Lori is shot dead by the Governor while holding the baby. So the fact that Lori died is not a surprise to fans of the comics. However, the way Lori dies without ever meeting the Governor, and the fact that the baby survives, are a whole different story.

As for Callies, she has said in the past that she felt Lori had to die. 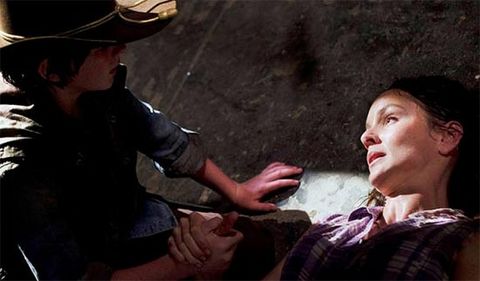 "Frank [Darabont] and I talked a lot about the necessity of Lori dying, and he fought me on it. He said he thought he had a way around it. We never got a chance to see how that would work out," said Callies. Darabont created the series for AMC, but no longer works on the show.

"Glen [Mazzara] and I talked about it a lot, not just what that scene would be like, but how we owned that moment through the first two episodes of the season, because originally there was a different timeline and we had longer to build to that moment. And so when it got shortened we talked about what we needed, what pieces had to be in place both for Lori and Carl and for Rick, for his development later in this season," said Callies.

"And it is an intimate process, because Glen lost his mother shortly before we started writing this season. So I was very aware that this was a scene that he had written about a woman saying goodbye to her son, having just said goodbye to his mother and heard many of those words. We worked the actual script. We batted ideas and lines back and forth for about two weeks, and what we shot was a combination of those efforts," she said.

"There were a couple of things that I said that weren't on the page, but were a product of sitting with Chandler in a room and trying to say goodbye to him. And, you know, it's just a great gift of a scene to me as an actor. Not that it's all about me, but I'm an actor. So it's all about me, right?

"The great gist of that scene to me was that I got to say everything I wanted to say to him and to the show and to the cast. And, you know, people ask me, 'How does it feel to leave the show?' And I just want to say, 'Well, watch the episode.' You'll know exactly how I feel, because it's all there. And for many of the other deaths that have come and that will come who don't have that opportunity," said Callies.

"There were some very specific things that mattered to me to find with Lori in the third season, and redemption was a big part of that. A sense of redemption in her marriage, and a sense of redemption with Carl. And while I don't think either of those were achieved completely, because that would tie things up in a package that is far too neat for our show ... we took steps down that path in a way that I think not only dramatically changes the show, but in a way that I'm grateful too personally because I have such profound affection for Lori."

When it comes to IronE Singleton, who played T-Dog, he calls watching the final episode "bittersweet." 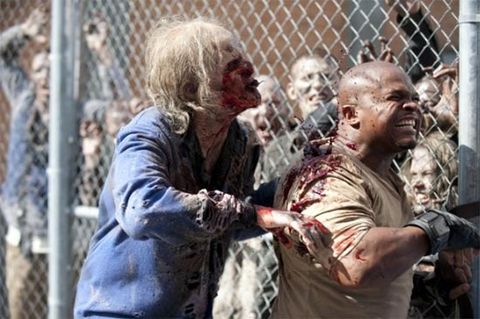 "I am totally and completely satisfied with how the show ran. I think that the show was a success of a brilliant team of individuals, everybody coming together doing their part. ... It's not my call to really say that I wanted more or less or anything like that. I'm just so pleased to have been part of something so special, so historical," said Singleton in a conference call with journalists.

"I had no idea I was going to go out so heroically, at the beginning, because when I was first cast in the show I was told that I would do two, maybe three episodes. But I ended up staying on the show for three seasons. So how miraculous is that? So I'm very thankful for that," he said.

"And when I get the phone call, the death call, I call it ... They told me I was going to die and I was looking forward to reading the script. When I read it I was thankful that he would go out heroically. So it made me feel really appreciated," said Singleton.

While Lori was drawn from the comics, T-Dog was a creation for the Walking Dead TV series.

"So whatever you do, whatever you come up with, whatever you decide on, we can go with it, and if the director or if the execs like it, then you'll stick with it. So that's a good thing, as opposed to having something that's already written, that's paired down with who your character is. Then you're kind of sticking in a sense, to a certain extent," said Singleton.

What we didn't see was T-Dog getting a chance to have a run-in with racist Merle, who has returned this season. "So maybe Merle can have that encounter with T-Dog's zombie. You just never know, and that would've been special," he said.

The Walking Dead airs on Sunday nights at 9 p.m. on AMC.

What do you think about Lori's death? What about T-Dog's?