23 of the world's geekiest sci-fi and fantasy statues

Detroit may soon be getting a statue of Robocop after a successful Kickstarter campaign—but there are ALREADY plenty of other sci-fi and fantasy characters immortalized in public spaces around the world.

Check out 23 of the geekiest below. 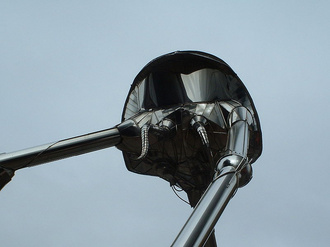 Standing 23 feet tall, this tripod from H.G. Wells' War of the Worlds was installed by Michael Condron in 1998 in Woking, England, along with a fallen capsule that brought it to Earth. Why Woking? It's the town in England near where the aliens in H.G. Wells' book first land.

War of the Worlds Memorial 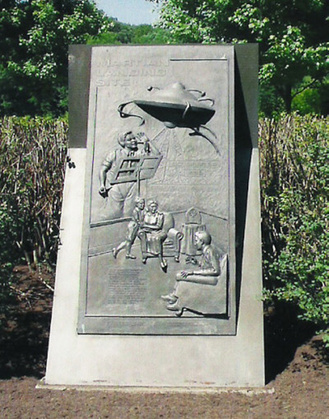 Woking isn't the only place to commemorate H.G. Wells' story. Grover's Mill, N.J., is another landing point for the aliens, not from the novel, but from the 1938 radio broadcast that sent America into a panic. This monument, installed in 1988, depicts Orson Welles and the tripods. 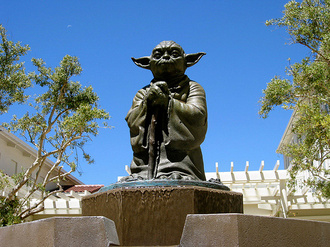 Easily one of the most iconic characters from the Star Wars franchise, Yoda is enshrined as part of a fountain at the Letterman Digital Arts Center in Presidio, San Francisco, home to Industrial Light & Magic, LucasArts and other components of Lucasfilm Limited. He even has his own 4square check-in site. 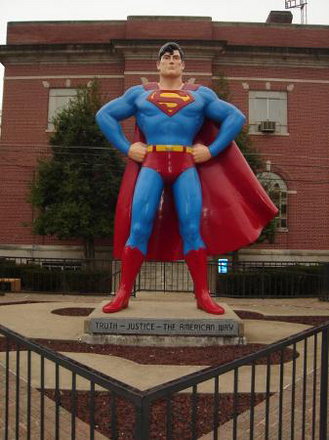 Metropolis is the home of Superman, so it makes sense that Metropolis, Ill., has capitalized on the legacy of the character. In addition to a number of local businesses referencing the Man of Steel, a statue was put up in 1986 in the town square. Unfortunately, this version was shot by vandals (presumably to test its strength), and in 1993 a new 15-foot statue (this time made of bronze) replaced it. Across the street? The Super Museum. 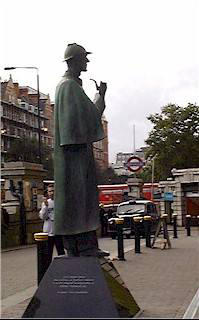 Baker Street in London is famous for the residence of a Mr. Sherlock Holmes in Sir Arthur Conan Doyle's books, so it comes as no surprise that a statue of the famous detective can be found on the street. Located just outside the Baker Street station, the statue stands 9 feet tall and was installed in September 1999. 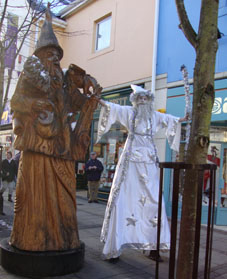 The legendary wizard Merlin gets statue treatment in Carmarthen's shopping center in the aptly named Merlin Way. Carved out of wood by local woodcarver Simon Hedger, Merlin stands at 11 feet among shoppers in Wales' oldest town. 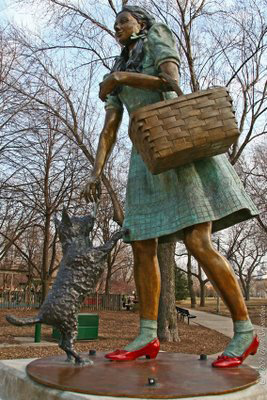 Located in Oz Park, Dorothy and Toto, the Cowardly Lion, the Scarecrow and the Tin Man all have their places along with a yellow brick path in Lincoln Park, Ill. 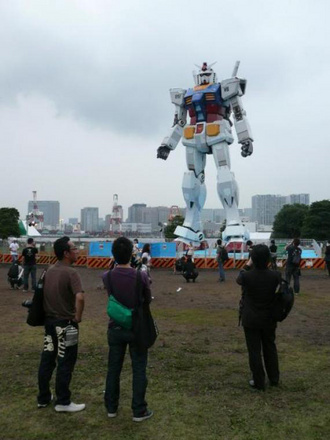 This giant statue of a Gundam made headlines in 2009 for the 20th anniversary of the series. Towering over tourists at 20 meters, the robot was open to the public from July through August, and while it's considered a temporary fixture, there have been calls for it to be made a permanent attraction. 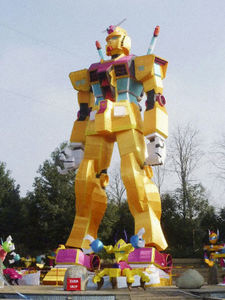 In what's been called a knockoff of the Japanese Gundam statue, China has constructed a statue of its own. Located in an amusement park in Chengdu, Sichuan Province, this statue caused a bit of controversy, as it's been accused of violating copyright statutes by Sotsu Company, the organization that maintains the Gundam franchise. 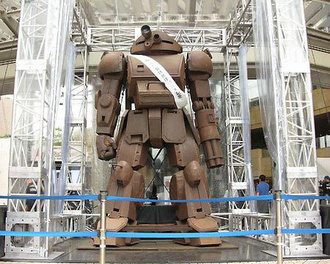 Another anime character has been re-created as a 4-meter statue in Japan. This trooper from the Armored Trooper VOTOMS TV series was created for the 150th anniversary of the Japanese Iron and Steel Federation. 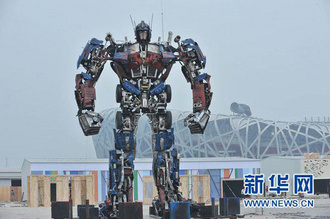 While we're looking at giant robots based on cartoons, no list would be complete without mentioning Transformers. This 10-meter-tall sculpture was built in the Bejing Olympic Park in July 2010, just north of the Bird's Nest, out of scrap metal and waste materials. 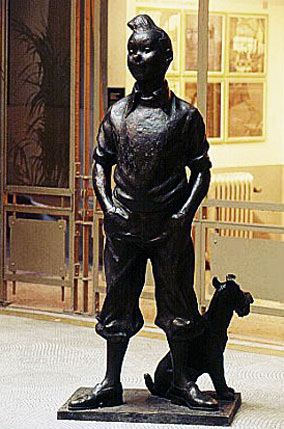 The boy reporter of Herge's famous comic series Tintin and his dog Snowy can be found in statue form in Brussels, Belgium. Made of bronze, Tintin stands inside the Art and Cultural center, and was created by sculptor Nat Neujean for the 30th anniversary of the comic strip. The statue was commissioned in 1976 and located in Wolvendael Park, but was moved to the cultural center in the 1990s because of vandalism. 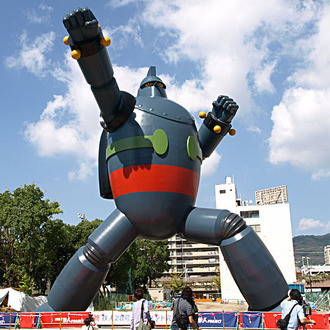 This large statue of Gigantor is located in Kobe's Wakamatsu Park, where it towers over visitors at 60 feet in height. Completed in 2009, the sculpture honors the character's creator, Mitsuteru Yokoyama. 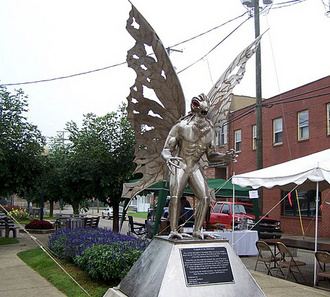 Between 1966 and 1967, West Virginia was terrorized by something that's come to be known as the Mothman. The creature hasn't been seen since the '60s, but capitalizing on its notoriety, the town of Point Pleasant erected a statue of the Mothman in 2002, and in 2003 the park that the statue calls home was renamed Mothman Park. 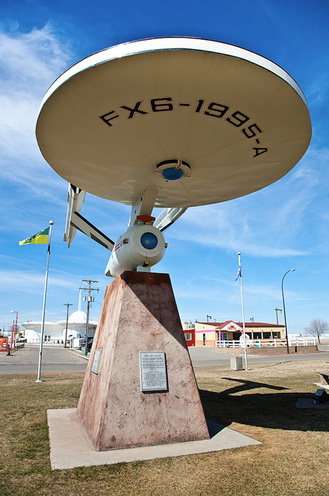 Who doesn't know the legacy of the Enterprise? The people of Vulcan, keenly aware of the connection of their town's name and the franchise, put up the sculpture to attract tourists. In addition to other attractions, and a local Star Trek convention, it pulls in fans from all over the world. 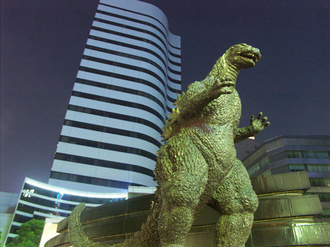 Of course, there's a statue of Godzilla in Japan. Specifically, this statue resides in Chiyoda, Japan. Buried between towers, this statue commemorating the legendary character isn't all that large, but is rather diminutive. Ironic! 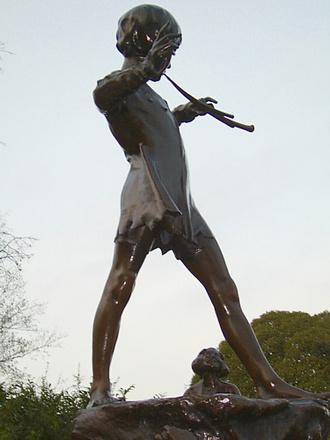 Located in Kensington Gardens in London, this Peter Pan statue was commissioned by J.M. Barrie, the man who created the character. Put up in 1912 by sculptor Sir George Frampton, there was no permission or approval for the statue: It appeared overnight, as if by magic. The statue has been copied, and several other versions exist around the world, in Brussels, Belgium; Newfoundland, Canada; Perth, Australia; Liverpool, England; Toronto, Canada and Camden, N.J.

Godzilla vs. Kong has no post-credits scene for two very good reasons
Where to watch every Godzilla movie ever made 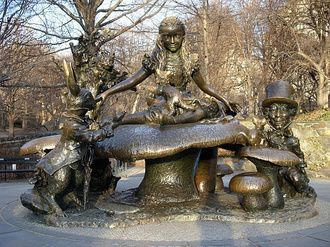 Lewis Carroll's creation of Alice, the Mad Hatter and the White Rabbit has been given sculpture treatment in New York City's Central Park. Based on the original book's illustrations by John Tenniel, the statue was built by José de Creeft in 1959, commissioned by George Delacorte. 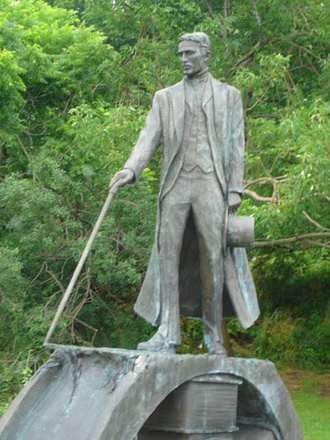 The famed scientist Nikola Tesla has been immortalized not only by his contributions to science, but also in two statues at Niagara Falls. One notable sculpture resides in Queen Victoria Park in Canada, constructed in 2006 by sculptor Les Dryzdale. Here, Tesla stands on one of his most famous inventions: the AC motor. Another Niagara Falls statue stands just short of the border in New York, a gift from Yugoslavia in 1976, the work of sculptor Frane Krsinic. 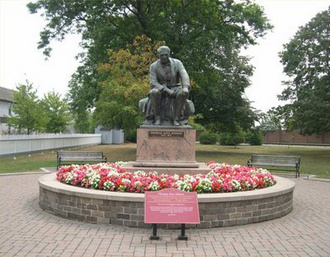 Nikola Tesla's bitter rival Thomas Edison has also been honored with a statue. Commissioned in 1948 by none other than Henry Ford for his own hometown, Greenfield Village, Mich., this bronze statue was sculpted by James Earl Fraser. 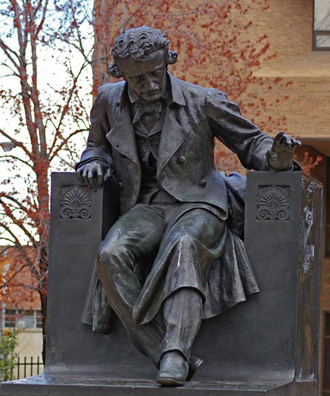 One of America's most famous speculative fiction writers can still be found in statue form: Edgar Allan Poe's statue was raised in 1921 in Wyman Park in Baltimore, but was taken down and moved in 1983 to the University of Baltimore. Sculpted by Sir Moses Jacob Ezekiel, the statue can sometimes be found with a flower in its lapel or a balloon tied to its hand. 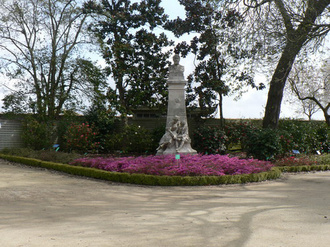 Two statues of Jules Verne can be found in France. The first is in Nantes, the birthplace of the writer responsible for 20,000 Leagues Under the Sea and From the Earth to the Moon, set up in 1910. The statue was designed by George Bareau. A second statue is located in Amiens, designed by Albert-Dominique Roze and installed the year before the Nantes statue. 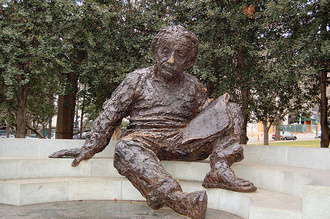 A statue of famed scientist Albert Einstein graces the grounds of the National Academy of Sciences in Washington D.C., just off of Constitution Avenue. Unveiled in 1979, the statue was sculpted by Robert Berks to honor the centennial of Einstein's birth. The papers in Einstein's hand highlight three of his most important theories: the photoelectric effect, the theory of general relativity and the equivalence of energy and matter.

What, and where, are your favorite geeky statues? And what characters should be immortalized as statues?