What ABC's Eastwick isn't, and what it is, sort of

ABC's upcoming supernatural romantic comedy series Eastwick may be a lot of things, but stars Sara Rue and Lindsay Price want to make sure you know that there are several things it's not.

Don't call it Charmed 2. Don't call it Desperate Housewives with magic. And don't call it a pale imitation of John Updike's original book, The Witches of Eastwick, or the hit 1987 movie adaptation that starred Jack Nicholson, Cher, Susan Sarandon and Michelle Pfeiffer. (Not even if the TV show also features Veronica Cartwright, playing a different character from the one she played in the movie.)

"Expectations are always, it's almost a sure-fire way of being disappointed, and that's why this situation is tricky," Price told a group of reporters visiting the show's Burbank, Calif., set on Monday. "It's like, you know, that's why some people get bummed out on their birthday, because they expect everyone to make a big deal, but I probably shouldn't tell you that I get bummed out on my birthday."

Price added: "But the great news is that what it was in the book and the movie was strong and interesting enough in story to carry on to a new story. These are completely different women, and we're not playing the same characters. The town is the same."

(The town is really the backlot of the Warner Brothers studio in Burbank, which may be familiar to viewers of Gilmore Girls—it was also Stars Hollow—and in Terminator: The Sarah Connor Chronicles, the new Eastwick Inn used to be the Connors' house. Click on the images below for larger versions.)

In the seaside village of Eastwick, three very different women are about to discover some bewitching talents they never knew they had. Roxie is the extrovert artist, Kat the overworked wife and mom, and Joanna the wallflower local reporter. When the mysterious Darryl Van Horne arrives in town, he helps them discover their unique powers in ways they never could have imagined.

It's not the movie or the book: "I didn't want to watch the movie before I got involved, because I didn't want to have that shadow hanging over me," Price said. "But I remember this movie so well it was hard not to think about it. It's hard not to think about it now, too. We're derivative, obviously, of that movie and also the novel, and I think, in all the good ways, we are. Maggie [Friedman, creator/executive producer] says it's a wink and a nod to both of those things."

Price's character most closely resembles Susan Sarandon's Jane Spofford from the movie, but Price stresses the differences. "To try to emulate another actor's performance is really dangerous," she said. "We're different girls, too. We're not playing the exact same characters."

It's not Charmed. "Well, it's obvious they'll make the comparisons, because it's a story about witches," Price says. "But like everything, ... people want to identify what it is with something before, because that lets them know what they're gonna be watching. And I think once they start to watch, they'll see that it's a completely different show, obviously. Different characters, different writers. The set."

Rue agrees. "I think it's very different from Charmed. Charmed is so much more kind of, like, tongue in cheek, and there were creatures and other worlds and demons and things like that, and there's not that here. It's, I don't know, a little more grounded in reality."

Price: "It is a charming show, but it's not Charmed."

It's not Desperate Housewives meets Harry Potter. Price says the comparison arose "because our pilot had a voice-over that opened the first couple of scenes, and that's a great device to get the story sort of out and told without having to do so much exposition. And it is a small town, but I think that's kind of where the comparisons stop. It's wonderful to be compared to shows that were successful, but we want to be our own thing, obviously."

Not that they can put their fingers on what Eastwick is, exactly. At least, not yet.

"I think that's the thing," Rue says. "When you're on a first-season show, you spend a lot of time trying to figure out what exactly it is that, you know, you want to do or put out there or what clicks with what. Making sure everything kind of blends together. We're shooting episode six now, and I think we've found a nice sort of rhythm, and now all the characters are sort of weaving themselves together a little bit more, and tonally everybody's coming, you know, either down or up or over and getting onto the same page, which is always, I mean, always the way in a first season. Everyone's like, 'Should I step here?' and 'Oh, no, no.' It's like finding your footing, so I feel like we've found that and now there's a nice—it's a lot funnier. ... It's definitely become, I would say, a comedy."

Eastwick premieres Sept. 23 and will air Wednesdays at 10 p.m. ET/PT. 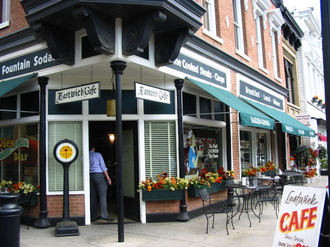 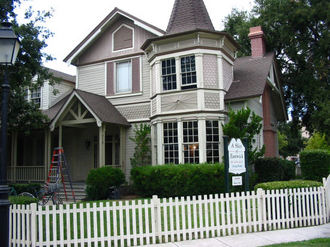 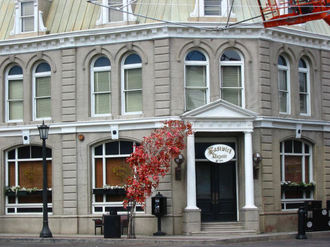 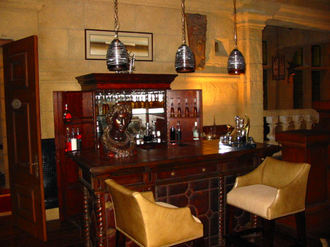 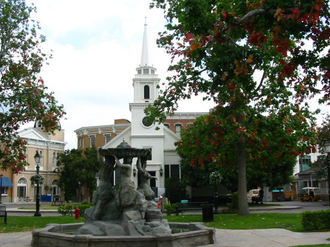