40 kindest and cruelest things ever said about M. Night Shyamalan

M. Night Shyamalan, who's been making films since he was a teenager, turned 40 a few days ago. He became a household name with The Sixth Sense, but from there, he's been on an oscillating but ultimately downward trajectory in terms of both critical and box-office reception. And boy, do people hate his most recent flop, The Last Airbender.

But we're rooting for Shyamalan, if only because he still makes a damned exciting trailer. For his birthday—to help him reflect and get back on track—we present this list of the 40 kindest and cruelest comments about his work we could find. Sometimes his best critics are also his worst detractors, and sometimes he's his own biggest fan.

1. "You can see the genius in his filmmaking even back then. I mean, he's doing special editing, he's doing parallel cutting, he's editing in music. To think this is before we're driving."—Brian Rosenstein, childhood neighbor, Christian Science Monitor, July 28, 2004

2. "Despite being an inflated, polished-to-an-anonymous-shine Disney deal, M. Night Shyamalan's The Sixth Sense has its nervous thumb on something, a sharp regard for miserable preadolescent disconnectedness, and for how everyday life can ripple with fear. Too bad it ends up being a play date in the Ghostneighborhood."—Michael Atkinson, The Village Voice, Aug. 3, 1999

3. "Because it unfolds like a garish hybrid of Simon Birch and What Dreams May Come, with some horror-movie touches thrown in to keep us from nodding off, The Sixth Sense appears to have been concocted at exactly the moment Hollywood was betting on supernatural schmaltz."—Stephen Holden, New York Times, Aug. 6, 1999

4. "I don't think it's venturing too far into hyperbole to call this, the followup to The Sixth Sense from writer/director M. Night Shyamalan, a work of transcendent filmic genius, one that acknowledges the audience's expectations, confounds them, rebuilds them, and ends up using them to brilliant, astonishing advantage."—MaryAnn Johanson, FlickFilosopher.com, Nov. 17, 2000

5. "Unbreakable is at once flagrantly absurd and stubbornly mournful. To his credit, Shyamalan sticks to his guns; the grating incongruity persists at a deafening pitch until it finally splits the film wide open."—Dennis Lim, Village Voice, Nov. 21, 2000

6. "Shyamalan's movies are great simply because they have such inspired belief in themselves. ... Whatever your final verdict, you could do worse than enjoy one of the most fertile minds in Hollywood."—Desson Howe, Washington Post, Nov. 24, 2000

8. "Shyamalan's by-now trademark spookiness is starting to play like a CD consciously designed to duplicate the success of an album that sold 10 million copies."—Mike Clark, USA Today, Aug. 1, 2002

9. "M. Night Shyamalan's Signs is the work of a born filmmaker, able to summon apprehension out of thin air."—Rogert Ebert, Aug. 2, 2002

10. "Mr. Shyamalan never gives us anything to believe in, other than his own power to solve problems of his own posing, and his command of a narrative logic is as circular—and as empty—as those bare patches out in the cornfield."—A.O. Scott, New York Times, Aug. 2, 2002 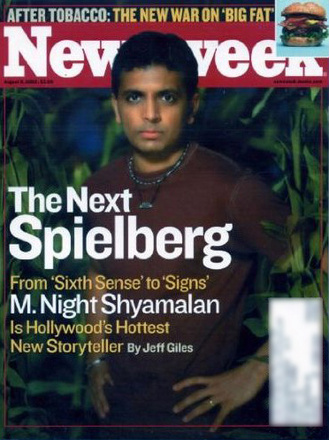 12. "Shyamalan has found a spare, taut style that's all his own. Defiantly old-fashioned, he's come up with something new: horror movies that pull on the heartstring, the tear-jerker terror flick. A neat trick indeed."—David Ansen, Newsweek, Aug. 4, 2002

13. "I don't use that word casually, but I believe he has elements of genius in him—as a writer, as a storyteller and as a film director."—Bruce Willis, Newsweek, Aug. 4, 2002

14. "[T]he oh-so-polished presentation leads to the nagging question: Is M. Night a filmmaker or is he a marketing plan?"—Michael Agger, Slate.com, July 30, 2004

15. "Since that formula—moody, supernatural story, way more reliant on plot than characterization, ending with some mind-bending twist—worked for Shyamalan in such a big way, he hasn't dared to try anything different since, and the returns have been diminishing with each subsequent outing. ... Let me be more succinct: Hack-a-doodle-doo!"—Tara Ariano, MSNBC.Com, Aug. 2004

16. "I love to watch his films. They're smooth, creepy, intelligent, full of revelatory dialogue, and they don't have that Bourne Supremacy need to roar along at 4,000 feet per second. The camerawork is traditional, the editing mature, the music judicious. Why, it's like he's over 50!"—Stephen Hunter, Washington Post, July 30, 2004

17. "The conversations I had leaving the theater were not of a religious/philosophical nature, but akin to the ones I had as a 10-year-old about why the Howells and Ginger brought so many clothes for a 3-hour tour."—David Edelstein, Slate, July 30, 2004

LADY IN THE WATER

18. "I was blown away by the twist at the end of The Sixth Sense ... Shyamalan was still a showman back then, before he began to fancy himself a shaman—or is that shyaman? Now he just writes dead people."—David Edelstein, New York magazine, July 16, 2006

19. "[W]hile Shyamalan may be a narcissist with delusions of grandeur, he's also a filmmaker of rare talent and creativity (these are hardly mutually exclusive categories, after all), and however lousy Lady in the Water proves to be, he deserves to survive this summer of embarrassment and live to film again."—Ross Douthat, Slate.com, July 20, 2006

20. "The low star rating isn't just for pretension or ineptitude, it's for hypocrisy and cowardice, too."—Jim Emerson, RogerEbert.com, July 21, 2006

22. "M. Night Shyamalan isn't a visionary so much as a megalomaniacal bully."—Chez Pazienza, ex-news producer, July 2006

23. "M. Night Shyamalan, who blew off a multi-million-dollar, multi-picture deal with Disney to get his thrill-free-thriller Lady in the Water made, was rewarded for his megalomania with two RAZZIES: He was named both Worst Director and, for casting himself in a pivotal role in his own film, was also chosen as Worst Supporting Actor."—Press release, 2006 Razzies winners announcement

24. "I respect Night as a filmmaker and loved working with him. I supported the premise of [Lady in the Water] and what he was trying to accomplish, but sometimes movies work and sometimes they don't."—Alan F. Horn, president of Warner Brothers Entertainment, New York Times , June 2, 2008

Secretary of Defense: The Sixth Sense, Signs, The Village, all very clever films. But can you use your amazing idea brain now to help us stop the terrorists?
M. Night Shyamalan: What if ... what if it turns out they aren't terrorists? But they're actually werewolves? From the future?
SOD: No, they're terrorists. They've been linked to Al Qaeda.
MNS: But what if Al Qaeda, it turns out, is the group being terrorized? By aliens?
SOD: No, no. That's not an idea, that's a twist. We need ideas.
MNS: How about we make everyone think that terrorists attacked us? But really, we were all already dead.
SOD: Get him out of here.

26. "The writer-director's disintegration from robust artistic health to narrative incoherence, from hitmaker to box-office loser, has an almost tragic trajectory. It's a saga worthy of being told by the young M. Night Shyamalan. Perhaps, with his next film, he'll have a surprise twist of cinematic brilliance that will explain and atone for the creepy stuff that's been happening to him."—Richard Corliss, Time, June 12, 2008

27. "It is no doubt too thoughtful for the summer action season, but I appreciate the quietly realistic way Shyamalan finds to tell a story about the possible death of man."—Roger Ebert, Chicago Sun-Times, June 12, 2008

28. "No one will watch any of Shyamalan's recent films twice. A movie that features Wahlberg suggesting everyone try to outrun the wind can barely be watched once."—Kyle Smith, New York Post, June 13, 2008

29. "It almost dares you to roll your eyes or laugh at certain scenes that are supposed to be deadly serious. But, you know what, I appreciated this creatively offbeat, daring sci-fi mind-trip."—Richard Roeper, Chicago Sun-Times, on The Happening, June 16, 2008

32. "If any movie ever warranted a class-action lawsuit against the filmmakers, it's The Last Airbender."—Keith Phipps, AVClub.com, June 30, 2010

33. "The Last Airbender is an agonizing experience in every category I can think of and others still waiting to be invented."—Roger Ebert, June 30, 2010

34. "Once 'A film by M. Night Shyamalan' promised suspense and power, but that was 11 years ago. We must stop enabling him and not pay to see this garbage."—Matt Pais, Chicago Now, June 30, 2010

35. "He hasn't mastered the craft yet, but M. Night Shyamalan may be on to something with this action-movie thing."—David Bowles, USA Today, July 3, 2010

37. "But Shyamalan's strengths as a director are formidable, and unlike other auteurs we've written off, we're genuinely hoping he can get his groove back."—Bilge Ebiri, New York magazine, in "Don't Give Up On M. Might Shyamalan," July 7, 2010

38. "If you describe someone as 'a filmmaker of rare talent and creativity,' as I did, and then they follow your vote of confidence by releasing Lady, The Happening, and now The Last Airbender (currently the worst-reviewed movie of the summer, below Furry Vengeance and Sex in the City 2) on an unsuspecting public ... well, let's just say I wouldn't blame anyone who cited Shyamalan as exhibit A in the case against my critical acumen."—Ross Douthat, New York Times, July 7, 2010

This Week in Genre History: The backlash to 'The Village' was the twist we should've seen coming
M. Night Shyamalan says his Tales from the Crypt reboot for TNT is now six feet under