When I watch a sci-fi movie, it's no picnic inside my head. I'm simultaneously a scientist and a geek, and the two maintain an uneasy truce—and you never know what scene in a movie will start up hostilities.

I've been pretty generous about movies here on Blastr before, and perhaps I'm mellowing in my not-quite-middle age (ahem), but still ... I'm finding that what ticks me off most are mistakes in movies that should've known better. Smart movies, or movies by smart people. That makes little mistakes loom large. It's like being served a magnificent dinner and finding a weevil on your plate. 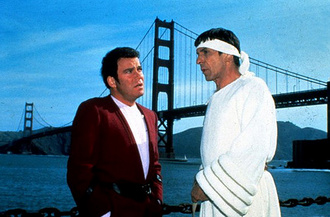 Look, I'm a major Trek dork. And I don't fret too much about transporters, warp drive or the artificial gravity dropping to 0.8 after every battle.

But I have to draw the line at warping to the sun.

It's a Trek cliché, used in the series and in the fourth movie. You warp to the Sun, slingshot around it and voila! You go back in time!

And I'm not going to rail against time travel. Nope. I'm willing to assume treknobabble for that and forgive it because it's the future and time travel is as easy as writing a line in the script for it. What really cooks my tribble here is that it takes several minutes to warp to the sun.

A photon, a particle of light, takes a little over 8 minutes to get from Earth to the sun—but that's the slowpoke in the Trek universe! When the Big E is warping to our nearest star it should take less time. A lot less. Sulu shouldn't even have time to say "our speed is off the scale" before the sun's in their rearview mirror.

Whales and transparent aluminum and Spock on LSD I can buy. But the sun is a warp too far.

#4: The Empire Strikes Back 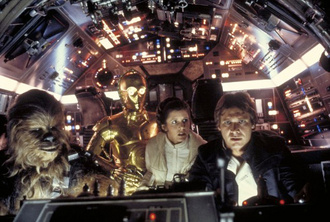 Sure, when you think astronomy errors in Star Wars you think Kessel run. But that doesn't bug me so much, given the somewhat overblown nature of the movie itself (and maybe Han being a bit of an astronomy doofus). No, I'll save my indignation for the second movie, the one everyone says is the best of the three: The Empire Strikes Back.

In a pivotal scene, Han is in the Millennium Falcon with TIE fighters in hot pursuit. He flies into an asteroid field, and then dodges, ducks, dips, dives and dodges. The TIE pilots, who probably know more astronomy but less about piloting than Han, slam into rocks and explode. Hurray!

But don't get cocky, kid. That asteroid field can't exist.

Our own asteroid belt is always shown in movies as a flying swarm of zillions of rocks. But the reality is a bit more sparse: Asteroids are really far apart, like millions of miles apart on average. Chances are you could stand on the surface of an asteroid and not even be able to see another one with your naked eye. In fact, if you took all the asteroids in our Main Belt and lumped them together they'd make a single rock about 800 miles across. That's less than half the size of our moon! Spread that out over a few trillion cubic miles and you get the picture.

Poor Han. His hiding place has disappeared in a puff of logic.

And don't even get me started on those giant tube worm thingies.

#3: Attack of the Clones

Yes, I'm that much of a jerk to include a second movie from the Star Wars sexology (or whatever you call a clutch of six movies—perhaps a "sarlacc").

OK, I know sounds in space are de rigueur, and it's actually a movie exception that doesn't have them (like Firefly, hurray!). I also know that directors add them because we humans are used to whooshing sounds as things go past us, and I'm willing to overlook such unscientific puffery since it doesn't really matter to the overall story. And honestly, it does feel funny when big ships silently fly past.

But in Clones, it's actually a plot point.

Obi-Wan has followed Jango Fett into the Geonosis system. As they swoop and swerve, Fett releases some sort of depth-charge-like device, which Obi-Wan tells us is a "seismic charge." And sure enough, when it detonates we hear a WHOOM noise as a giant shock wave moves through space.

Perhaps in space no one can hear you scream, but the folks who unwisely were sitting in the theater with me that day certainly heard mine.

#2: E.T. The Extra-Terrestrial (and really any movie showing the moon) 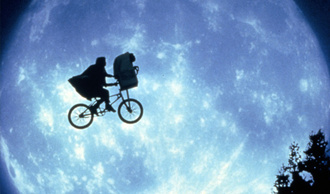 I don't mean to pick on E.T. necessarily, when every movie ever showing the moon gets this wrong. But it was the first time I ever noticed it in a movie, and heck, I saw it when it was in the theater, so this has precedence.

When Elliott first discovers E.T., the cute little spud was hiding out in the tool shed. We see Elliott cautiously walking toward it, with the crescent moon hanging in the background.

OK, fine. But then the next night, Elliott goes out again, and the moon is in the same phase and the same position in the sky!

The problem with this is that the moon orbits the Earth, so it's in a different spot in the sky every night at the same time. And the phase changes too, going from thin crescent to full and back to crescent again once a month.

Movies get this wrong all the time. They also screw up by having the full moon the night after a solar eclipse (it's two weeks later), or the moon's crescent backwards, or the moon setting in the wrong direction.

Hey! Judge me if you like, but I warned you about the level of nitpickery here. And this mistake is the astronomer's equivalent of an annoying person jabbering away on their phone next to you in the theater. But I don't generally want to stab screenwriters in the eye with my soda straw, so maybe I'm being too harsh here.

Still, that leaves me with my all-time favorite movie science gaffe: 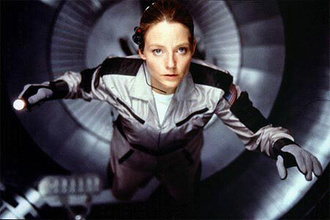 Yes, Contact. Let me be clear: I loved this movie. From the incredible opening sequence (one of the finest ever filmed), to its depiction of astronomers, to the heavy philosophical debates of the nature of science versus faith, to the very nature of what it means to be human, this was a great movie (and an even better book). And, of course, the science in it, even when speculative, was rigorously consistent. It was written by Carl Sagan, after all.

But then there's that line. That one line.

Ellie Arroway is talking about the chances of life in the galaxy as she looks up at the night sky. And she says this:

Like I said, in a movie that took such pains to be accurate, this line sticks out like a Marvel character in a DC comic.

Ironically, we now know, just a few years later, that the fraction of stars with planets is far, far higher than Ellie's estimate, and may be as high as half. That removes a factor of a million from her equation, and makes it at least a bit more likely that there is one other intelligent civilization out there in the Milky Way. And we're not too sure about those other factors yet, either.

The children of Childhood's End: movies and TV influenced by the sci-fi classic.
Interview: Sarah Scoles on Jill Tarter, the inspiration for Contact's Ellie Arroway

Phil Plait is an astronomer and a geek who loves sci-fi movies. Seriously. And also? He can kill you with his brain.