The Last Exorcism is another one of those horror movies shot "documentary style" as we follow a preacher around with cameras while he tries to expose exorcism for the fraud that it is. When things start getting really freaky, it happens from a single camera's point of view. One time, the possessed girl even grabs the camera while everyone else is asleep.

So it's not a real documentary, but it's got more gritty realism than other Hollywood horror movies. Director Daniel Stamm, producer Eli Roth, and stars Ashley Bell and Patrick Fabian revealed what they did for real in a series of interviews on Aug. 24 in Beverly Hills, Calif. 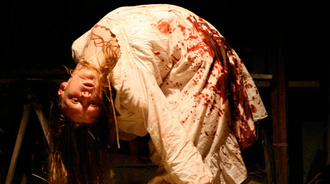 That freaky Exorcist-looking girl with her back bent the wrong way is no special effect. Ashley Bell plays the possessed Nell, and she has a natural ability that would make yoga teachers freak out.

"I didn't know she could do that," Stamm said. "That's not why I cast her. She is double-jointed. She can pop out her shoulder like that. Two days before we actually shot the exorcism scene, we sat in the hotel lobby and I said, 'Do you have any idea? Anything you want to try out for that scene?' She goes, 'Well, why don't I do this?' She stood up and she bent over backwards. I was like, 'You stay as you are, I'll go out and rewrite the scene.' Now that has become kind of the big centerpiece of the film. It's the poster, it's the whole marketing campaign."

The camera is really your eyes 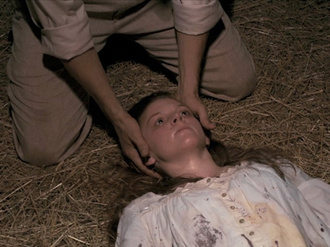 They started making Last Exorcism before Paranormal Activity and Cloverfield came out with their first-person cameras. Yeah, there had been Blair Witch, but the idea wasn't so much fake documentary here. It was to turn the camera into your eyes!

"You have a filmmaker like Daniel that truly understands how effective it can be by eliminating that fourth wall," Roth said. "By eliminating makeup so that, really and slowly, the camera becomes the audience's eyes, until eventually, literally when it's time to get the hell out of there, we are running for our lives trying to outrun our destiny. You can come up with something incredible and fresh and truly terrifying. The fun was doing it in this docu-style, and certainly when [Nell] takes the camera, you are literally in the hands of an unstable narrator."

Just to be safe, they had a real exorcism 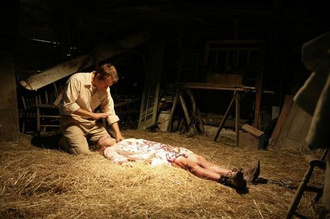 Ashley Bell was only the second actress Stamm saw for the role of Nell. He had a good feeling about her but held his own exorcism as her final test her for the part. Bell became fully prepared to play Nell's exorcism, and if she had any real demons they were probably expelled, too. "The actual audition was getting exorcised in the room for the callback," Bell said.

"That was probably the most fun audition I've ever been a part of. I was sitting in a chair and I asked to lay on the carpet. It was in Lauren Bass' casting office in West Hollywood. I was laying on this carpet, this cameraman was standing over me, I started to contort my body and scream, and this man was summoning this thing out of me. I just said, 'My parents would be so proud.'" 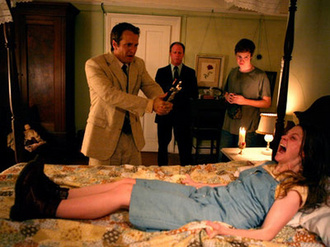 The film begins as Cotton Marcus sets out to prove that exorcisms are fake. To win the role, Stamm asked Patrick Fabian to prepare his own sermon. Fabian delivered. The clips in the movie of Cotton preaching to his ministry come from days of filming Fabian at a church.

"There were two days I preached myself hoarse, basically," Fabian said. "I kept waiting when I was watching the film, like, where's that 10-minute sermon I'm going to have? There's just enough to give you a hint of what is behind it, but in order to get that, we laid it out and ran around for two days up on the pulpit."

Real fire and bugs, no CGI 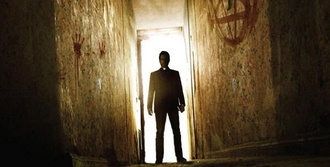 The film climaxes in a cult ceremony out in a field. A lot of Hollywood movies would add all the cool effects later with computers, or shoot the whole thing on green screen. Bell was really out in a field with flames and insects.

"I was laying on that table, it was about four in the morning in the middle of this field in Louisiana," she said. "There's a huge crowd of people, 30 feet of fire behind me, lights in the sky, everyone's out. I was like, 'I have the best seat in the house.' There were all these bugs flying around and I was screaming. Then of course a flaming moth flew in my mouth."