Though writers are usually the originators of all those great sci-fi moments we know and love from the movies, actors deserve some credit. Not only do they embody all those iconic characters we have on our T-shirts, but they're also capable of remarkable acts of spontaneous creativity, and it's often those moments that are more memorable than the planned ones.

As a salute to improvisation and its power in the movies, the guys at Total Film have put together a handy compendium of the 50 greatest improvised scenes of all time. Not surprisingly, quite a few them are from sci-fi, fantasy and horror pictures, and we're highlighting the five top genre slots here. 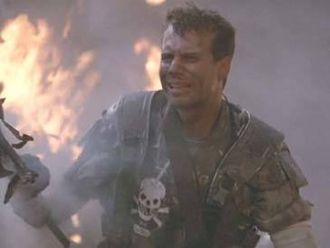 The Scene: As the xenomorphs close in, and the Colonial Marines seem to have no way out, Hudson (Paxton) shouts an oft-quoted line: "Game over, man! Game over!"

The Improv: It's basically the same scene, but the addition of the line was Paxton's. Here's how it was supposed to go:

HUDSON (kicking rocks) Just tell me what the f--k we're supposed to do now. What're we gonna do now?

BURKE (annoyed) Maybe we could build a fire and sing songs. 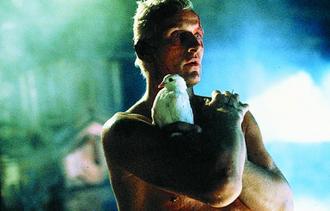 The Scene: Finally at the end of his infamous existence, the Replicant Roy Batty (Hauer) stands in the rain and says his famous last words: "All these moments will be lost like tears in rain. Time to die."

The Improv: Batty's scripted speech was actually a good deal longer, but Hauer felt it wasn't character-appropriate for the Replicant to be quite so wordy in his final moments. He pared the speech down to the lines he really liked, and added what is perhaps the best part: "Time to die." 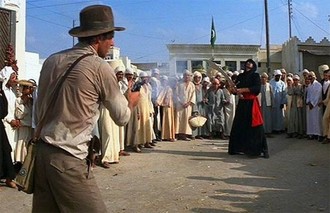 The Scene: In a crowded Cairo market, a man in black faces off against Indiana Jones, whips out a deadly-looking scimitar, and begins spinning it around with threatening skill. Jones, looking annoyed and tired, pulls out his revolver and shoots the swordsman.

The Improv: This might be the most famous (and funniest) improv in genre movie history. Ford looks annoyed and tired because he was annoyed and tired that day. A lengthy and spectacular whip vs. sword duel was scripted for the marketplace, but on the day it was set to be shot Ford arrived on set with food poisoning and couldn't do the stunts necessary to make the sequence work. After conferring with director Steven Spielberg, Ford opted for a quicker end to the battle, and a classic scene was born. 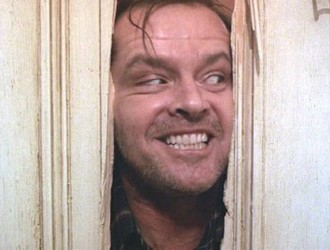 The Scene: A crazed Jack Torrance (Nicholson) begins hacking at a door with an ax while his terrified wife Wendy (Shelley Duvall) pleads with him from the other side. After he's carved a significant chunk out of the wood, Torrance shoves his head into the opening, sporting a sinister grin, and shouts, "Heeeeere's Johnny!"

The Improv: Jack was always supposed to hack at the door and reach through for Wendy, but the classic line was Nicholson's own addition to the scene. It's a wonder he got it past notoriously controlling director Stanley Kubrick, but if you've ever seen the "Making The Shining" documentary shot on set by Kubrick's daughter Vivian, you know the pair seemed to have a pretty healthy collaboration. 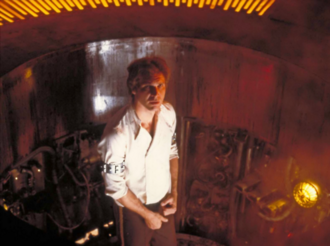 The Scene: Lured into a trap on Bespin by Darth Vader, Han Solo (Ford) is about to be put into a carbonite casing to be shipped back to Jabba the Hutt by bounty hunter Boba Fett. As he's lowered into the machine, Princess Leia (Carrie Fisher) says, "I love you." Ford then famously utters that most Han Solo of Han Solo retorts: "I know."

The Improv: The scripted scene had Solo replying with "I love you, too." But Ford thought that just wasn't Han, so he ad-libbed the now-iconic , character-defining line. George Lucas wasn't too happy, but director Irvin Kershner backed Ford up, and the result is one of the great Star Wars moments.

For more iconic improvs from sci-fi—including Inception, The Dark Knight, Shaun of the Dead and X-Men: First Class—and classic films like Casablanca, Taxi Driver and Jaws, check out the full list at Total Film.