5 reasons this new Ghost Rider will be worth watching. No, really.

We were was lucky enough to fly to Romania last year to check out the set of Ghost Rider Spirit of Vengeance and chat with the cast and crew. Now, now. We can hear you getting your panties in a bunch about that last Ghost Rider film. We get it. We agree.

But from what we saw on the set, which included a weapons room that would make you weep with happiness, a gorgeously designed cave, motorcycles that made us consider a few years in jail for theft worth it, and Violante Placido, we think it's going to kick some serious butt.

In the film, Johnny Blaze (Nicolas Cage) is hiding out in Eastern Europe, trying to get a hold of his inner skeleton. He meets a Rom woman named Nadya (Placido) and her son Danny (Fergus Riordan), who just happens to be Devil's (Ciaran Hinds) spawn. Daddy needs a new vessel since he's decomposing. Ghost Rider isn't about to let that happen.

They team up with a drunk warrior monk (Idris Elba) to save little Satan Jr. Add Johnny Whitworth as Blackout and an appearance from Christopher Lambert and you have a recipe for some flaming fun. Here are five ways this Ghost Rider film is going to be way better than the first.

It's way darker than the first film

Taylor told us, "We like the first movie for what it is. It's cool. It's a Walt Disney movie," he laughed. "Really and that's what Nick said about it, too, which is that it's a great take on the movie. It's like a Walt Disney version of the Faust story and it's lit that way, and it feels like a Disney ride and we like that. This isn't that at all, so we wanted to just completely depart and make it a whole thing. We're picking up this character, whatever, five or six years later, and he's in a much different place. He's a much different guy. He's in Europe, it's a different bike. The physical transformation that happens to him has progressed where he doesn't look the same, the skull looks different, everything looks different. It's changed and progressed. Think of it like an illness and it's progressed and this is in the final stages of that illness. It's gonna feel a lot different from the first movie."

The bikes are seriously kick ass

"I was blessed with a really good motorcycle on this movie," says Cage. [The Yamaha VMAX. Idris Elba's character rides a 2010 Ural Solo.] "Without sounding like a Yamaha commercial, but that bike is totally in tune with what you want it to do. Maybe it's because the company makes musical instruments, but it's like this artistic relationship man and motorcycle and it's a hell of a lot easier to get that bike to do what I want it to do while filming. On the other movie I had a raked front-end chopper. When you got 400 people watching you making a movie, it doesn't go where you want it to go. It's a lot of pressure. This bike performed effortlessly. I'm completely convinced that these are the best bikes in the world."

It's classic Nicolas Cage, which means it's trippy

Taylor talked about some of the crazy scenes. "Well this exorcism scene is going to be excellent. We shot half of it this morning and we shoot half of it at the end, but we're really welcoming ... you know there's like two different versions of Nicolas Cage. There's sort of mainstream Cage and there's balls-to-the-wall Cage, and we're definitely welcoming the demon. The performance we're getting from Cage, it's going to be one of those epic Nic Cage performances that people talk about." Cage pooh poohed the idea of playing a normal guy when we spoke to him. And really, who wants to see that? 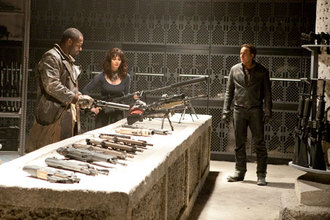 Elba, who we spoke to after checking out the wine room in his cave and his character's giant uzi (He said, "Yeah baby, my uzi weighs a ton.") told us, "Moreau is supposed to be a very religious man. A monk, in fact. But he's got his vices. He's traveled the world. I'm not sure if his faith is as strong as it should be, but in any case he's a righteous man. His journey in this film is to seek out Danny, and to protect Danny for the day of prophecy. And basically he goes about that by any means necessary. He meets up with Johnny Blaze and Johnny Blaze thinks, 'Who is this guy? This crazy guy?' 'Cuz you know I like a drink and I'm on the bikes and I'm prepared to go for it. It's actually one of my favorite characters to play; I get to be a little bit more comical than usual and that's fun."

Hinds, who was about to go do a wire work scene that he told us scared the crap out of him described his scenes with Nic. "It's very funny, because the scenes with Nic, basically, I just see something coming and have the lights punched out of me. That's scene one. Then I come to, and have a couple of words with him, and then I go on the run. And then the next time I meet him, he just picks me up and throws me way up into the sky, and then lashes me back down into the inferno that's called Hell. That's my work with Nic. I don't think he tolerates devils," he laughed. "I don't think he likes to objectify them, talk to them, rationalize them, I think he's on a mission to get the hell out of here. But...he is one of the most unique actors in the world. Absolutely unique. His style, his rage, his commitment, his passion, his imagination."

Are you guys excited to see Ghost Rider Spirit of Vengeance?