When ABC's re-imagined sci-fi invasion series V ended its four-episode run last year, fans were left with several cliffhangers: Father Jack (Joel Gretsch) was mortally stabbed; Valerie (Lourdes Benedicto, below) learned she was pregnant (possibly with an alien baby??); FBI agent Erica Evans (Elizabeth Mitchell, above) found out that her son, Tyler (Logan Huffman), was aboard the alien mothership with Lisa (Laura Vandervoort), whom we learned was the daughter of Queen V Anna (Morena Baccarin); and Chad (Scott Wolf) discovered that he had a lethal brain aneurysm.

You can catch up when ABC airs a clip show V: The Arrival next Tuesday at 10:06 p.m. ET, but to prepare you for the return of new episodes on March 30 (at 10 p.m.), executive producer Steve Pearlman offered up some spoilers for the remaining eight episodes this year and talked about what's new and different.

In particular, new show runner Scott Rosenbaum will ratchet up the suspense and paranoia, and the new batch of episodes will offer up an explosive, OMG moment every week, Pearlman said.

"In the pilot, spaceships showed up, it was a very tense moment," Pearlman told a group of reporters visiting the FBI office set of V near Vancouver, Canada, on Monday. "The title of the first episodes after the pilot is 'There Is No Normal Anymore.' And I think that kind of became the theme for the season in many ways. But as you get further and further away from the pilot, from that event of the spaceship showing up, how do you maintain the suspense? How do you maintain the paranoia of, you know, a V could be anywhere? We established in the pilot that Dale [Alan Tudyk], Erica's partner, was a V. And that led to a certain degree of paranoia that was set up right there in the first episode of, 'Oh my God, anybody could be a V.' So I think that was one of the things in particular as we launched into the second batch of episodes that we really wanted to try and dial up." 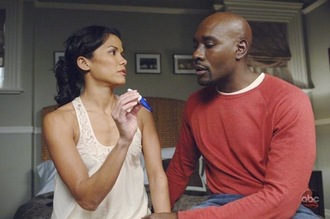 ♦The cliffhangers will be resolved quickly. "The challenge has been as we come back to the new batch of episodes, you can't just ignore those things," Pearlman said.

♦Someone dies. "There will be a character of significance that dies during the eight episodes," Pearlman said. "I can tell you. But I think that's going to be a surprise." 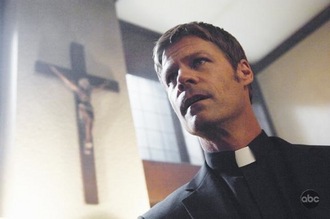 ♦The theme of the show is now "Mom vs. Mom." "Anna is the mother of the Vs, and Erica metaphorically is the mother of humanity, and I think that that is ... the core battle in this show," Pearlman said. "So I don't think that it's overstating that. And I think that one of the longer arcs over the course of this season that we're playing with is that as ... Erica sees her own son get kind of sucked further and further into the web of the Vs and feels that she's losing her own son, Anna sees the same with Lisa, that she's losing Lisa."

♦Every episode will contain a major revelation. "I think the goal certainly is in every episode to be able to give the audience something that either is kind of an 'Oh, s--t!' moment or an 'Oh, my God!' moment, ... whether that's a ... V thing or just a smaller thing ... with our own characters."

And what about the homages to the original miniseries: Someone eating a guinea pig, the alien baby?

"If you're going to do a remake, you can't just repeat," Pearlman said. "The audience has already seen that. And so you have to take essentially what was done and in effect pay homage to it, and I think that's what we're aiming to do. And I think you will see in the next batch of episodes that we're shooting, I think there will be some vermin that may show up in one of the episodes. There's definitely going to be some storylines involving procreation. And I think that the specific reference to the old series where Diana ate the ... guinea pig, I think, in the first episode back, there will be something that will top that that I think will be kind of exciting."

Well, how can we NOT tune in now?? Will you be watching when V invades the airwaves again?

We'll have more coverage of V closer to the midseason premiere.