6 Fringe questions Leonard Nimoy can answer (and 3 he can't)

Tonight's episode of Fringe, "Momentum Deferred," promises finally to let us see what happened between Olivia Dunham (Anna Torv) and William Bell (Leonard Nimoy) after the season finale last year. So far, Dunham has focused on recovering from her trip to the parallel universe, where Bell greeted her in New York's still-standing World Trade Center twin towers.

Nimoy returns for his second on-screen appearance as Bell, and promos for the episode show Dunham finally recalling her meeting, with Bell asserting she is only just beginning to realize her powers. In a call with reporters on Wednesday, Nimoy previewed his episode and actually answered some questions about what's in store for Bell.

Here are the six juicy questions Nimoy answered, and three more that he dodged. Fringe airs Thursdays at 9 p.m. on Fox.

1. What does Bell do "over there," and with whom does he associate? It's cool to hide out in an alternate dimension, but you've still got to have a life there. Bell's not just waiting for FBI agents to find the portal to his world, but he's so far up the chain of command that he just sits back and delegates. "William Bell is sort of a 'master of the universe,' a brilliant man, very wealthy man, very powerful," Nimoy said. "We'll find out a lot more about him in future episodes."

2. What does Bell want with Olivia? We'll find out tonight. "In the episode, ... the scene is between myself and Olivia," Nimoy said. "I think the most important thing is that ... we will get a sense of what his relationship is with Olivia. There are some very intriguing and very intense moments that take place. ... The rest remains to be seen."

3. What's Bell's endgame? Tonight's episode will tell us at least a version of what Bell is aiming for. Of course, whether what Bell says is the truth could still be interpreted: This is Fringe, after all. "I think we'll learn a lot more than we have known in the past about what their relationship is all about and what William Bell's intentions are," Nimoy said. "Or at least we will be told what his intentions are. We're not really quite sure that everything that he says is accurate or true."

4. When will Bell be back again? After tonight's episode, which Nimoy shot a few weeks ago, he expects to be back at work in another two weeks. So about a month or so in air time before his next appearance. "I'm waiting to see what these terribly imaginative writers come up with for the future," Nimoy said. "I'm expecting that I probably will be going back to work for them before too much longer. I'm looking forward to what they send me on the page, but right now we go a long way tomorrow night in discovering what William Bell is all about."

5. Are they shooting two Bell episodes at a time with Nimoy? No. Although we reported this summer that writer/producers Roberto Orci and Alex Kurtzman planned to shoot back-to-back Bell episodes, Nimoy is sticking to one episode at a time. "I don't know where that came from," Nimoy said. "My understanding is that [tonight] is the one episode. I did this work a few weeks ago, and that work is in the show. ... I don't think we did work for more than the one episode. Then I will be going back to work for them in about two weeks to do one more episode. Beyond that, we're in discussion. I don't think it's true that we're doing more than one episode at a time."

6. What is Bell like when he's not having interdimensional meetings? Most of what we know about Bell is still hearsay. A voice-over and a cameo don't give us much sense of his character. Tonight, Nimoy promises you'll start to know who William Bell really is. "It's great fun to be building the character from scratch with certain givens but so much to be developed in terms of the way he talks, the way he walks, idiosyncrasies, his tastes," Nimoy said. "Is he difficult, is he gruff, is he charming, is he a nice guy? What are his real intentions? All of these are great exploration for an actor. I think you'll see tomorrow night one very strong aspect of him and certain idiosyncrasies that are being developed, but I do think there's a long way to go. I think there's a lot to be discovered, and I'm looking forward to discovering it with the audience." 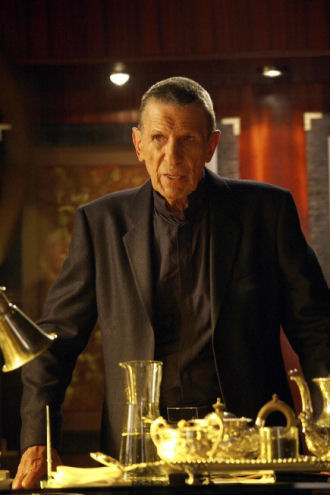 7. When will Bell and Walter Bishop (John Noble) face off? This is the showdown Fringe fans are waiting for. Of course, they're holding that card for later. "Unpredictable at the moment," Nimoy teased.

8. If there are duplicate people "over there," is there a second William Bell? As if one Bell weren't enough, but it's the logical question. "I don't think I can really answer that question very specifically right now," Nimoy dodged.

9. Finally, is Bell good or evil? The elusive Bell is the original mastermind behind the fringe science, but does that make him the Big Bad, or do the ends justify noble means? "Ah, ah, ah, that's a really wonderful question," Nimoy said. "Time will tell."