Aliens is not just a terrific science fiction film—and a stellar war flick—it's also the last indisputably great movie in that series. In a previously unpublished interview, conducted just after Aliens' 1986 release, writer-director James Cameron clears up a few issues audiences had with his landmark sequel.

One of Cameron's major additions to the Alien mythos was the Alien Queen, a titanic beast that, toward the end of the film, went toe to toe with Sigourney Weaver's Ripley. But where did the Alien Queen come from?

Here's the version of James Cameron's 'Aliens' that you never saw
The 25 scariest sci-fi movies ever made, from 'Aliens' to 'Invisible Man,' ranked 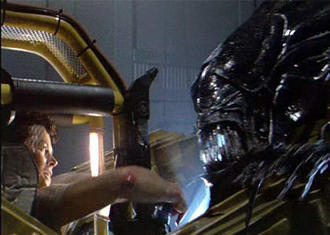 "Extrapolating from entomology (ants, termites, etc.), an immature female, one of the first to emerge from hosts, grows to become a new queen, while males become drones or warriors. Subsequent female larvae remain dormant or are killed by males ... or biochemically sense that a queen exists and change into males to limit waste. The Queen locates a nesting spot (the warmth of the atmosphere station heat exchanger level being perfect for egg incubation) and becomes sedentary. She is then tended by the males as her abdomen swells into a distended egg sac. The drones and warriors also secrete a resinous building material to line the structure, creating niches in which they may lie dormant when food supplies and/or hosts for further reproduction become depleted (i.e. when all the colonists are used up). They are discovered in this condition by the troopers, but quickly emerge when new hosts present themselves.

A question that had lodged in fans' minds for years was "Why do the Aliens kill some people and harvest others for implantation?" 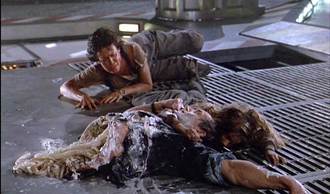 "One admittedly confusing aspect of this creature's behavior (which was unclear as well in Alien) is the fact that sometimes the warrior will capture prey for a host, and other times, simply kill it. For example, Ferro the dropship pilot is killed outright while Newt, and previously most of the colony members, were only captured and cocooned within the walls to aid in the Aliens' reproduction cycle. If we assume the Aliens have intelligence, at least in the central guiding authority of the Queen, then it is possible that these decisions may have a tactical basis. For example, Ferro was a greater threat, piloting the heavily armed dropship. Newt, and most of the colonists, were unarmed and relatively helpless, therefore easily captured for hosting."

Clearly, Cameron has done an immense amount of thinking about what the Aliens are. But where did they come from? 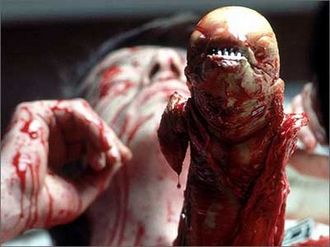 "In dialogue, I have Ripley specifically telling a member of the inquiry board, 'I already told you, it was not indigenous, it was a derelict spacecraft, an alien ship, it was not from there.' That seems clear enough. Don't ask me where it was from ... there are some things man was not meant to know. Presumably, the derelict pilot (space jockey, big dental patient, etc.) became infected en route to somewhere and set down on the barren planetoid to isolate the dangerous creatures, setting up the warning beacon as his last act. What happened to the creature that emerged from him? Ask Ridley. As to the purpose of the Alien ... I think that's clear. They're just trying to make a living, same as us. It's not their fault that they happen to be disgusting parasitical predators, any more than a black widow spider or a cobra can be blamed for its biological nature."

In Ridley Scott's 1979 trailblazer, Alien, the crew of the Nostromo encounter the Alien eggs in a chamber of a spaceship -- and inside that chamber was a lone, long-dead figure sitting in a chair who has come to be referred to as the Space Jockey. Who was it? 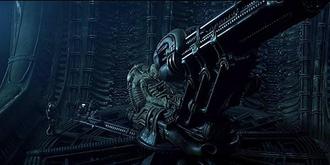 "Clearly, the dental patient was a sole crew member on a one-man ship. Perhaps his homeworld did know of his demise, but felt it was pointless to rescue a doomed person. Perhaps he was a volunteer or a draftee on the hazardous mission of bio-isolating these organisms. Perhaps he was a military pilot, delivering the alien eggs as a bio-weapon in some ancient interstellar war humans know nothing of, and got infected inadvertently. "How could the man who went onto the derelict not know something was wrong when he saw the dead gunner?" Well, [Nostromo crewmen] Dallas, Kane and Lambert saw the dead gunner and that didn't stop them. Human curiosity is a powerful force."

Most of the action in Aliens takes place on an asteroid referred to as LV-426. According to Cameron, the location of that asteroid is a direct homage to Alien. 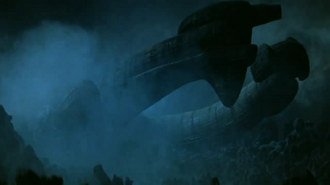 "The unnamed planetoid harboring the alien derelict ship, to which I gave the designation LV-426, was in fact a moon of a ringed gas giant, which was occasionally glimpsed in the sky in Alien. The gas giant does not appear in Aliens because the exterior scenes on LV-426 have an unbroken cloud cover or overcast, and the space scenes are handled in a cursory manner, advancing the story without dwelling on the wonders of interstellar travel, which so many other films have done so well, as their primary raison d'etre. You might say we approached LV-426 from the other direction, and the ringed gas giant companion was out of frame."

Aliens takes place 57 years after the events of Alien, with Ripley having spent those intervening years in hypersleep. How would she cope with that lost time and the advances of technology that have taken place while she was under? 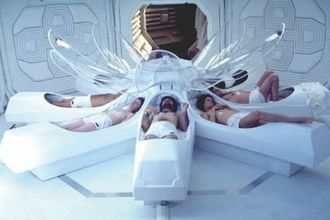 "First of all, ask yourself if an intelligent and willful person from 1930 could or could not adapt to the technology of 1987, given a few months of training. They had automobiles (including traffic jams), machine guns and airplanes then, only the specifics are different now. Conversely, however, who could have dreamed of the impact of computers and video on our current environment? A second point is that there have been 57-year periods in history where little or no social or technological change took place, due to religious repression, war, plague or other factors. Perhaps technology had topped out or plateaued before the Nostromo's flight, and the changes upon Ripley's return were not great. You decide. It doesn't bother Ripley, and it doesn't bother me."